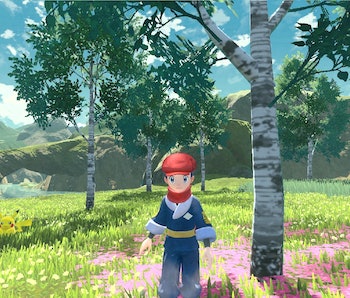 Pokémon Legends: Arceus is a bold new step for the Pokémon series.

Pokémon games typically follow a very well-established RPG formula where one trainer travels across a somewhat linear region, catching Pokémon and getting eight gym badges along the way. If they so choose, they can even bring the game online to trade Pokémon and battle with others.

Pokémon Legends: Arceus is different. The developers at Game Freak appear to have placed greater emphasis on exploring the open world and catching Pokémon seamlessly — familiar series staples like Trainers and the League don't exist yet.

Our first look at the game bears a strong resemblance to The Legend of Zelda: Breath of the Wild, but it's unclear at this early stage if that comparison will bear out. Pokémon Legends: Arceus can certainly learn a lot from that game's masterful handling of exploration and traversal. At the same time, we hope that Arceus will take a page from Hideo Kojima's divisive but groundbreaking open-world game Death Stranding. The Social Strand System was a refreshing new take on multiplayer that could really enhance an open-world Pokémon experience.

Death Stranding includes asynchronous online features that allow players to leave items within the game's world for others to use. For example, you could lay a ladder across a large gap for someone else to use later. Those players could then leave a like, akin to those on social media posts, showing their appreciation for your help. This aspect of the game made this single-player experience feel much bigger.

Kojima explained the reasoning for this mechanic in an interview with BBC. It makes players realize that "people like them exist all over the world," and in turn makes them feel less lonely. "Knowing that even though I'm lonely, there are other people like me makes them feel at ease."

"You'll start thinking about others when you play and how you might be able to help them," he added.

Since Pokémon Legends: Arceus will likely emphasize traversal, a system like this would be a fresh new direction for the series, connecting players as they explore an ancient version of Sinnoh for the first time.

The Pokémon series has always been about connecting with others, whether through battling or trading. Something akin to this innovative mechanic feels like the natural next step. Game Freak can also make it feel more distinctly Pokémon by letting players leave Pokéballs, TM or HM moves, or tools for other players.

This addition could give multiplayer more weight than just seeing other people travel around a Wild Area in Pokémon Sword and Shield. Promoting its community like this would be a great way to celebrate the franchise's community towards the tail end of the series' 25th anniversary.

At this time, Game Freak has not revealed any multiplayer features for Pokémon Legends: Arceus. Rumors circulated claiming the game will be single-player only after a Japanese listing seemed to indicate as much. Even though there's currently no indication from Game Freak that any features like this will make it into Pokémon Legends: Arceus, they'd still be a surprisingly good fit for that game or a possible sequel.

The Pokémon franchise has always been about connecting players, so they should learn from another game with that idea at its core. Exploring an ancient Sinnoh doesn't need to be so lonely.

Pokémon Legends: Arceus will be released for Nintendo Switch in 2022.