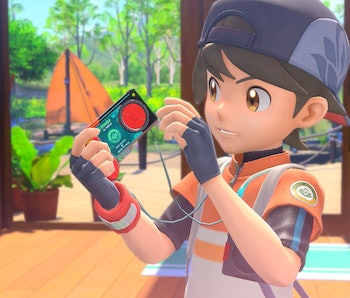 Pokémon Legends: Arceus will take the Pokémon series in an ambitious new direction.

The short reveal trailer from February 2021 made it clear that the game will be one of the most ambitious Pokémon games in years, featuring an open world and more active Pokémon catching process than ever before. As Pokémon Legends: Arceus is trying a lot of new things, Game Freak should look to the Pokémon Snap spin-off games for inspiration.

By adopting New Pokémon Snap’s photo and interaction mechanics, Pokémon Legends: Arceus could add a whole new layer of depth to mainline Pokémon games — and it could finally evolve the series after a quarter-century repeating the same formula.

Pokémon Legends: Arceus is set in ancient times, so it wouldn’t be surprising if it is canonically the first time many of Sinnoh’s Pokémon are discovered. The game’s website even teases that players will “catch, survey, and research wild Pokémon in a long-gone era of the Sinnoh region to create and complete the region’s first Pokédex.”

Still, we have yet to see how deep that surveying and researching mechanics go. Those tasks are basically the entirety of New Pokémon Snap, which sees players taking pictures of a variety of Pokémon, even interacting with them by throwing Fluffruit or playing melodies to get the best pictures.

We want to see Pokémon Legends: Arceus incorporate a similar system. We’ve already seen that you can sneak around and throw PokéBalls at Pokémon, so it’s not much of a stretch to hope you can throw other things as well. Pokémon Legends: Arceus could have its own variation of fluffruit and melodies, allowing you to attract certain Pokémon, which roam throughout the world.

From there, you capture them. Still, it’d be exciting if the game also allowed players to somehow take a picture of them as this happens as part of the surveying portion of the game. A game like New Pokémon Snap appeals to a crowd that might not like turn-based RPGs but enjoys the designs and world of Pokémon. Pokémon Legends: Arceus has the chance to do the same.

It would also have the benefit of not being on rails like New Pokémon Snap. While this means environments and individual Pokémon models might have less detail, it also means that there could be much more variety in how players can approach, take pictures of, and interact with Pokémon.

Mainline Pokémon games have even tinkered with Pokémon Snap-like mechanics before. In Pokémon Sun and Moon for the 3DS, players could use the Poké Finder to take pictures of Pokémon in certain spots around Alola. These images are then shared and liked in an in-game social media-like service.

Even though this feature was somewhat inconsequential in Sun and Moon, a reworked version of it for Pokémon Legends: Arceus has the opportunity to expand upon what New Pokémon Snap does. Maybe you could take pictures and hang them in town for NPCs to like, or share them online with friends if the game does decide to include multiplayer elements.

The Pokémon Snap games work so well because they give players a new way to interact with the world of Pokémon. Increasing immersion already seems to be one of Pokémon Legends: Arceus’ main goals, so it’d make a lot of sense to adopt what works in New Pokémon Snap, which has been received warmly by fans.

Pokémon Legends: Arceus will be released in early 2022.