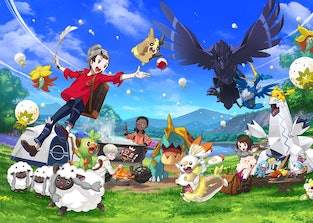 There ain’t no party like a Pokémon party. This year, the franchise celebrates its 25th anniversary, and fans have some big expectations. We already know that New Pokémon Snap is coming in April as part of the festivities. But based on last year’s Mario blowout, we expect that Nintendo has much more prepared for 2021.

A recent leak claims that a proper Nintendo Direct focused entirely on the Pokémon anniversary is coming next month, which is sending speculation into overdrive. Realistically, there’s a lot we can expect just from previously announced games alone. There are tons of random Pokémon projects floating around in the ether waiting for a release date.

More exciting, there’s the possibility of unannounced games that could make fans very happy. Here are five games we’re expecting to see at the next Pokémon Direct.

Back in 2019, Nintendo quietly confirmed that a sequel to the Nintendo 3DS Detective Pikachu game was in development. Since then, nothing has been announced about the deduction game. Considering how popular the Detective Pikachu movie was, it’s hard to imagine that the project has been scrapped, making it likely to pop up soon.

There’s also a good chance that it could be the kind of game that gets a surprising release date. Over the past year, Nintendo has tweaked its game announcement strategy. Rather than revealing games years in advance, it now tends to lift the lid on a new game once it's a few months away from release. We saw that with Paper Mario: The Origami King and Hyrule Warriors: Age of Calamity, so it’s possible that we see the same strategy with Detective Pikachu 2 whenever it's finally shown.

Pokémon Sleep is definitely the most bizarre and intriguing Pokémon project out there. First revealed in 2019, fans were extremely puzzled by the vague sleep-tracking app. No new details have come since then, but the 25th anniversary seems like a perfect time to tell fans what the hell is actually going on here.

What we do know is that Pokémon Sleep will be an Android/iOS app that tracks how much players sleep through the Poké Ball Plus accessory. That data gets transmitted to their phone via Bluetooth and is used for … something. There’s no information about the actual gameplay portion, but the prediction is that it’ll be something akin to Pokémon Go. Perhaps players will wake up from a restful slumber to discover they have caught dozens of Wooper.

Out of everything on this list, Pokémon Unite is the biggest lock for the next Pokémon Direct. First revealed last summer, the game is a Pokémon-themed MOBA that focuses on team multiplayer battles. The project is spearheaded by Tencent and will release on Nintendo Switch as well as mobile devices.

While no details have come out about the game since then, leaks are starting to bubble up. Centro Pokémon, considered a reliable source for Pokémon leaks by some, recently dug up some cosmetic outfits for the game. With news like that starting to come out, it wouldn’t be surprising if a release is imminent. Considering that the game received a full gameplay demo when it was first revealed, we imagine it could be closer to completion than we think. This could very well be the Pokémon Direct’s “available now” moment.

With the expected games out of the way, let’s get into some possible surprises. Back in 2019, Nintendo released Pokémon Let’s Go Pikachu and Eevee, which seemed to be part of a new remake cycle for the franchise. The game was a reworked version of Pokémon Red and Blue that adopted Pokémon Go’s simplified catching mechanic. While it seemed like a one-off release, it’s hard to imagine Nintendo passing on a sequel.

A Pokémon Let’s Go game based on Pokémon Gold and Silver seems like a no-brainer. Nintendo could take the exact same setup as the first game and swap Kanto for Johto, serving as a gen two remake. We haven’t returned to Johto since Pokémon Soul Silver and Heart Gold in 2009, so it seems like the perfect time to revisit that classic.

Fans have been begging for a Pokémon Diamond and Pearl remake for years, but it finally feels plausible in 2021. Not counting Pokémon Let’s Go, the last proper mainline remake came in 2014 with Pokémon Omega Ruby and Alpha Sapphire. At the time, it didn’t make much sense to remake Nintendo DS games on the slightly more powerful Nintendo 3DS. Now that we’ve moved on to the Nintendo Switch, a remake feels much more likely.

Centro Pokémon reports that the remakes are definitely happening and coming out this year. That could be a proper leak or just an educated guess. In reality, it just makes sense that Sinnoh remakes would hit this year. Nintendo generally drops one big Pokemon game a year, alternating between mainline games, spinoffs, and remakes. With 2020 focusing on Pokémon Sword and Shield DLC, we’re overdue for a new adventure. It’s not a lock, but it would be surprising if it didn't happen this year.