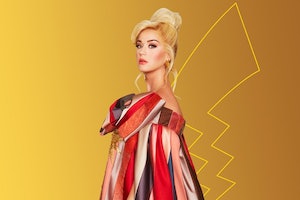 Katy Perry is a renaissance woman. She can do it all from creating hit pop songs to presenting clues on Jeopardy! and voicing Smurfette in two Smurf films. Showcasing her abilities even further, Katy Perry has joined forces with The Pokémon Company for the titular franchise's 25th anniversary as a premier collaborator on P25 Music. She's expected to produce a song specifically about Pokémon as part of the campaign, which aims to "make 2021 the biggest Pokémon party in history."

To some, this might seem like a weird choice. What could Katy Perry bring to the Pokémon franchise? Much like Henry Cavill, Katy Perry has been involved with video games for years; She just hasn't made a big deal about it.

Katy Perry is the perfect Pokémon mascot for 3 reasons.

When you stop to ponder gamer representation in mainstream music, your mind likely wanders to obvious ones like "Video Games" by Lana Del Ray or the similarly titled song "Video Game" by Sufjan Stevens. Sure, both bops obviously focus on video games to an extent, speaking generally about them as a stand-in for different emotional dynamics. It's all fairly nondescript, however. What games do Lana and Sufjan actually play?

Since 2008, the artist's music has been featured in three separate video game franchises, and Perry's upcoming Pokémon earworm will be her fourth.

Sims 2 (2008) was the first game to feature Perry. She appeared as herself and sang her hit song, "Hot 'N Cold" in Simlish, the Sims native tongue. Her vocal relationship with the fictional humans didn't stop there. In 2012, she followed this up with another Simlish rendition, her popular banger, "Last Friday Night."

The Sims was only the beginning of Perry's life as a musical gamer. She later penned Immortal Flame for the mobile game Final Fantasy Brave Exvius. In summer 2020, Perry released a music video called "Smile" about falling in love with gaming. In addition to the video, Perry teamed up with Alienware to launch a browser-based game of the same name.

We can only assume the song was an afterthought as Perry stayed up late nights developing "Smile."

2. Katy Perry herself has appeared in video games

Katy Perry is a gaming icon who has appeared in numerous video games. Perry appeared in both Sims 2 and Sims 3 to sing Simlish versions of her tunes. Sims 3 featured multiple DLCs focusing on the singer like the "Katy Perry's Sweet Treats" stuff pack and the Showtime expansion, which had a Katy Perry Collector's edition.

If that's not gamer enough, Perry was immortalized as a playable Final Fantasy character in Final Fantasy Brave Exvius, making her officially eligible for inclusion in a Kingdom Hearts game one day.

She's also released two games: The previously mentioned Smile and Katy Perry Pop. In the latter game, you make your own would-be popstar who becomes a pop-protogé to Perry.

1. Katy Perry has been called a Pokémon

In a bizarre press release for the upcoming Pokémon promotion, Colin Palmer, the Vice President of Pokémon Marketing said, “In Katy Perry, we see a kindred spirit to Pokémon," basically calling Perry a Pokémon. Which Pokémon exactly is unclear, but Palmer likely sees Ken Sugimori's image in Perry.

You won't find a better Nintendo seal of approval than that Perry to represent the series on this joyous anniversary.