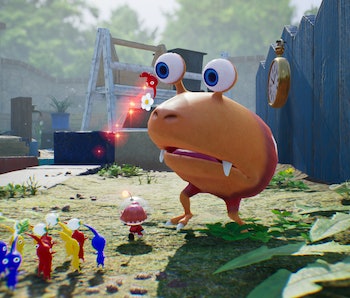 After nearly a decade, Pikmin is back with an all-new mainline installment, titled Pikmin 4. Nintendo revealed the new entry during the September 2022 Direct, which featured an appearance from series creator Shigeru Miyamoto. The Pikmin 4 announcement didn’t give us a ton of information, but it did come with a nifty little teaser trailer and even a release window. But what can we expect from the forthcoming sequel and when can we play it? Here’s what you need to know about Pikmin 4.

When is the Pikmin 4 release window?

Nintendo announced that Pikmin 4 will launch sometime in 2023 at an unspecified date. It’s unclear how far along in development the project is, but given how stacked the first part of 2023 is, Nintendo might want to hold it for the back half of the year.

One interesting detail has to do with this game’s lengthy development cycle. In 2015, series creator Shigeru Miyamoto told Eurogamer that work on Pikmin 4 was nearly finished.

“It's actually very close to completion," Miyamoto said. "Pikmin teams are always working on the next one.”

However, in 2019, Nintendo insider Emily Rogers said the development of Pikmin 4 had restarted, which would explain the long wait between entries. Pikmin 3 launched for the Wii U in 2013 but came to Nintendo Switch as an enhanced port in 2020.

Is there a Pikmin 4 trailer?

There’s a teaser trailer, yes! It doesn’t quite give us any major details, but it does show off some of the new game’s art. Given the long wait for this sequel, we’ll take any footage we can get.

What are the Pikmin 4 features?

There’s still a lot we don’t know about Pikmin 4, but one thing Nintendo did confirm is that you’ll be able to play it from the perspective of the Pikmin themselves.

During the Nintendo Direct, Miyamoto explained how the Switch will make it much easier to control and command the Pikmin in the forthcoming sequel. In previous entries, it was sometimes difficult to select a specific Pikmin and command them to certain locations, all while racing against the clock.

Pikmin 3 allowed players to easily keep track of all units with the use of the Wii U Gamepad, but since the Switch only has one screen, it’ll be interesting to see how Pikmin 4 will function.

It’s a safe bet Pikmin 4 will still prioritize real-time strategy and puzzle elements — likely with an emphasis on time, just like past installments.

What are the Pikmin 4 platforms?

Pikmin 4 is confirmed for Nintendo Switch. Since it’s a first-party Nintendo game, you shouldn’t expect it to come to PlayStation, Xbox, or PC.

It’s possible it will come to whatever Nintendo’s next console is — similar to the way Pikmin 3 launched for Wii U and then Switch. But at this time, Pikmin 4 is only confirmed for Nintendo Switch.