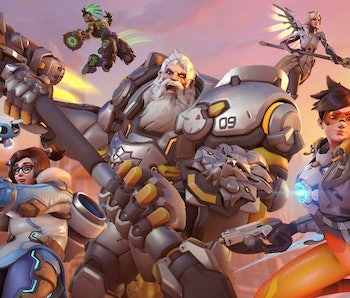 The beloved Jeff Kaplan may no longer be leading development on Overwatch 2, but the show — or in this case, the beloved team-based hero shooter — must go on.

Overwatch’s 2021 anniversary event just launched on May 18, but developer Blizzard Entertainment is also celebrating the occasion with a major update on the game’s upcoming sequel in the form of an “Overwatch 2 PvP livestream.” But what exactly will the event entail? And how can Overwatch fans tune in? Here’s all that and more.

When is the Overwatch 2 PvP livestream date and time?

Blizzard announced on May 11, 2021 that the upcoming PvP livestream would be broadcast on Thursday, May 20 at 3 p.m. Eastern. Overwatch was originally released on May 24, 2016 which makes this particular date just shy of the game’s five-year anniversary. Official materials say the event will run for two hours, wrapping up right around 5 p.m. Eastern.

How to watch the Overwatch 2 PvP livestream

Blizzard is offering two options for folks to tune into the livestream:

A direct link has yet to be revealed, but the presentation will be livestreamed on the official Twitch and YouTube Overwatch channels.

What to expect from the Overwatch 2 PvP livestream

Here’s a note from the new Game Director Aaron Keller.

With the initial announcement of the livestream, new Game Director Aaron Keller offered a preview of what to expect in the above Developer Update subtitled “What’s Next.” The main focus will be on new maps and other “major gameplay updates.”

“PvP is at the core of what makes Overwatch feel so special,” Keller says in the video, “so on May 20, the Overwatch and Overwatch League teams will be putting together a livestream where we’ll talk more about the PvP side of the game. I’ll be joined by Geoff Goodman, Dion Rogers, and others from the development team as we play through new maps and talk about some of the philosophy behind changes coming to Overwatch 2’s PvP.” Goodman is the Lead Hero Designer, and Rogers is an Associate Art Director.

Blizzard has also revealed the event will be hosted by Matt “Mr. X” Morello and Mitch “Uber” Leslie, two regular commentators for the Overwatch League. Overwatch content-creators Stylosa and Cuppcaake will also be involved as feature “guest appearances.”

Everything being shown is “still in development” and a “work in progress.” Several days later, there will be an AMA on the Overwatch subreddit on May 24 where the team will talk about the past five years.

When is the Overwatch 2 release date?

As tempting as it might be to hope for a release date announcement during the event, it doesn’t seem likely — though we might receive some kind of release window. At the very least, we’ll get a much deeper look at the state of the game, and based on that, plenty of predictions will emerge.

During a February 2021 Activision-Blizzard earnings call, CFO Dennis Durkin said that neither Overwatch 2 nor Diablo 4 is expected to launch in 2021. Though it did pass a “significant milestone” in December 2020 that involved “hundreds” of developers, so it may be well into the final stages of development. Most expectations place the game’s release sometime in 2022. The best guesses out there place it in the summer or fall, but we really don’t know.

More like this
Gaming
Jan. 24, 2023
Fortnite is about to get a Wild Dreams concert from The Kid LAROI
By Jess Reyes
Gaming
Jan. 24, 2023
Everything you need to know about Honkai: Star Rail's upcoming final beta
By Jess Reyes
Gaming
14 hours ago
Modern Warfare 2 Season 2 Release Date, Ashika Island, and Warzone 2.0 Updates
By Joseph Yaden
LEARN SOMETHING NEW EVERY DAY.
Related Tags
Share: