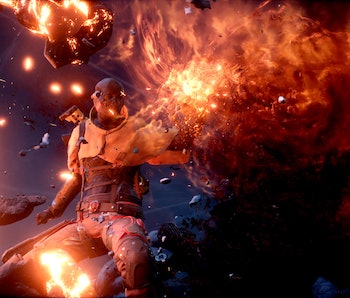 Spring is starting off with a bang. After a slow first three months, gaming finally kicked into high gear. We’ve already gotten big releases like Monster Hunter Rise and It Takes Two, but April 1 brings us a particularly action-packed shooter: Outriders.

The third-person shooter from developer People Can Fly is just days away and fans are already pre-loading their copy. Unfortunately, some are running into a bit of a hiccup. Several Reddit users have reported issues when trying to install the game on PS5. There seems to be an easy fix, so here’s what you need to know if you encounter the issue.

What is Outriders’ PS5 pre-install error?

According to multiple Reddit commenters, the issue is specifically affecting the PS5 version of the game. In one thread, a user reported that the PS5 version simply wouldn’t load at all. They could download the PS4 version onto the console, but not the actual PS5 edition. Judging by the consensus comments, that seems to be a common issue at the moment.

Another user experienced a more specific bug. They started pre-loading the game, but noticed that the download tab didn’t state which version of the game was getting installed. After canceling the download and double-checking the version, they got the error code CE-107880-4 when trying to reinstall. In that case, the PS4 version could be installed, but the PS5 could not.

At the moment, there haven’t been widespread reports of the issue on Xbox. Granted, Outriders is coming to Game Pass, so it might just be that fewer people are attempting to pre-load it on the system. The issue seems to exclusively affect the PS5 at the moment.

Fortunately, there does seem to be an easy solution to the problem. All you have to do is head over to the PS Store and download Outriders directly from there.

According to those who have fixed the issue, it may take one or two tries to work. If it doesn’t start downloading after you queue it up, cancel the download and try again.

While that should fix the problem, there does still seem to be an issue. The issue is affecting the Hell’s Rangers content pack, which is a pre-order bonus for the game. While the game will properly install through the PS5 Store, the extra content is still running into issues.

People Can Fly has yet to acknowledge the issue, so we can only hope that it won’t be a problem when the game officially launches on Thursday, April 1. In the meantime, you can still try out the game’s demo for free. Any progress made in the demo will carry over to the full game.