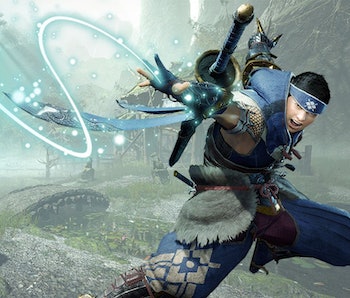 Capcom’s Monster Hunter Rise hit the Nintendo Switch on March 26, and the world full of action, adventure, and slaying monsters is already expanding at a rapid pace.

4 million copies were shipped in the first week and reviews are almost entirely positive, so for anyone wondering about what the future holds for Monster Hunter Rise, here’s a closer look at the 2021 roadmap — and what potentially lies beyond.

A launch day blog post written by community manager Yuri Araujo on Capcom’s website broke down several specifics, and the official Monster Hunter site has even more, including a visual roadmap of what to expect. So here’s everything you need to know about current and ongoing DLC, version 2.0, and version 3.0.

What does the Monster Hunter Rise roadmap look like?

Like most Monster Hunter games, Rise will include free ongoing updates. As of this writing, there are two confirmed updates in the works, but official materials do say “a number of free title updates” will be made available. So it’s possible that we could see a version 4.0 update or even something beyond that.

When is the Monster Hunter Rise Version 2.0 release date?

Previously, Capcom promised that the version 2.0 update would arrive in “late April,” and an April 27, 2021 digital event showcase confirmed that the free title update “Ver.2.0” would be released at 12 a.m. UTC on April 28.

For those of us in the United States, that shakes out to 8 p.m. Eastern on April 27.

What is the Monster Hunter Rise Version 2.0 download size?

Capcom has confirmed the Version 2.0 update will only be about 0.9 GB, but the required space will be 1.5 GB if this is your first time updating the game since purchase.

Capcom previously said the update will “feature the return of Chameleos, the debut of Apex Rathalos, and some additional monsters as well.” An April 27 post about the update also confirmed Teostra and Kushala Daora and some new Apex monsters, like Diablos . There’s also the ability to forge “layered armor” to change up the player’s appearances.

The lengthy Ver.2.0.0 patch notes confirm an increase in hunter rank cap “when certain conditions are met.” When that happens, new monsters will also begin intruding on some quests, including Village and Hub quests. They’ll also appear in the Rampage. Also included in the hunter rank cap increase are the following elements:

Additionally, the update includes a slew of bug fixes that can be read in the official patch notes.

Is there a Monster Hunter Rise Version 2.0 trailer?

Yes! As part of the April 27 livestream, Capcom released a trailer for the new update:

The trailer focuses entirely on the Elder Dragons and Apex Monsters featured in the new update, which include the following:

Capcom confirmed in the April 27 livestream that the version 3.0 update, due out at the “end of may” will also introduce several new monsters into the mix “as well as an additional ending to the Monster Hunter Rise story arc.”

There will be a two-way crossover between Rise and the upcoming Stories 2 game. Anyone who has save data for both games can unlock the default armor sets from the other game.

In other words, Rise players can wear cosmetics that look like the Stories 2 protagonist and vice versa.

Is there other Monster Hunter Rise DLC?

Anyone who purchased the Deluxe Edition of Monster Hunter Rise has access to a suite of DLC items. Those with the regular edition can still purchase the Deluxe Kit as paid DLC to get the same items. These include the following:

Additionally, there is a slew of other DLC items available for purchase on the Nintendo eShop. For the most part, these are purely cosmetic, but being able to transform your Palico into a nine-tailed white fox seems totally worth it.

Capcom does not that for most of these items, “you’ll need to make a certain amount of progress in the game, then talk to Senri the Mailman and select Add-on Content.”

Monster Hunter Rise is now available for the Nintendo Switch.

This article was originally published on April 3, 2021