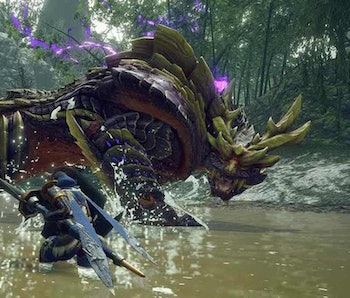 Monster Hunter Rise is an adventure. As Hunters, you’re always exploring the world, killing big bad monsters, and finding new items. You should collect everything in sight. If you don’t, you might miss out on a small item that becomes crucial down the line. For example, Bismuth Prisms are one such item. They seem minor at first but become crucial for completing the quest Economic Stimulation.

If you don’t have Bismuth Prisms on hand when the time comes, here’s where exactly can you find more for the quest.

What are Bismuth Prisms used for in Monster Hunter Rise?

Their second use is as a quest objective. The Economic Stimulation quest asks you to locate three Bismuth Prisms. If you have this quest unlocked, make sure to complete it immediately. Upon finishing this quest, you’ll be rewarded with an additional Submarine slot on the Argosy, allowing you to expedite the farming process even further.

Economic Stimulation will also request that you locate King Rhino and Rock Roses, which are far more scarce in the world. Locating a handful of Bismuth Prisms is a nice breezy way to start the missions.

Where can you farm Bismuth Prisms in Monster Hunter Rise?

If you need some Bismuth Prisms, you'll need to get yourself over to the Lava Caverns. While the fiery locale might seem like it’s only good for making your hunter sweat, it’s also the only place to farm Bismuth Crystals. To obtain them, you have to harvest Iridescent Ore. It’s a node that’s colorful and shaped like a cube. Each Iridescent Ore you find can provide either Bismuth Augite or a Bismuth Prism.

If you’re having difficulty locating them in Lava Caverns, try using this map for every Iridescent Ore location. Each spot where you can harvest the item is denoted with a purple question mark.

As you can see, one farming spot is right by your second Sub-Camp, making it easy to nab Bismuth Prisms in mere seconds. If you want to get more bang for your buck out of every trip, you can upgrade the Geologist skill to level two, allowing you to farm additional Bismuth Prisms from every Iridescent Ore.

Read Next: How to beat Magnamalo in Monster Hunter Rise

More like this
Gaming
5.10.2022 8:15 PM
Everything you need to know about Monster Hunter Rise: Sunbreak
By Jess Reyes
Gaming
5.11.2022 4:44 PM
Fortnite Sensor Backpack location and how to use it to find the Energy Fluctuation
By Joseph Yaden
Gaming
5.14.2022 4:00 PM
All 48 Genshin Impact birthdays, from January to December
By Jess Reyes
Related Tags
Share: