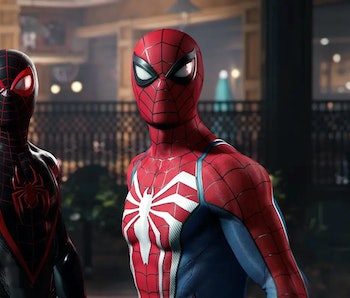 There's much to love about Marvel's Spider-Man, one of the greatest superhero video games ever made that was a highlight of the PlayStation 4’s lifecycle. Now that a follow-up has debuted with Spider-Man: Miles Morales, along with a PlayStation 5 remaster of the original, there’s no doubt that development on the next adventure has already begun.

Here's everything you need to know about Marvel's Spider-Man 2.

When will Marvel's Spider-Man 2 be released?

At the September 2021 PlayStation Showcase, Sony confirmed that Marvel’s Spider-Man 2 is slated for release sometime in 2023. That lines up with most previous expectations. It’s possible that it could happen rather early in the year, but that remains to be seen.

Is there a Marvel's Spider-Man 2 trailer?

Yes! During the September 2021 PlayStation Showcase, Sony released a teaser trailer for the game, included below:

In it, we catch glimpses of Peter and Miles fighting random enemies together, using various powers and gadgets to take them down in unique ways. After finishing up the battle with a tag-team attack, they hear a sound from a nearby alleyway.

During all of this, we hear a gruff voice doing the voice-over. He says the following:

Anyone who knows their Spider-Man lore will recognize Kraven the Hunter even though we never see him. Somewhat less surprising than Kraven showing up is who answers his question: From the alley, Venom says, “Yesssss...we will.” When Venom says “we,” is he talking about the Symbiote and its host? Or is he talking about himself and the two Spider-Men?

What are Marvel's Spider-Man 2 platforms?

In a PS Blog post published shortly after the September 2021 PlayStation Showcase, Sony confirmed that Marvel’s Spider-Man 2 would be “coming exclusively to PlayStation 5 consoles in 2023.” So there you have it: This one won’t appear on PlayStation 4 at all.

Who is the main character in Marvel's Spider-Man 2?

Spoilers for Marvel’s Spider-Man and Miles Morales ahead.

Based on information from Spider-Man: Miles Morales, it appears that Marvel's Spider-Man 2 will have dual protagonists of Peter and Miles. And the trailer all but confirms it. We see what’s essentially combat gameplay with each of them.

Spider-Man 2 might feature dual narratives, one for Peter and another for Miles. It could take an approach similar to Scarlet Nexus, where you play as one hero for an entire run of the game before experiencing something similar through the other perspective.

One new addition in Spider-Man: Miles Morales was two-person takedowns, which seemingly appear in the sequel’s trailer. For whatever sections that Miles and Peter work together, they should be able to pull off cool combo attacks.

Who are Marvel's Spider-Man 2’s villains?

Both previous games have featured several different villains, but the trailer makes it clear that Kraven the Hunter and Venom are the main two villains. The Venom Symbiote has almost certainly taken over Harry Osborn.

The first game also leaves Harry’s father, Norman Osborn, in a dark place: He’s resigned as mayor of New York, and he's growing increasingly desperate to find a cure for Harry’s terminal illness. It becomes increasingly clear that Norman is spiraling into madness. The vast amounts of wealth and lab technology he has access to allow him to pursue more extreme measures to help his son. When MJ sneaks into his lab, she discovers a prototype mask, blueprints for a hovercraft, and three purple grenades.

In the first game’s conclusion, Harry is in critical condition and a stasis chamber full of green liquid. A black, web-like substance is seen encasing his body. The black goo is extremely similar to the Symbiote fans have seen in the Spider-Man comics and films. In Miles Morales, Norman also finally releases Harry in the post-credits scene, so he’s probably the Venom we see.

Also, when we revisited the plot thread (plot web?) in Spider-Man: Miles Morales’ post-credits scene, Curt Connors was present. His brief appearance almost definitely sets him up for a larger role in the sequel. From the blood sample found in the first game, it seems that Connors has already transformed into the Lizard once; he’ll likely return to his supervillain persona.

Wilson Fisk also appeared in a lengthy side quest arc in Spider-Man: Miles Morales. In his appearance, Fisk and Miles came to verbal blows. The encounter concluded with Fisk promising, “Harlem hasn’t seen the last of me!” and other Scooby-Doo villain-esque statements. Fisk could become a personal foe for Miles in the sequel, assuming his promise can be trusted.

Marvel’s Spider-Man 2 will be released sometime in 2023.