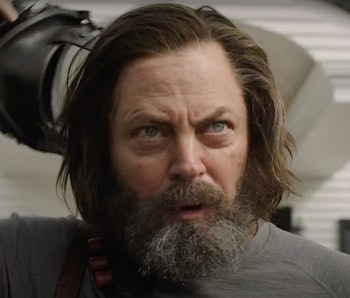 As part of a recent clip from HBO’s The Last of Us TV series, we’re reminded that Parks and Recreation alum Nick Offerman will portray the character Bill, one of the characters Joel and Ellie meet along their journey. Bill is one of the more interesting characters from the first game, where it’s heavily implied that he’s gay. Naughty Dog’s muddled subtext, however, feels grossly dated almost a decade after the game’s original release — especially when compared to the company’s more recent work. The TV show is the perfect opportunity to further explore Bill’s sexuality more explicity with all the nuance it deserves, and it can capitalize upon Offerman’s talents as an actor.

In the game, Bill makes several references to a “partner” named Frank, seemingly to hide his homosexuality. It’s ambiguous enough for many players to overlook. Naughty Dog essentially dances around the idea of Bill being gay without fully committing to it.

Are we meant to assume that Bill is trying to hide his sexuality, despite the fact that we are decades into the apocalypse when bigotry is probably — or at least hopefully — waning? When the game was released in 2013, the representation of gay characters in video games was underwhelming, to say the least. A lot of it was mere subtext.

Bill eventually discovers that his ex-partner, Frank, has died. He tries to play it off like he doesn’t care, and tries his best to act like a stereotypical “manly” badass. On some level, it feels somewhat realistic — but it also feels like a vaguely regressive half-measure.

The most egregious thing about this character’s portrayal is a specific moment in which Ellie finds one of Bill’s gay pornographic magazines. Ellie makes a joke to Joel about the pages of the magazine being stuck together and that’s the last major reference to Bill in the first game.

This joke feels especially dated when compared to the way Naughty Dog handled gay characters in the Left Behind DLC and The Last of Us Part II. Those two experiences feature believable gay characters with nuance that make them feel like human beings rather than stereotypes.

We’re optimistic about Bill’s portrayal in the upcoming HBO The Last of Us series, especially since his love interest, Frank, will seemingly have a more prominent role. In the show, Frank will be played by actor Murray Bartlett, who had a starring turn in White Lotus. So it seems like we’ll see a more fleshed-out version of Bill and Frank’s relationship.

Perhaps the show will include flashbacks to Bill and Frank, which would give them more of a believable story. Nick Offerman is a tremendously skilled and talented actor, so we have no doubts he’ll bring plenty to the table with his version of Bill.

Naughty Dog has proven that it knows how to handle gay characters in a tasteful manner, so we’re willing to give the studio the benefit of the doubt when it comes to Bill from The Last of Us. After the first game’s success, the studio became more direct, even devoting an entire DLC expansion to exploring the gay relationship between Ellie and her young love interest, Riley.

Since it doesn’t seem like Bill’s character has changed in The Last of Us Part 1 — a forthcoming remake of the first game — the next best option is to give Bill the story he deserves in the HBO series.

More like this
Gaming
Sep. 26, 2022
Last of Us HBO trailer hints the show won't ignore a key romance
By Jen Glennon
Entertainment
Sep. 26, 2022
Everything you need to know about HBO's The Last of Us TV series
By Corey Plante and Willa Rowe
Gaming
11 hours ago
Nier anime needs to embrace a broader Netflix game adaptation trend
By Willa Rowe
Related Tags
Share: