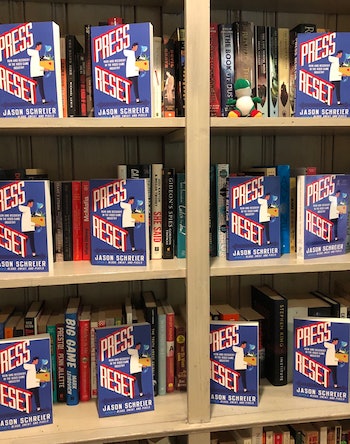 Making video games might sound like a dream job, but stories about crunch, mass layoffs, and studio closures can make it sound more like a nightmare.

“Even though the games industry is bigger than Hollywood in terms of revenue, making $180 billion a year, it is still a place where there are layoffs and studio shutdowns every few months,” journalist Jason Schreier tells Inverse. “All it takes is one bad business decision — or even the whim of a manager who sees you as numbers on a spreadsheet, and your studio is shut down and you lose your job.”

Stories like this are far more common than you might think. Schreier’s second book, Press Reset: Ruin and Recovery in the Video Game Industry, is an incisive investigation into the turbulent world of game-making.

“I didn't want to let the industry off the hook.”

Schreier interviewed dozens of developers about their work on games like BioShock Infinite, Epic Mickey, and Dead Space. We caught up with Schreier to talk more about his approach to Press Reset, the problems within the industry, and what it’s like when your speculation makes headlines.

What’s at the heart of the dysfunction within the industry?

That volatility has burnt so many people out because they can’t be uprooting their families and moving across the globe every time they face a layoff. If it was more possible to have a stable, sustainable career in games, then people would be able to deal with the other stuff.

I saw something circulating on Twitter about job listings, pointing out that there were thousands of senior and lead positions as opposed to junior. People who have senior-level experience after 10 years have left for other industries with better pay, more stability, and better career advancement.

Fundamentally, one of the issues is just capitalism, plain and simple: unregulated, wanton, late-stage capitalism.

What are some of the key differences between your first book and Press Reset?

One of the most common pieces of criticism I saw about Blood, Sweat, and Pixels was that it didn't go hard enough. It presented a lot of quotes from executives and high-level game developers about things like crunch in an unexamined way. I wanted to leave myself out of it and just tell these peoples’ stories.

I wanted to go a little bit harder and deeper and get into the injustices, the not-so-pleasant aspects of the video game industry to make it a lot clearer to readers where I stand. I still definitely wanted it to be other people's stories told in their own words.

I didn't want to let the industry off the hook. People have to read between the lines with my first book and judge for themselves how awful things are. I could have done a better job of making it clear that when these people talk about some of these things, it's not a healthy way of making games.

One of the interesting reactions I get from game developers about the book is that they like reading these bleak stories because it makes them feel like they’re not alone.

What are the biggest challenges of holding people within the industry accountable?

My approach is never to go hard to the point where I’m poking fun at or attacking people, to present the facts in as fair and as accurate a way that I can. This book spells things out, walking the reader through how these problems affect people, telling their stories, and presenting solutions.

I spent a lot of time in the first book talking about crunch. I believe I had Naughty Dog’s Neil Druckmann talking about how crunch is unavoidable when you're trying to make a Game of the Year. I had other quotes from people about how it damaged them. It’s impossible to read that and not see how bad it is. Finding other ways to make it clear that this is not the way it needs to be is what I present with Press Reset.

Ken Levine, Irrational Games, and BioShock loom large in this book. What can people like Levine do to be part of the solution instead of part of the problem?

People at Irrational talked about the pressure cooker they were in, and how harsh the environment was. One person in the book talked about how he left the industry and couldn’t stand being at Irrational because he was sick of being yelled at. There’s been a dearth of discussion about this issue in games, the “difficult auteur” question.

There is a difference between your standard creative conflict, and trying to resolve issues related to the big auteur. I don't want to use super loaded words here, but the environment that we've seen created at some of those places is something different.

It can be justified in your head when you're working at a game company that creative conflict, emotional tensions, or just not getting along are natural. But when do you cross the line and it becomes really unhealthy? I don’t know if it’s the place of the press to give that answer.

Press Reset is more about industry volatilities than difficult personalities. These are all really complicated things.

Press Reset presents an idea of contract-based game development rather than big studios doing everything in-house. Do you think this is a realistic solution?

Disbelief is one of the companies I look into, started by ex-Irrational folks. They have a really interesting structure and way of working to ensure that employees are treated well. One reason their business model works is that everybody always needs programming help. You have a task, and it either works or it doesn’t. That’s different from creative or artistic work where things might be more subjective.

Maybe this model can work with the squishy elements of game design as well. If you’re a gang of people who all do X thing really well, and you have a bunch of clients rather than one company, you could do good things. It’s a natural segue into unionization and organizing because if you’re in that group, you’re essentially a trade and guild of your own.

You made headlines recently remarking on the KOTOR remake. Do instances like this make your job easier or harder in any way?

It has its pros and cons. Having a platform as big as mine is a privilege, and I don’t want to seem like I’m naysaying that. A lot of reporters are not as lucky as I have been to do what I’ve done and have access to the kind of audience I’ve fortunately acquired. It’s certainly bizarre and sometimes annoying when people interpret everything you say or write in a bazillion different ways and read into everything thinking it’s a clue for some new game coming out. For me, it’s been more positive than negative.

Very excited. I want to see more of it already. The trailer so far looks awesome. I haven’t heard anything. I assume E3, but that’s just an assumption.

You made a lot of headlines last year when you reported on Grand Theft Auto 6 being in development. Did that fracture whatever relationship you have with Rockstar Games?

I don't really think it's any big secret that they're working on another GTA. I don’t know what their feelings towards me are, but it probably has more to do with the reporting I was doing a few years ago about crunch, and other reporting on Jeronimo Barrera and the frathouse culture they have over there.

Who knows what they’re thinking.

I like to make a lot of different things, so I’m constantly checking the New York Times cooking section. One of my favorite go-to's that I like to give people because it blows their mind is shallots, garlic, capers, anchovies, red pepper, and you sautee all that in some olive oil. Get it brown. Stick a bunch of boneless chicken thighs in that and let the fat render into a bit of sauce. Flip ‘em, add salt and butter, and then when you’re done you’ve got this delicious umami sauce.

A lot of people go, “UGH anchovies and capers, really?” My wife loves it so she wants me to make it all the time.

Was it you that once tweeted, “The secret to a good red sauce was to always add anchovies?” That’s totally true.

Yes! I see you are also a man of culture. I also highly recommend this cookbook called The Food Lab cookbook by J. Kenji López-Alt.

Do you have any ideas brewing for a third book you might write?

I have an idea for a third book that is really exciting. And I'm trying to line up some pieces and make it work. I haven't signed any paperwork yet or anything, so I can't really share much more than that until I'm sure it'll happen. I do want to do a third book but for now, people should go check out Press Reset.