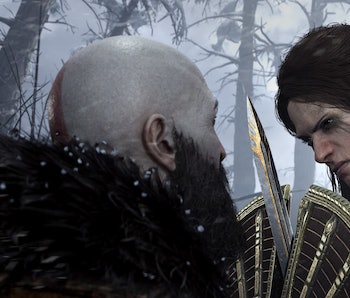 God of War Ragnarök is shaping up to be a worthy successor to the series' 2018 reinvention. Releasing on November 9th, 2022, Ragnarök will wrap up the Norse saga of Kratos and Atreus. The possibilities for how the story may end are countless, including time travel and even a return to Greece. In addition to Kratos’s already impressive arsenal of weapons including the Blades of Chaos and the Leviathan Axe, eagle-eyed fans have spotted clues in the special editions of the game that reveal a new mighty addition — Mjolnir.

Whosoever holds this hammer — Both the collector’s edition and the Jötnar edition of God of War Ragnarök come with a 16” replica of Mjolnir, which Sony says is a “highly detailed replica of Thor’s signature weapon” as seen in the game. Fans were quick to notice that these replicas feature several rune slots across the handle and face of the hammer. This suggests Mjolnir could be wielded by Kratos in Ragnarök.

In God of War, rune slots are available on weapons and armor to upgrade equipment as the game progresses. They are visually represented in-game by the golden crosses that also adorn the Mjolnir replica. The implication that Kratos will be using Mjolnir as his own weapon leads to plot theories about the traditional owner of the hammer, Thor.

Shall possess the power of Thor — The Norse god of thunder lives only in people's words during God of War, he is never seen. That is unless you experience the optional final cutscene of the game. If you lead Kratos back to his modest home and interact with the bed to make him sleep, you will be treated to a short cutscene that takes place “years” after the main story. Kratos and Atreus are awoken by thunder and lightning, their house shaking. Kratos opens the door to see a cloaked figure summon lightning around him, as the camera focuses on Mjolnir hanging at his hip.

Thor will most certainly be an antagonist during God of War Ragnarök. Kratos did in his favorite brother, Baldur. It’s still unclear when players will face off against Thor. While there is a possibility that he could appear several times over the course of the game to engage in battle with Kratos, the rune slots on Mjolnir suggest a much shorter lifespan for Thor.

If Mjolnir is indeed going to transfer ownership to Kratos, it implies that he did what he does best — slay gods. The ending cutscene of God of War sets up a confrontation between Kratos and Thor, which very well could be the opening scene of Ragnarök. Kratos absolutely wrecking shop on Thor, murdering him in the process, and taking his weapon to wield for the rest of the game would be a drastic way to set the tone of Ragnarök. Of course, it is also possible that Kratos takes away Mjolnir from Thor during their first encounter but leaves the god alive. Giving the two a reason to battle over the course of the game.

A new weapon may be exactly what Kratos needs to lead him through the nine realms on a journey of slaughtering gods and uncovering the mysteries left behind by Atreus’s mother.