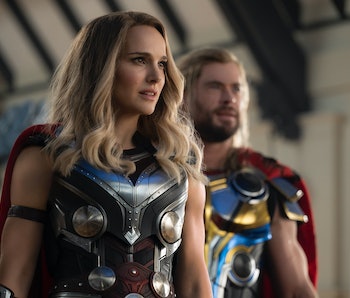 It may not be as weird or wild as some Marvel Cinematic Universe fans thought it would be, but that doesn’t mean Thor: Love and Thunder isn’t an ambitious film. In fact, the new outing from writer-director Taika Waititi not only brings dozens of new gods into the MCU, but it also sets up a major mythological conflict for a future Marvel movie to explore.

Hercules (Brett Goldstein) isn’t actually the most powerful character introduced in Love and Thunder, and neither is Zeus (Russell Crowe). Instead, that honor goes to Eternity, an obscure cosmic being from the comics that Thor: Love and Thunder has officially brought into the MCU.

Introducing Eternity — It’s revealed around the midpoint of Thor: Love and Thunder that Gorr the God Butcher’s (Christian Bale) mission involves discovering the secret location of the Gates of Eternity. Once he does, Gorr will be able to make the cosmic wish that’s reserved for whoever’s the first to reach the spirit of Eternity. His wish, as his name implies, will be for Eternity to destroy every god in the multiverse.

The revelation lays the groundwork for Love and Thunder’s climax, which sees Thor (Chris Hemsworth), Jane Foster (Natalie Portman), and Gorr duke it out at the Gates of Eternity. Gorr actually manages to make contact with Eternity’s spirit, but instead of using the opportunity to kill the MCU’s gods, Gorr requests that his daughter be brought back to life. The film then ends with Thor and Gorr’s daughter building a new life together.

Eternity essentially serves as the MacGuffin of Thor: Love and Thunder’s final half, but what some casual MCU fans may not realize is that Eternity is actually a Marvel Comics character, one who’s far more powerful than Love and Thunder lets on.

Eternity in the MCU — In the comics, Eternity essentially is the multiverse. He’s described as an “abstract entity,” which means he’s an amorphous being that exists outside of the physical limitations that most of the multiverse’s inhabitants must adhere to. He instead exists in a realm beyond space and time, he’s immortal, and he can manipulate matter, energy, magic, space, and time however he sees fit.

Every universe and living thing within the multiverse, therefore, is part of Eternity. In the comics, he’s worked with everyone from Doctor Strange to Galactus to ensure that reality remains intact. His enemies have included Thanos and Dormammu, both of whom have attempted to take Eternity’s place and reshape reality in their image.

Eternity is one of the most powerful beings ever introduced in Marvel Comics, although he’s only made whole by his sister, Infinity. The latter is depicted as a bronze statue in the Gates of Eternity in Thor: Love and Thunder, as are Death, Eon, The Watcher, and the Living Tribunal. Eternity’s authority in the multiverse is, notably, said to only be surpassed by that of the Living Tribunal’s.

The Inverse Analysis — When Gorr the God Butcher finally reaches the spirit of Eternity, the film shows him kneeling before a being that appears to be made of stars. That’s what Eternity looks like in the comics, which suggests that the entity’s form in the MCU is similar to the way he’s depicted on the page.

Whether that means a future MCU movie will show someone exit space and time and actually get to see the multiverse itself depicted the way Eternity is in the comics remains to be seen. Thor: Love and Thunder certainly raises the possibility of something like that happening in the future, though that’s assuming Eternity’s role hasn’t been changed for the MCU.

While Thor: Love and Thunder establishes that Eternity is a being capable of granting literally any wish, it doesn’t go so far as to confirm how powerful he actually is. The film, therefore, opens the door for the MCU’s version of Eternity to either be as powerful as he is in the comics or a bit less so. We’ll have to wait to find out more, but hopefully not for a ... well, you know.