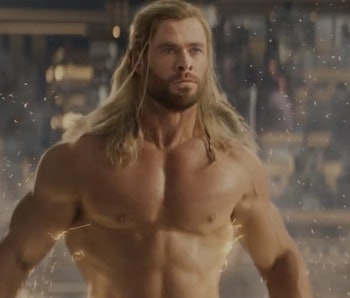 In the long wait for Thor: Love and Thunder, you’ve probably already rewatched the God of Thunder’s previous solo outing, Ragnarok, at least once or twice. And you’ve probably seen him help fight Thanos in the Avengers movies too. But there’s one movie crucial to understanding Thor 4 that you may have skipped entirely.

There are NO spoilers ahead for Thor: Love and Thunder!

The purpose of Marvel’s Thor comics has (among other things) been to turn as many deities as humanity worship into comic book characters. From the Greek gods to Middle Eastern Djinn, these supernatural beings found their way into the pages of Marvel history thanks to the adventures of Thor Odinson, the Norse god of thunder. Marvel’s movies haven’t done very much of this so far, but Love and Thunder is different.

Without giving anything specific away, there are a lot of gods in Thor 4. This shouldn’t come as a huge surprise considering the movie’s villain is named Gorr the God Butcher, but the biggest godly twist comes earlier when we encounter hundreds of them at once. There’s a lot to take in — and as far as I can tell, much of it is just jokes dreamt up by director Taika Waititi — but to understand one specific moment, you should really consider watching (or rewatching) Eternals.

Why Eternals matters for Thor 4

Again, I’m not going to get into specifics, just trust me when I saw that watching Eternals will help you understand some of the more cosmic things happening in Thor: Love and Thunder — and one moment in particular. The new movie also recontextualizes some of what we learned in Eternals, possibly paving the way for a sequel.

Eternals was also not the best-received Marvel movie when it came out. Despite an impressive cast and the sharp direction of Oscar-winner Chloe Zhao, the movie suffered from an overly complex plot that tried to introduce too many new characters at once. There’s a chance you skipped this one, so why not use this excuse to finally see it for yourself.

That said, if you saw Eternals when it came out, you probably don’t need to watch the movie before seeing Thor 4. This isn’t a super deep-cut reference. it’s pretty obvious and it also won’t really diminish your enjoyment of Love and Thunder if you don’t catch it at all. Still, there are some nice MCU connections happening here that you’ll appreciate more if you’ve seen Eternals.

Ok, but why should I see Eternals before Thor 4?

Stop asking questions and just go see Thor: Love and Thunder! Trust me when I tell you that the reason why will be obvious.

Thor: Love and Thunder flies into theaters on July 8.