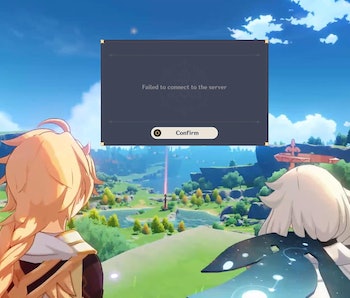 The anime-inspired open-world sensation Genshin Impact is always online, so you can't play it if there are any connectivity issues or any kind of server maintenance. If you're encountering that error the week of October 22, however, it may just be server maintenance.

On Tuesday, an official blog post from developer miHoYo confirmed that Genshin Impact would be undergoing a lengthy period of maintenance on October 22, 2020. But what is the maintenance for? And just how long will it last?

What time does the Genshin Impact server maintenance end?

The miHoYo blog post does note that precise times may vary and that players may "experience disruption outside of those period." If players have any measure of concern about losing game progress or having connectivity issues, it's probably best to wait until the early afternoon when things are clear.

There's a line in the blog post suggesting that players schedule their game time accordingly so as "to avoid losing your progress." Therefore, it's possible that if you're logged in and playing when the update begins, then it may cause problems with your data.

After the update is complete, PC players will be able to manually select "Update" from the game launcher and then restart the game to complete the update. On other platforms, a traditional game restart should initiate the download. The download may take quite some time if the update proves to be significant in size and scope.

What is the Genshin Impact server maintenance for?

While we don't specifically know what the update will fix, it may be related to known bugs and various server issues like the infamous Error Code 4206.

"To bring you the best-possible Genshin Impact experience and fix some known issues, the developers will soon perform version update maintenance, during which the servers will be down," the post reads. "While the update maintenance is in progress, Travelers will be unable to log in to the game."

It sure sounds like the update is related to server maintenance, considering it will revoke access to the game entirely for 4 hours or more. For what it's worth, this sort of maintenance is fairly common in live service games like Fortnite or Destiny 2. The way Genshin Impact's online functionality works is quite different from those games, but because it requires a constant online connection to the game's servers, it makes sense that maintenance would play out in a fairly similar way.

What is the Genshin Impact October maintenance reward?

A reward, you say? That's right. Developer miHoYo is offering "Compensation" to any players who are Adventure Rank 5 or above when the maintenance begins.

All players who meet the requirements will receive 60 Primogems for every hour of maintenance, so right now that's 240 Primogems. However, if the update runs longer, that number could increase.

Is this the Genshin Impact version 1.1 update?

While the October 22 maintenance seems significant in scope to some extent, it will not be the full version 1.11 update. Developer miHoYo has previously revealed that the 1.1 update is scheduled for November 11.

For a game where you accrue new party members through "Wishes," the fortuitous nature of adding the version 1.1 update on 11/11 seems deliberate. So it stands to reason that this October update is something entirely different. Still, it's likely that it'll lay some of the groundwork for future updates like the major one due for November.