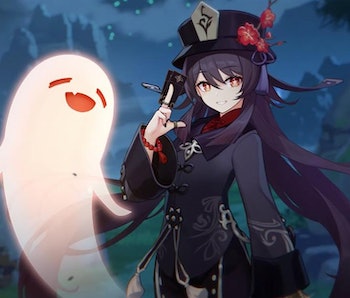 Hu Tao has come to haunt Genshin Impact. The Wangsheng Funeral Parlor director and Zhongli's boss is now a playable Five-star character in Genshin Impact. Alas, if you don't have the right artifacts and weapons, she might as well be a pile of useless money, showing how much you spent to obtain her. Conversely, she can become an essential DPS to your team with the right build.

Here's how to craft the perfect Hu Tao build in Genshin Impact.

To make the perfect Hu Tao build, you should focus on increasing her critical hit rate and upping her HP. Hu Tao's base damage is unfortunately rather weak — one of the weakest in Genshin Impact.

This weakness is easily overcome by utilizing Hu Tao's Elemental Skill, which increases her attack significantly and shrouds her strikes in Pyro damage. The damage this skill inflicts scales off Hu Tao's HP. The more you can raise Hu Tao's HP, the stronger her best attacks become. If you have the proper equipment Hu Tao can become a tour de force for your party.

To achieve her ultimate form, you'll need to give her three things:

With Genshin Impact version 1.3, miHoYo added the Staff of Homa, a new five-star weapon designed specifically for Hu Tao. The weapon has this effect: "Increases health by 20 percent. Additionally, provides an attack bonus based on 0.8 percent of the wielder's max health. When the wielder's health is less than 50%, this attack bonus is increased by an additional 1 percent of max health."

That's the perfect weapon for Hu Tao, but it's also a five-star polearm obtained through a gacha Banner. It's highly unlikely that you'll have enough money to pull both Hu Tao and the Staff of Homa.

Assuming you're not the tree that money grows on, the cheaper option is to get Hu Tao the three-star weapon, White Tassel. It's rather easy to find through chests and you'll obtain it randomly via the gacha. If you haven't touched your three-star weapons, you should have an abundance of White Tassels in your inventory.

The weapon has a high critical hit rate and greatly builds on Hu Tao's normal attack when refined. Although it doesn't have the powerful stats found on the Staff of Homa, the White Tassel's abilities are nothing to scoff at. It'll make a suitable weapon for Hu Tao while you try your luck in obtaining the Staff of Homa.

How to get Crimson Witch of Flames artifacts in Genshin Impact

If you want Hu Tao to become your go-to source for supporting Pyro elemental interactions, you need the Crimson Witch of Flames artifact set.

When decked out with two Crimson Witch of Flames artifacts, Pyro damage is increased by 15 percent.

If you bump that to four total Crimson Witch of Flames artifacts, status effects like Overloaded and Burning will have their damage increased by 40 percent. Other effects like Vaporize and Melt will be increased by 15 percent. Additionally, every time you activate an Elemental Skill, your Pyro damage will increase slightly. That can be stacked up to three times.

Crimson Witch of Flames artifacts can be found as a drop from the domain, Hidden Palace of Zhou Formula, located on Wuwang Hill in Liyue. You'll need to reach at least Adventure Rank 30 to challenge the domain.

How to get Xingqiu in Genshin Impact

To top off the proper build for Hu Tao, you're going to want Xingqiu on your team. Xingqiu adds a Wet effect to your attacks by utilizing their Elemental Skill and Elemental Burst. If you combine this with Hu Tao's Pyro attacks, this creates a Vaporize effect when you attack enemies, which further multiplies Hu Tao's damage by 1.5.

Switching to Xingqiu is essential if you want to deal the most damage as Hu Tao. Luckily, if you need the blue-haired Hydro character, Xingqiu is currently available on the Hu Tao banner with a vastly increased rate to acquire the character.

Read next: Use this Xingqiu build in Genshin Impact to make your team unstoppable