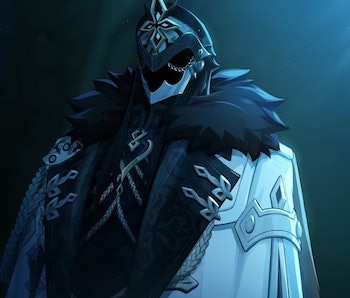 Il Capitano, a.k.a. The Captain or just Capitano, ranks fourth out of the Fatui Harbingers. His name has also been popping up more often since the reveal of all eleven Harbingers and Grand Master Varka’s most recent mention of him in Natlan, Land of Fire and Justice. Now that Scaramouche has become an ally, Genshin Impact players wonder who’s next to defect or join the ranks as a playable character. It’s not certain that Capitano will be as friendly as Childe or as hostile as Signora. Still, there’s enough information about him now to form theories about his place in the story.

Here’s what we know so far about The Captain, the fourth of the eleven Fatui Harbingers.

Is Capitano a playable character in Genshin Impact?

HoYoverse hasn’t announced Capitano as a playable character. It’s possible that he will become one, though, because his fellow Harbingers Childe and Scaramouche became playable characters after completing major roles in the Genshin Impact story. On the other hand, Signora didn’t, so who knows?

Many fans believe he will be playable based on the information revealed about him so far. However, the fact that his face hasn’t been revealed worries players because of how HoYoverse typically markets pretty faces for playable characters.

“I am 90% sure he will be playable. He is described positively by every character that mentions him,” one fan insists. “Victor who complains about Signora being terrible, says he wished he could work for Capitano instead. Childe also seems to respect him, and the only other Harbinger Childe has a high opinion of is Pulcinella who we know is as good as they get. Could easily see Capitano getting along with Traveler.”

Capitano is currently in Natlan, the country that the Traveler will reportedly visit after Fontaine. The Traveler hasn’t left Sumeru yet, so if Capitano becomes playable, it will likely be months in the future or even after 2023.

What is Capitano’s role in the Genshin Impact story?

Capitano doesn’t have much of a role in the story yet. However, as per leaks, he will play a major role in Natlan. Grand Master Varka confirms this much in his letter to the Knights of Favonius during the Ballad and Brews Event from Genshin Impact 3.1.

Grand Master Varka (via Mika, a Knights of Favonius recon agent) details his encounter with the Captain in his letter, saying that he was “not hostile” toward the Knights. Varka suspected this was because Mondstadt and Schneznaya were fighting the same enemy at this time. In this case, Capitano was fighting alongside them and even helped them.

“I don’t doubt that he could even take out a Ruin Guard by stabbing it in its big, glowing eye with one of Klee’s crayons,” reads Varka’s letter. However, he was grateful that Capitano was called to Natlan so that the Knights didn’t have to worry about him anymore.

What is Capitano’s relationship with the other Fatui Harbingers?

Capitano ranks fourth out of the eleven Fatui Harbingers, which means he’s just below their leader, Dottore, and Columbina. According to Childe, Harbingers are ranked based on strength, so it’s unclear why he’s ranked lower than Dottore and Columbina if he’s the “strongest human in Teyvat.”

The other Harbingers seem to hold him in high regard, including Childe. “I’ve seen him in battle before, and oh what a sight it was,” he says of The Captain. “Perhaps I’m ranked too low for him to notice me right now. Well, he may not recognize my strengths yet, but one day, I’ll show him what I’m made of.”

Capitano seems to have a serious, “by the books” personality, considering what he said about Signora at her funeral. He disapproved of how she carried out her duties but still showed respect for her at the service.

“Though her methods tarnished her honor, [Signora’s] sacrifice is a great pity. Her loss shall not hinder our progress,” he says before asking Dottore for an update on his progress with Scaramouche and the Electro Archon’s gnosis.

Unfortunately, he doesn’t speak much during his introduction in the “A Winter Night’s Lazzo” trailer, so we don’t know much about his character other than his diligence and battle prowess.

What are Capitano’s skills and abilities?

Despite his reputation for strength, not much has been disclosed about Capitano’s weapons or elements. It will likely be revealed at a date closer to his appearance in Natlan, considering fans didn’t even know Scaramouche’s abilities until they were leaked.

Is Capitano really the strongest human in Teyvat?