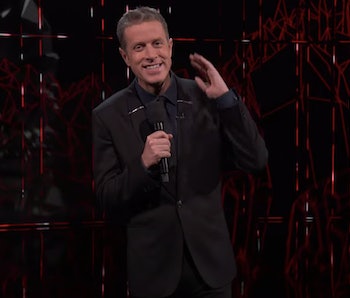 The Game Awards seem to be getting bigger every year. The December 10 ceremony hosted by Geoff Keighley aired on 45 different platforms globally. The official YouTube stream alone had over 415,000 concurrent viewers when Keighley announced the winner of the coveted Game of the Year award. Due to the Covid-19 pandemic, the ceremony looked and felt different than in previous years, but nevertheless strove for its usual grandeur, with an elaborate set, music from the London Philharmonic Orchestra, and an enviable cadre of celebrity appearances from the likes of Keanu Reeves, Tom Holland, Brie Larson, and Christopher Nolan.

Keighley is open about his lofty ambitions for the event. In an interview with Protocol last week, he said, "My high goal is to make The Game Awards the biggest award show in the world." He’s not content with becoming the Oscars of video games. He wants it to be bigger than the Oscars.

But The Game Awards don’t just try to mimic the drama and grandeur of the Oscars. The event also presents a homogenizing vision of video games that is largely cinematic.

When you look at those nominated and the winners, it skews towards big-budget, photorealistic games. The winner of this year’s Game of the Year award — the most important award in the video games industry — went to The Last of Us Part II. This same game swept the evening with six awards, despite heavy competition from the dungeon-crawling indie darling Hades.

The evening’s exclusive announcements shared a similar bend. We saw Vin Diesel’s likeness appear in Ark: Survival Evolved and some horror and zombie games. Although we were treated to trailers from a variety of more stylized and painterly video games, like Season or Open Roads, the cinematic elements of those games were emphasized over actual gameplay.

When introducing Open Roads, Keighley said: “One part road trip, one part mystery, with two familiar voices.” One of those voices was actor Keri Russell, of The Americans and The Rise of Skywalker. While Russell’s involvement is certainly noteworthy, why not focus more on the merits of the gameplay or storytelling instead of star power?

Throughout the night, celebrity appearances overshadowed game developers and their hard work. For some categories, like for “Best Action Game” and “Best Audio Design”, Keighley simply read off the winners in rapid-fire fashion like a class attendance sheet. Several awards were bundled into the pre-show presentation, for whatever reason deemed less relevant to the main three-hour broadcast.

I’m sympathetic to the fact that there were limitations given the pandemic, and not every developer could walk up on stage to receive their award. However, it did show us where Keighley’s priorities lie.

It’s all reminiscent of the games industry’s long-running inferiority complex compared to cinema. Bringing in A-list movie actors seems to stem from a desire to make games more credible as an art form. But that argument’s already been proven. At this point, it feels tired and forced. And to me, it felt like the 2020 Game Awards were trying too hard.

Take the free-to-play game Genshin Impact for example. Visually striking and boasting one of the best soundtracks of the year, Genshin grossed nearly $250 million in its first month, surpassing both Pokémon Go and PlayerUnknown’sBattlegrounds Mobile and cultivated a dedicated fan base within a month of release. Genshin walked away with two nominations and no awards. It did not receive a nomination for its fully orchestrated soundtrack.

Among Us left the show in slightly better shape. It won both its nominations in “Best Mobile Game” and “Best Multiplayer Game”, but somehow eluded nominations in Game of the Year and Best Ongoing Game, despite it being one of the most talked-about and streamed games of the year. Granted, Among Us originally released to little fanfare back in 2018, but Final Fantasy XIV was nominated for best RPG in 2019, even though the game had been out for nearly a decade at that point.

The show also pointedly turned away from an entire genre. For the first time this year, the event combined the award for simulator and strategy games into a “Best Sim/Strategy” category. Microsoft Flight Simulator won the category. It also happened to be the only sim. Leaving every other strategy game — including the critically acclaimed Crusader Kings III — on the list to go unrecognized.

Video game award shows shouldn’t be a popularity contest. But it is a real problem when the industry’s largest awards show sends a message that only certain types of games are worthy of recognition. The 2020 Game Awards tells developers that your game can’t be 2D. It can’t be cute. It can’t be on mobile devices, if you want it to win the top honor.

Perhaps back in the ‘90s and early 2000s, this vision of video games cowering in the shadow of the movie industry made more sense, but Mario and Final Fantasy are in their thirties now. It’s time to let games be games, and leave behind this outdated compulsion to make them like anything else.

More like this
Gaming
5.14.2022 2:00 PM
8 years ago, one remarkable indie changed war video games forever
By Mo Mozuch
Gaming
5.13.2022 11:00 AM
5 video games that changed time travel forever
By Jen Glennon
Gaming
17 hours ago
Salt and Sacrifice is a grotesquely gorgeous RPG held back by clunky design
By Joseph Yaden