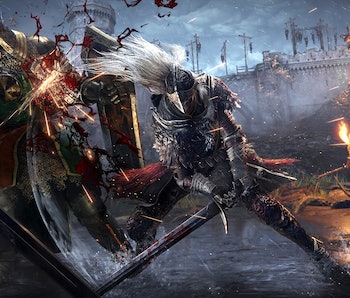 The most popular game of 2022 is being played by publishers themselves racing to snatch up developers like they’re collecting Pokémon. Microsoft acquired Activision Blizzard, Sony picked up Destiny developer Bungie, and even Zynga joined Take-Two. On August 31, two notable deals joined the growing list. Quantic Dream, the troubled developer led by David Cage, was acquired by NetEase. Sony and Tencent also both bought significant shares in FromSoftware, fresh off its biggest hit ever in Elden Ring. While that may eventually lead to more and more consolidation within the industry, this is a total win for FromSoft in the short term. Here’s why.

It’s important to first note that FromSoftware hasn’t been acquired outright. Sony and Tencent now own a little over 30 percent of the Dark Souls developer’s shares combined, leaving parent company Kadokawa Corporation with a nice 69.66 percent controlling stake. The recent movement toward consolidation in the game industry could be a disaster for smaller developers and publishers; Fortunately, this deal could actually help keep FromSoft from being swallowed up any time soon. Still, a move like this concerning one of the most influential developers in gaming this year raises plenty of questions.

Kadokawa’s own announcement of the deal answers the most pressing concerns.

Sony and Tencent acquired their shares under a “third-party allotment,” meaning Kadokawa specifically chose those two companies to sell shares to. In other words, it’s nothing even approaching a takeover or a way for Tencent or Sony to exert power over FromSoft. As for why the deal was brokered, Kadokawa says it will help FromSoft “proactively invest in development of more powerful game IP” and “establish a framework that allows the expansion of the scope of its own publishing.”

These are both points of particular interest to FromSoft, and they’re tied together. The developer already publishes its own titles in Japan, but elsewhere in the world, it relies on other publishers. Demon’s Souls was published in the U.S. by Atlus, the Dark Souls series and Elden Ring by Bandai Namco, Bloodborne by Sony, and Sekiro by Activision.

That puts control of the IP for FromSoft’s games in the hands of publishers who can make decisions about the future of those games. After Elden Ring’s chart-topping release in March, Bandai Namco made that point clearly, with president Yasuo Miyakawa saying, “We will continue our efforts in expanding the brand beyond the game itself, and into everyone’s daily life.”

I certainly don’t want my daily life to resemble Elden Ring in any way, and it seems FromSoft has issues with the arrangement as well. If the money from its recent deal does allow FromSoft to publish its own games globally, that means IP stays in the developer’s hands, giving it control over any potential sequels, remakes, and adaptations. It also means more money from sales stays in FromSoft’s pocket to fund future games.

As for what Sony and Tencent get out of the deal, the answer is simpler. Elden Ring outsold even the wildest expectations, and the new shareholders want to get their hands on some of the cash FromSoft seems poised to continue raking in. It also signals a closer relationship between FromSoft and Sony, which could mean future publishing deals and other support. The cozier relationship could help make projects fans are clamoring for more likely, like the eternally rumored Bloodborne remake or sequel, but it by no means guarantees them.

What it doesn’t mean is that Sony is getting closer to a full acquisition. That’s certainly not impossible, but it’s no more likely today than it was yesterday. FromSoft’s parent company Kadokawa Corporation is no joke, with dozens of publishers across books, TV, movies, and games under its umbrella. Sony is a vastly larger company, but there’s just no good reason for Kadokawa to sell FromSoft (especially after Elden Ring), so Sony would likely have to buy the whole company.

Sony’s most high-profile recent acquisition was Bungie, in a move the company said was meant to strengthen its live-service capabilities. Unless FromSoft has a secret live-service game in the works, which would be a massive change for a developer that specializes in mostly single-player games, it doesn’t seem to fit Sony’s vision. Tencent could make a move to increase its presence in Japan as well, but it has no existing relationship with FromSoftware, so that seems even more far-fetched.

So for now, it’s likely the biggest effect the deal will have is on the bank accounts of the companies involved, not their output. That’s certainly not going to sway any of the people who read Bloodborne server maintenance as a sign a sequel is on the way, and frankly, I salute their dedication.