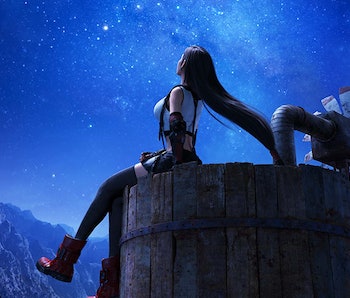 Square Enix’s Final Fantasy VII Remake remains one of the very best Sony-exclusive games to land on PlayStation 4 towards the end of the console’s lifecycle. And while the remake of the beloved JRPG remains exclusive to Sony consoles for the foreseeable future, there’s reason to believe that might not be the case forever.

Square Enix hasn’t made any details available just yet, but here’s what we know whether or not FF7 Remake might arrive on Xbox, Switch, or PC in the future.

FF7 Remake is a “timed exclusive” for Sony consoles for one year following its April 10, 2020 release date, which means that as of April 10, 2021, it becomes at least possible for the game to migrate over to other platforms. We learned this back in December 2019, when an eagle-eyed fan of the franchise on Twitter spotted the fine print on the box art for the then-upcoming game. Gaming industry analyst @BenjiSales reminded his followers of this via Twitter on April 7, 2021.

PlayStation consoles remain the best place to play FF7 Remake for now, considering the release of FF7 Remake: Intergrade on the PlayStation 5 in June 2021. It included a next-gen upgrade for the base game along with brand-new story chapters featuring Yuffie Kisaragi.

Here’s a more in-depth look at the possibilities for each platform.

Square Enix has yet to announce plans to bring the game to Nintendo Switch. However, an enhanced port of the PS1 version of the game is already available for all your on-the-go and bedtime Final Fantasy needs. Sure, it’s not quite as spiffy as the new version, but you can speed through battles if you’re not down for that random encounters grind.

FF7 Remake is a rather large game, coming in close to 100 GB — far larger than the Nintendo Switch’s based storage space. Storage aside, the Switch doesn’t really have the hardware needed to run a game like this. Then again, they got The Witcher 3 and Skyrim to run on Switch, so it may indeed be possible. There’s also the possibility that Nintendo will invest more in cloud technology to bring a game like this to the platform. Assassin’s Creed Odyssey was previously brought to Switch as part of a partnership with Ubitus GameCloud, similar to what happened with Control in late 2020.

So it’s possible but not all that likely.

Yes! Final Fantasy VII remake officially released on PC on December 16, 2021. It is, to this date, the only non-Sony platform that the game is available on.

Will FF7 Remake come to Xbox One or Xbox Series X?

While Final Fantasy 7 Remake is available on PC, it’s still a no-show on other Microsoft platforms, despite rampant speculation it would show up on Xbox. Back in July 2019, the official Xbox Facebook account in Germany “accidentally” posted a message indicating the game would come to Xbox in March 2020.

Obviously, that didn’t end up coming to pass, but there’s good reason to hope that we’ll see Xbox One and Series X versions of the game out eventually. Back in February 2020, Xbox head Phil Spencer said one of the team’s goals with Series X is to make the console more appealing in Japan. Presumably, that means ensuring that marquee Japanese-made games come to the platform. If FF7 Remake is included, it doesn’t seem likely that Intergrade content would also make the leap.

This article was originally published on March 3, 2020