"an even greater calamity than ever before" 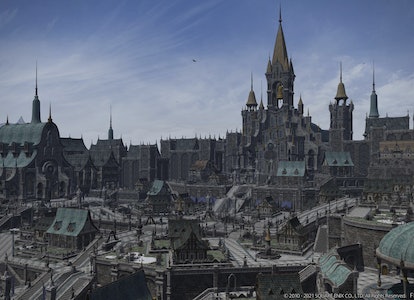 2020 was the best of times and the worst of times for Japanese video game developer Square Enix. The April release of the long-awaited Final Fantasy VII Remake met with overwhelming praise from diehard fans of the 1997 original and series newcomers alike. However, the company's ambitious ongoing game Marvel's Avengers was a pretty whopping flop, with bland postgame content sending players fleeing for the exits.

Square Enix has a whole lot of irons in the fire in 2021, from ambitious new IP like Outriders to new iterations of fan-favorite franchises like Kingdom Hearts, Final Fantasy, and Dragon Quest. Here's everything we can expect from Square Enix in 2021 and beyond.

FF7 Remake is a timed exclusive for Sony, but that arrangement will likely come to an end on April 10, one year after the game's initial release. While we know the team at Square Enix has been working on the next installment of the Remake series since July 2020, they have yet to reveal a release window or title for the continuation of Cloud's story.

Bear in mind, this an educated guess and not an official confirmation, but we expect to learn more about Xbox and PC ports of Remake in mid-April. (We're not optimistic about Switch just yet.) We expect port news to come before any announcements regarding the sequel to Final Fantasy VII Remake, which means we could see a tease at E3 2021 or later in the year.

We'd be very surprised indeed if FF7 Remake Part 2 launched this year, but we'd love to be proven wrong!

For the first time in the series' history, the Kingdom Hearts games are coming to PC, exclusively via the Epic Games Store. Kingdom Hearts 1 and 2 Remix editions, Kingdom Hearts 3, and Melody of Memory will be available at the end of March, and we can't wait for the mods and the memes.

Kingdom Hearts creator Tetsuya Nomura hasn't confirmed whether there will be a fourth mainline installment in the series, and at present he's likely to have much of his attention on the sequel to Final Fantasy VII Remake. However, he hasn't ruled out continuing the series down the line, telling Dengeki Online (via IGN), "I intend to tie up remaining loose story ends but also want to change the format a bit. I want to drastically change the world and tell a new story, but also tie up loose ends."

The Legend of Zelda isn't the only classic role-playing series that cruises into middle age this year. Prepare yourself for a deluge of smiling slimes this spring, as Dragon Quest marks the 35th anniversary of its 1986 launch. While production of Dragon Quest XII is currently underway, we don't expect to see the next installment in this epic RPG series as soon as this year.

That said, an official announcement ahead of a 2022 release isn't outside the realm of possibility. We also wouldn't be surprised at all to see a rerelease of some of the series' most iconic games to mark this auspicious occasion. Series creator Yuji Horii has promised "all sorts of announcements" for the anniversary, so watch this space.

It's no secret that Crystal Dynamics' attempt to merge Destiny 2-inspired gameplay with Earth's Mightiest Heroes didn't exactly go according to plan. Since launch, the development team has continued to release weekly War Table updates with new missions and quality-of-life improvements.

The second DLC, focused on Clint Barton's Hawkeye, will launch March 18. Clint will have combat skills somewhat reminiscent of the game's first DLC character, his protége Kate Bishop. That same date will see the launch of Marvel's Avengers' Series X and PS5 versions, which will be free to those who already own the game on a previous-gen platform.

This 3D platformer from Sonic the Hedgehog creator Yuji Naka has serious Nights into Dreams vibes, for those of you cool enough to appreciate the glory days of the Sega Saturn.

We went hands-on with the PS5 demo back in January, and while we were charmed by the visuals and environments, we found the gameplay a smidge too easy. That said, we're still eager to check out the full release once the end of March rolls around.

Outriders is a third-person shooter with some RPG elements that can be played either alone or in a group of up to three players. The developers have teased that weapons will get more fantastical over the course of the game, with special modifications that burn or even poison enemies.

Ahead of the game's release, a beta is planned for February 25 on PlayStation, Xbox, and PC.

After the success of 2017's NieR Automata, Square Enix decided to give the first game in the long underappreciated series a fresh coat of paint. The overhauled version of the 2010 game aims to be more accessible to newcomers, and will launch on PlayStation, Xbox, and PC. It will include upgraded visuals, an enhanced soundtrack, and re-recorded lines with the original voice actors.

NEO: The World Ends With You

This beloved urban fantasy series, drawn in the same style as Kingdom Hearts, will finally return to the spotlight with a sequel more than 10 years after the initial game's launch. You can check out the announcement trailer from Square Enix below.

The next update for Square Enix's long-running MMORPG will take a page from the final act of one of the foundational games in the series — Final Fantasy IV — by taking players on a fantastic journey to the moon.

Here's a hint at what players can expect from the story, according to an official release from the developer:

"Endwalker features the climax of the Hydaelyn and Zodiark story, in which Warriors of Light will encounter an even greater calamity than ever before as they travel to the far reaches of Hydaelyn and even to the moon."

The next-gen game some first assumed was the next mainline Final Fantasy game is actually a brand-new IP for the storied role-playing game developer. Project Athia takes some visual and stylistic cues from Final Fantasy XV, but adds a more supernatural element to the proceedings, with daunting, looming foes to battle that wouldn't look out of place in a Monster Hunter game.

At launch, Project Athia will be exclusive to PS5 and PC. According to a footnote from a PS5 sizzle reel, it will remain that way for two years after release, at which point Square Enix can release the game on other consoles. Sorry, Xbox fans.

One of the biggest surprises of Sony's September 2020 PS5 showcase was the reveal of the next mainline installment of Square Enix's best-known series: Final Fantasy XVI. It ticks all the boxes for fans and first timers: summoned monsters (here called Eikons), handsome princes, and even a little time-skip action.

A princely young boy named Joshua is a "Dominant," blessed with magical powers connected to the Eikon Phoenix. A PS Blog post confirms you'll play as same character at different points in time. That's not dissimilar from Final Fantasy XV, which allowed players to step into the impeccably tailored suits of Prince Noctis as a both young bachelor and a middle-aged monarch.

The game's director, Final Fantasy XIV mastermind Naoki Yoshida (aka Yoshi-P), deliberately chose to release a trailer that consisted mainly of in-game footage rather than cinematics.

In an interview for Tokyo Game Show 2020, he noted, "I saw some comments from Americans saying that if we [released a trailer that was all pre-rendered], they wouldn't see the game until 2035 … So we decided to release a proper trailer." (Translated by @aitaikimochi.)

While we don't expect Final Fantasy XVI to release this year, we would expect to hear a bit more about the game's progress, and possibly get a launch window before the year is out.

The mysterious upcoming game from Bayonetta and Nier: Automata studio Platinum Games is "continuing to progress well" according to the developer, but we haven't learned much more about it since it was first announced at Square Enix's E3 showcase in 2018. The trailer from Sony's December 2019 State of Play presentation suggests an intriguingly Soulslike vibe through its gloomy gothic settings and gut-gouging swordplay.

Given that the game has been in development for quite some time now, it's likely we'll get a new update at some point this year, even if the game doesn't release in 2021.

More like this
Gaming
6.23.2022 5:12 PM
Everything you need to know about Final Fantasy 16
By Corey Plante, Jen Glennon and Jess Reyes
Gaming
6.29.2022 11:30 AM
Everything you need to know about Dragon Quest Treasures
By Robin Bea
Gaming
19 hours ago
Hypercharge: Unboxed Xbox release window, gameplay, platforms, and trailer
By Joseph Yaden
Related Tags
Share: