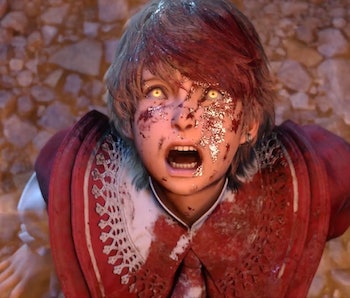 We barely know anything about Final Fantasy XVI’s story, but the gripping “Awakening” trailer from September 2020 is rife with mystery waiting to be unraveled. By most accounts, it seems like developer Square Enix will show off more of the game during E3 2021, and maybe even announce a release date. But what if the secret plot twist is already hiding in plain sight?

Is the mysterious Blight corrupting the land also creating Dark Eikons like Ifrit, plunging the world into chaos?

The first FF16 trailer showed off plenty of blood and violence, promising a mature tale of brotherly love and loss. The five Mothercrystals in the land of Valisthea produce aether, the fuel for magic. But they also produce Dominants, summoners who can wield the power of primordial magical beings called Eikons. These include Final Fantasy classics like Shiva, Titan, Phoenix, and Ifrit.

The trailer introduces us to Clive Rosfield, a warrior with a face tattoo who fights in a huge battle in an attempt to take down Shiva’s Dominant. But we also see Clive some years prior in the Grand Duchy of Rosaria where his younger brother, Joshua, is the Dominant of the fire Eikon Phoenix. Except after a Rosarian knight is butchered in front of him, Joshua summons the Phoenix. Ifrit, a demonic-looking Dark Eikon also appears. Based on somebody’s reaction in this scene, that’s not supposed to happen.

Now, the other key detail here that’s been overlooked by many thus far is this thing called the Blight. Square Enix’s official website for the game calls it “a threat that, left unchecked, would doubtless usher the realm to ruin” in a section about Rosaria. But another section notes that it threatens to destroy all of the dominions.

So there’s a creepy malevolent force that’s seemingly corrupting the world, threatening the very source of all magic? That sounds a bit like Stranger Things Season 2 where the Upside Down was tainting the local fauna. And what do you know, the FF16 trailer shows Clive fighting in a swampy area, even taking on the monstrous Malboro with its signature Bad Breath move that poisons its foes. Blights in high fantasy settings are always turning things into swamps. In this case, it’s probably affecting the Mothercrystals, aether, magic, Dominants, and most importantly, the Eikons.

Here’s our prediction for what goes down:

In the prologue, Clive is tasked with investigating emerging signs of the Blight in nearby wildlands, where he fights with some Phoenix powers from his younger brother. Upon his return, some kind of Dragoon (probably from the Kingdom of Waloed based on the lightning magic?) attacks. Presumably, it’s shortly after that when somebody betrays the Rosarian forces, attacks Joshua, and triggers the cataclysmic — and traumatic — event that sends Clive on a quest for revenge.

A PS Blog post notes that Clive is “swept up into a great tragedy” and also hints at that tragedy when you compare it to the trailer. “Joshua transforms into the Phoenix and fights to protect his nation,” the post also reads, making it pretty clear that Dominants do not summon Eikons. Dominants become Eikons. In the trailer, Ifrit mauls someone with blood spurting up while an onlooker screams, “Please, Joshua! Wake Up!”

Was Joshua/Phoenix knocked unconscious, and someone else is begging for their help? Or is this Clive pleading with Joshua to wake up and defend himself while he’s being murdered?

It’s possible, even likely, that the Blight is some magical force that is also giving rise to Dark Eikons like Ifrit, and the prologue ends with Ifrit destroying Joshua and the Phoenix ... permanently.

“The legacy of the crystals has shaped our history for long enough,” reads the logline for the whole game. That makes it seem like Clive’s quest is to destroy all of magic, perhaps by destroying the Mothercrystals. Does that mean he’s working for or against this Blight? That part remains uncertain, but it seems pretty clear that the Blight and Dark Eikons must be related in some fashion — and that Ifrit is just the beginning.

Now take another gander at the trailer and consider the possibilities: