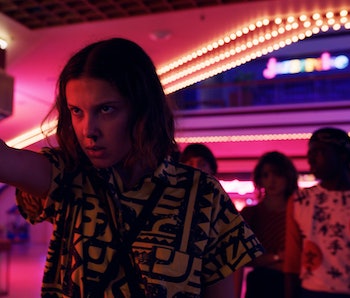 This article about Season 3 of the series Stranger Things was originally published on May 22, 2019 and updated on May 14, 2021 following the release of the season on Netflix. Read on for the original article, with some new changes to reflect the latest updates on this topic.

Everyone’s favorite Netflix sci-fi horror series returned for the summer. Stranger Things Season 3 brought us back to the fictional Hawkins, Indiana for a new terrifying adventure against the otherworldly forces of the Upside Down.

Here’s everything we know about Stranger Things Season 3, from new and returning cast members to whether the series will go to Season 4 and beyond.

When was the Stranger Things Season 3 release date?

A trailer released in December 2018 announced that Stranger Things Season 3 would be released on July 4, 2019. That date coincides with the summer setting of the season, including an outright celebration of Independence Day.

How did Stranger Things Season 2 set up Season 3?

Most of Season 2 involved battling the Shadow Monster (or Mind Flayer) in the Upside Down as it tried to corrupt and invade the real world. The interdimensional rift at Hawkins Lab grew bigger and bigger, allowing demodogs to move into Hawkins proper. The Shadow Monster even invaded Will’s body.

Ultimately, Hopper and Eleven were able to close the gate and save Hawkins. Still, her epic display of power might’ve attracted the attention of the Shadow Monster more than ever before. As part of a deal Hopper made with Dr. Owens, the Sheriff was also able to formally adopt Eleven as Jane Hopper, legitimizing her identity as more than just a government experiment.

The utterly charming final scene of Stranger Things 2 takes place at a school dance where Mike and Eleven shared a kiss while Lucas and Max also get together. But looming over them, just a half-dimension away in the Upside Down, was the Shadow Monster watching closely.

Was there a trailer for Stranger Things Season 3?

Yes! On March 20, Netflix released a full trailer for the new season. There are plenty of obvious ‘80s vibes, but it also sets the scene for one crucial summer as the Hawkins kids continue growing up. Not only does the trailer show off a horrifying new beast, but it also teases some kind of infection from the Upside Down that infecting people, all while a corrupt new mayor has a huge mall constructed in the town.

Also Read: ‘Stranger Things’ Season 3 Monster May Be Named After This D&D Beast

This new trailer came long after Netflix released a “commercial” for the Starcourt Mall in July 2018 that teased Starcourt Mall, a new setting for Season 3.

Because this is the summer of 1985, Steve has graduated from high school and now works in an ice cream shop at the Starcourt Mall food court, which explains his appearance in the mall commercial alongside a new character played by Maya Hawke.

What is the plot of Stranger Things Season 3?

Here’s the official synopsis from Netflix:

In mid-1985, when the box office was dominated by the presence of Back to the Future, Mike and Eleven have developed a romantic relationship, as have Max and Lucas. However, one year after the defeat of the Mind Flayer, things are not all that they seem in Hawkins. The town has a new leader, the morally corrupt Mayor Kline, whose administration supported and presided over the construction of the new Starcourt Mall. With the Fourth of July approaching, strange things start to happen: Lucas’ sister Erica discovers a mysterious new threat, and a lifeguard at the community pool suddenly disappears, triggering fear in those that still have the events from the previous year still fresh in their minds.

During PaleyFest in March 2018, Stranger Things executive producer Shawn Levy confirmed that Season 3 would take place a year after Season 2 during the summer of 1985. He also revealed that the romantic pairings of Eleven-Mike and Max-Lucas remained steady.

In Worlds Turned Upside Down, a companion book to the Stranger Things TV series, Levy also said, “We ended Season 2 with a clear signal that the Shadow Monster was not eliminated, and maybe he’s even identified his foe. And that darkness, and the battle that it requires, only grows in Season 3.”

Much like how Season 2 riffed on the release of the first Ghostbusters movie, Season 3 aimed for something closer to traditional horror in its focus on movies from directors like John Carpenter (Halloween, The Thing), David Cronenberg (The Fly, Videodrome), and George Romero (Night of the Living Dead).

What characters were new or returning in Stranger Things Season 3?

On May 19, Netflix released a ton of new, moody character posters for all of the returning Stranger Things characters that promise more than fun and fireworks this summer. Each of the characters looks older, wiser, and have gotten new mid-‘80s wardrobes for Season 3.

The Hollywood Reporter revealed that some newcomers include Maya Hawke as “a woman on a collision course with a dark secret in Hawkins.” Jake Busey played Bruce Lowe, “a Hawkins Post journalist with questionable morals,” and Cary Elwes “is playing Mayor Kline, described as a slick and sleazy politician.” Additionally, Season 2 guest stars Priah Ferguson (Erica Sinclair) and Brett Gelman (Murray Bauman) returned for Season 3 in a larger capacity.

How Many episodes were in Stranger Things Season 3?

TV Line reported in February 2018 that Stranger Things 3 would be eight episodes long, and Netflix confirmed the news on December 9 with a new video revealing the episode titles for all eight episodes. By comparison, Season 1 also had eight episodes, and Season 2 had nine.

What were the episode titles for Stranger Things Season 3

How did New Coke figure into Stranger Things Season 3?

On May 21, Coca-Cola announced that they would be reviving the New Coke flavor, originally (and unsuccessfully) launched in 1985, the same year that Stranger Things Season 3 is set. In addition to bringing New Coke back to market for a limited time, it was confirmed that New Coke would appear in multiple episodes of Season 3.

On May 22, Coca-Cola released a fake commercial for New Coke featuring Stranger Things characters Lucas, Max, Eleven, Mike, Steve, and Dustin. You can watch the retro goodness below.

What other Stranger Things pop culture pieces exist to consume?

Perhaps the best way to pass the time while we all wait for a new season is with a new Stranger Things-themed Dungeons & Dragons starter set, featuring a brand-new fantasy adventure akin to the one that Mike creates on the show: “Hunt for the Thessalhydra.” A newly-released prequel novel called Suspicious Minds also details the personal history of Eleven’s parents.

Will there be a Stranger Things Season 4?

Yes! In February 2020, Netflix and the Duffer Brothers officially announced that Stranger Things Season 4 was in production. However, filming has suffered considerable delays due to the coronavirus pandemic. As of March 2021, the show is continuing to film in Georgia. There’s no indication when Season 4 of Stranger Things will air.

Stranger Things Season 3 is now available to stream on Netflix.

More like this
Culture
5.18.2022 9:00 AM
Every Stranger Things monster from Dungeons and Dragons
By Robin Bea
Entertainment
5.18.2022 7:00 AM
Stranger Things cast unpack a "quite metaphorical" Season 4
By Eric Francisco
Entertainment
15 hours ago
'Umbrella Academy' Season 3 release date, trailer, cast, and plot for the Netflix superhero series
By Mae Abdulbaki and Mike Bloom