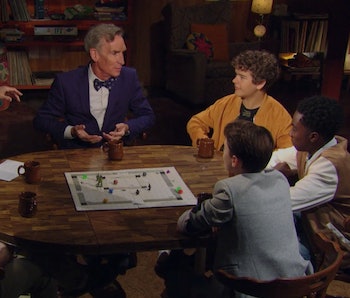 If you’re one of the many fans who blew through the entirety of Stranger Things 2 this weekend, Netflix might have given you a prompt to watch a new show called Beyond Stranger Things, a behind-the-scenes look into the world and inhabitants of the show. Five episodes in, a familiar face appears, but he’s not a Hawkins, Indiana local: It’s Netflix’s resident smart guy Bill Nye, giving the A.V. club a proper science lesson.

Nye, whose show Bill Nye Saves the World premiered on Netflix earlier this year, plays science teacher in the episode, explaining to Dustin (Gaten Matarazzo), Will (Noah Schnapp), Lucas (Caleb McLaughlin), and Hawkins Middle School science teacher Mr. Clarke (Randy Havens, who admits he knows nothing about science) the actual science behind the shadow monster’s use of the hive mind strategy and the strange neurological case of Phineas Gage, which comes up in the second season.

But the most fascinating part of his mini-lecture is his discussion on real-life multiverses, which he uses to give credence to the idea that the Upside-Down could actually exist.

He first teased this idea in April, in a Stranger Things-themed trailer for his Netflix show, but he waxes a bit more philosophical this time around.

There are two questions we all ask, he says: “The first one is, are we alone in the universe? . . . And, if it turns out that we’re the only living thing that’s sitting and thinking about this, that is very troubling and creepy.”

But the existence of the Upside-Down refutes the idea that we’re totally alone, says Nye, explaining that the fictional dimension somewhat fits the description of a multiverse — a decidedly nonfictional theory. Multiverses, he explains to the awestruck kids (and teacher), are “bubbles of universe” that expand alongside ours.

Nye oversimplifies a little here: the term “multiverse” is normally used to describe all parallel universes collectively. These parallel universes, in theory, could contain “alternate” versions of the individuals and objects in our own universe — much like the Upside-Down.

Nye also brings up the possibility that there is some sort of nexus where all of the parallel universes meet. “Is it possible that there’s areas like this, where the multiverses intersect?” he asks, pointing to his diagram.

This region — which Matarazzo calls the “Void” — is imagined in the Stranger Things universe as the all-black dimension straddling the regular world and the Upside-Down that Eleven traverses.

Scientists aren’t sure what the “Void” may look like in real life — or whether it, or any of the other parallel universes posited by the multiverse theory, really do exist. Nye certainly doesn’t have the answer, but it’s perhaps more important that he motivates the people around him to find out: As the show’s host asks the kids what they thought of Nye’s lecture, Matarazzo gushes, “It was wonderful.”