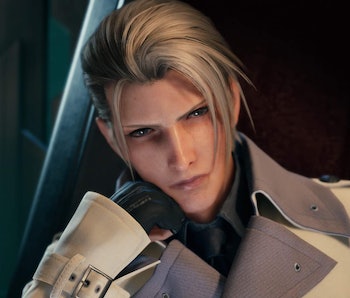 When Rufus Shinra takes his first step off the helicopter in Final Fantasy VII Remake, you know there’s something wildly different about him. The debonair heir to the Shinra empire is as cunning as he is charismatic. Even in the original game’s blocky graphical style, Rufus immediately feels like he’ll be a major player in the story to come. Except, that might be more true than ever before with FF7 Remake. The reimaging has the opportunity to make the new head of Shinra a standout character. There are even a few elements in the extended series that might hint at Rufus’ bigger role, particularly if we look at the new depths given to side characters in the first part of FF7 Remake.

Rufus Shinra is introduced near the tail-end of the Midgar section, which means he only gets a few minutes of screentime near the end of Final Fantasy 7 Remake. Fans of the original game, however, know that he and the Turks continue to play a big role. While his appearance in Remake echoes his original role, there’s one major difference: He can see the Whispers.

These shadowy figures are the arbiters of fate, pushing things on the correct path when events start to branch off from the original game’s continuity. In other words, they’re a force of nature that collectively ensures that Destiny is fulfilled in the grand sense. At the end of the Remake, Cloud and the party fight the Whispers in order to change Destiny. Across the game, only Cloud’s party and Sephiroth know of their existence. Not even Biggs, Wedge, or Jessie can perceive them.

But there’s one puzzling exception.

One scene in the Remake’s finale reveals that Rufus can also see the Whispers, even when Tseng and the other Turks cannot. This indicates that Rufus may have some limited knowledge of the original continuity somehow, or at the very least has some sense that Destiny is changing. Rufus and the Turks have always been fan-favorite characters, but their role in the latter half of the original game significantly dwindles. This is Square Enix’s chance to change all that and give them more of a starring role, particularly Rufus.

Whispers of the Future

The expanded universe of Final Fantasy VII devotes a lot of time to Rufus and The Turks. The entire plot of Advent Children revolves around their actions, and Rufus even tries to atone for his past sins by combating Kadaj and trying to cure the Geostigma disease. There are two pieces of media that are even more interesting for the character, however, with the first being the Japan-exclusive mobile game Before Crisis.

In this Turks-focused story, it’s revealed that Rufus Shinra himself is helping fund Avalanche’s insurrection. He doesn’t share Avalanche’s morals, but Rufus wants his father dead so that he can take control. It’s a fascinating revelation behind what Rufus was up to long before Cloud and company entered the scene.

The other piece of media is a spinoff novel titled, The Kids Are Alright: A Turks Side Story. The novel focuses on a character named Evan Townshend, and details how Kadaj and his brothers came around. It’s eventually revealed that Evan is the illegitimate child of President Shinra, and Rufus even knows of his existence. Most importantly, however, the novel introduced Kyrie Canaan and Leslie Kyle, two characters that were introduced into the continuity with FF7 Remake. This could suggest that Evan himself will be introduced in the future, and could play a role in the Shinra hierarchy.

If Rufus has any sense of how things play out in Advent Children, he may realize the error of his ways and seek to put a stop to whatever plan Sephiroth is trying to enact. Square Enix simply wouldn’t have chosen to have Rufus see the Whispers if they didn’t have plans on changing his character.

Rufus now has full control of the Shinra Electric Power Company. In one FF7 Remake ending cutscene, he orders Tseng and the Turks to “bring them in.” He’s seemingly referring to Cloud’s party, but it’s possible it refers to someone else entirely. Is it possible Rufus has created some kind of task force to combat the shifting tides of Destiny?

One of the biggest lingering questions of Remake is the fate of Zack Fair. Is he truly alive? Or is he only alive in a different timeline? There’s some speculation that Zack is going to be a playable character, and the perfect way to do that would be having him lead a team that Rufus puts together. If Zack really is alive, he’d need to be hidden away from Shinra, and Rufus is just about the only person in the world that would be able to pull that off.

This would also be a great way to bring back some of the more obscure members of the Turks, like Cissnei from Crisis Core: Final Fantasy 7. It’d be fascinating to see a second playable party supported by Rufus, that runs parallel to what Cloud and the others are doing.

Rufus is an incredibly complex character who’s much more than just a purely evil “bad guy.” Based on the expanded universe there’s an argument to be made that Rufus turns into a sort of anti-hero, and he clearly has some kind of major role to play in the future. Now that Square Enix is incorporating more of the expanded universe in Final Fantasy 7 Remake, it makes perfect sense that Rufus would get his redemption arc.

More like this
Gaming
Feb. 1, 2023
The Best Video Game Ever Made Just Got Its Own Holiday
By Hayes Madsen
Gaming
15 hours ago
FF7 Rebirth Producer Just Dropped a Massive Aerith Clue
By Hayes Madsen
Gaming
Jan. 27, 2023
Dirge of Cerberus is still the most incoherent Final Fantasy game ever
By Willa Rowe
LEARN SOMETHING NEW EVERY DAY.
Related Tags
Share: