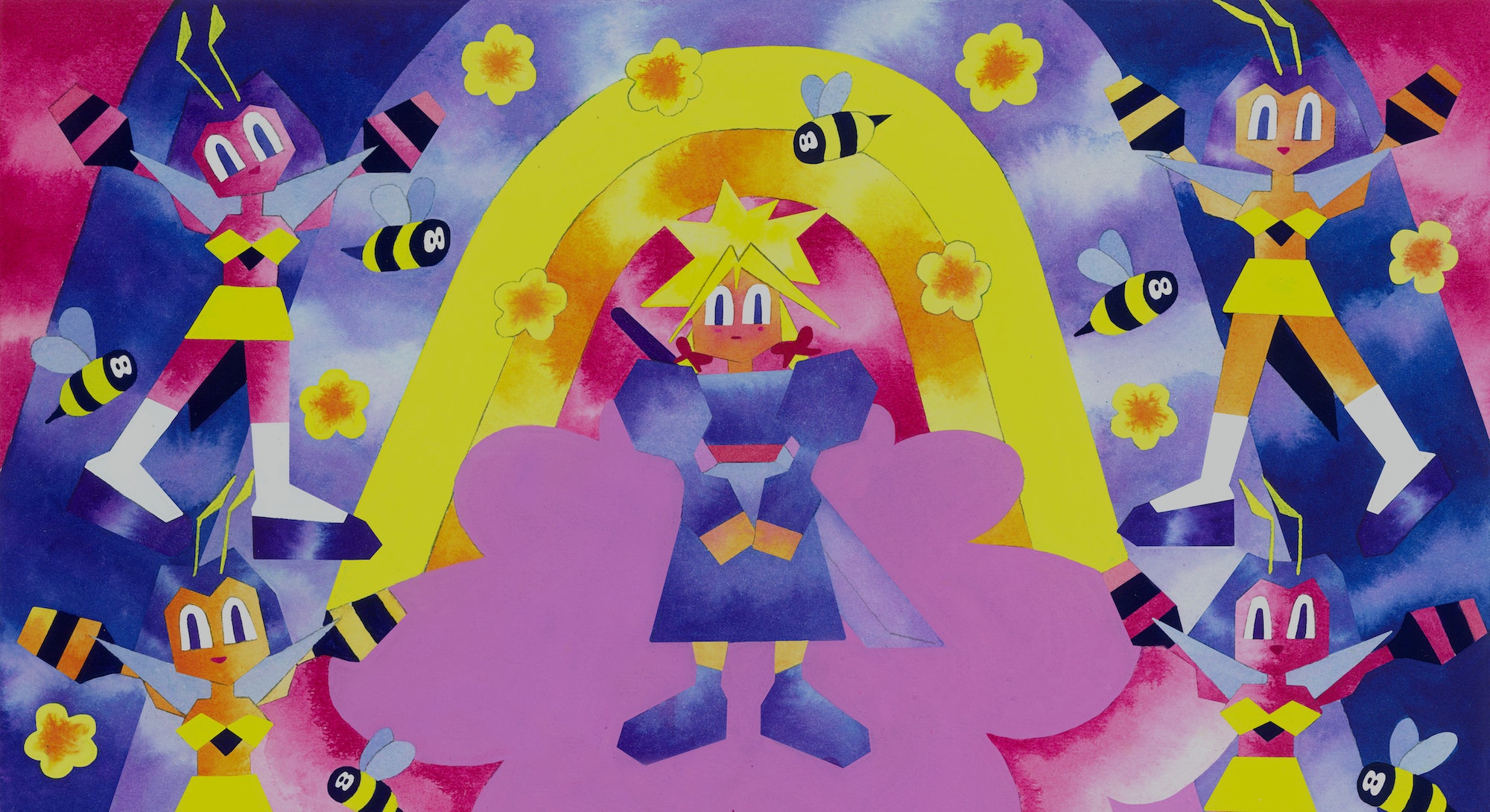 After years of breathless anticipation, Final Fantasy VII Remake exceeded even the loftiest of expectations.

Like the genre-defining 1997 game it's based on, FF7 Remake nimbly blends moments of high drama with utter absurdity. And perhaps no moment epitomizes this better than the game’s infamous Wall Market sequence.

Co-director Motomu Toriyama tells Inverse that some members of the Remake team weren’t initially on board with his bold reimagining of the sequence, which sees Cloud disguise himself as a girl in order to infiltrate the mansion of lascivious crime boss Don Corneo.

“Some people within the team argued that Cloud dancing is ‘not him,’” Toriyama says, “but I worked on the Wall Market scenes in both the original and the remake so, as the original creator, I pushed my ideas through to have Cloud bust some cool dance moves.”

“I pushed my ideas through to have Cloud bust some cool dance moves.”

The Video Games Issue is an Inverse celebration of retro favorites, forgotten gems, and the latest and greatest in interactive entertainment.

The heroes of Final Fantasy VII are an eco-terrorist insurgent group. How has your perception of Avalanche’s role in the story evolved over time?

Toriyama: The technological standards and societal situations of how various scenes could be depicted have changed since the time of the original. On top of that, as core creators including myself have become older, the standards of what we want to depict have changed as well.

Avalanche were the “good guys” in terms of wanting to save the life of the planet, but I believe it is up to the people living in the world to determine what exactly is “good.” Their actions, such as blowing up a Mako reactor, are terrorist activities that go against society. Being able to depict the devastation those actions can bring to Midgar, I couldn’t imagine them carelessly rejoicing the success of their plans like they did in the original.

“Their actions... are terrorist activities that go against society”

Each of the members have different feelings and struggles, and expressing these realistically led to the reimagining of Final Fantasy VII Remake. The members of Avalanche include people like Barret, whose priority is all about saving the life of the planet, and characters that act as if they are participating in a student movement. Then there are characters like Tifa, who think about the impact their terrorist-like activities bring to society, which cause them to hesitate to take a step further.

While that’s going on, Shinra is building a framework behind the scenes for their schemes, so our characters are unable to turn back. We structured the narrative to show the emotions behind these multifaceted characters, which then lead to the actions of Avalanche that are much deeper than what you saw in the original.

Why did the team choose the word "Intergrade" for this version of the game?

Kitase: In terms of the title, Intergrade, Director Tetsuya Nomura wanted to pay homage to the sound of “International” from the original title. [Editor’s Note: Final Fantasy VII International is an updated version of FFVII that was released in the West, which included additional elements and some improvements, that was sold in Japan.]

Additionally, I believe the word “intergrade” can mean “mid-way,” so it is meant to signify this being “between the Final Fantasy VII Remake base game and the next entry.”

What opportunities did Remake give you to elaborate on the romantic and flirtatious elements of the Final Fantasy VII story?

Toriyama: In Final Fantasy VII Remake, by narrowing down the story to the events leading up to the departure from Midgar, we were able to delve deeper into not just Cloud, Aerith, and Tifa’s relationships, but also the relationships and episodes between all the characters that appear in the game.

With that said, the date event in the Gold Saucer, from the original Final Fantasy VII, in which the player’s character preference was reflected into the relationship in-game, was a very memorable episode; so since this game focuses on the story while they’re in Midgar, I made sure to include a similar experience like from the original.

“The relationships between Cloud, Aerith, and Tifa were definitely ambiguous.”

From a visual standpoint, we were able to depict things more realistically, so if it seemed natural for a more intimate action to take place — for example, Cloud holding Tifa — I would take it a step further.

The relationships between Cloud, Aerith, and Tifa were definitely ambiguous, even back in the original, so I wanted to make sure I kept those relationships — pushing the limits of what we can depict, while still looking like two people genuinely caring for each other and being natural. The relationship between these three will continue to be depicted down the line, so I hope you continue to look forward to how we’ve remade the way they interact with each other.

What were some of the opportunities and challenges you encountered from expanding the Wall Market section of the game?

Toriyama: Depiction of sex and inclusion – including, but not limited to LGBTQ – shift depending on factors like societal situations and whatnot. So I believe what was acceptable during the time of the original needed to be updated based on the current standards.

The cross-dressing Cloud scene in Wall Market is representative of that, and I figured the fans who knew the original had high expectations for how this scene would be reimagined; so, I swung to the other side of the spectrum and decided I was going to heavily evolve the scene to make it an entertainment spectacle that is on par with the standards of modern technology, and so that it would become one of the most iconic scenes in Final Fantasy VII Remake.

“The original needed to be updated based on the current standards.”

Some people within the team argued that Cloud dancing is “not him,” but I worked on the Wall Market scenes in both the original and the remake so, as the original creator, I pushed my ideas through to have Cloud bust some cool dance moves.

Final Fantasy VII Remake is a new piece of work by a hybrid team that includes younger creators and veteran creators like me, who were around since the production of the original game. There are some fans of the original that tend to be conservative, even amongst the younger staff, so I think some of the challenges I faced involved removing those limits and allowing them to express things more freely; in turn, that made it closer to what the team environment was like during the production of the original, which was great.

Early concepts for Yuffie and Wutai changed a lot ahead of the original release of Final Fantasy VII. Did you revisit or rework any of those early ideas for Episode Intermission?

Toriyama: This is not an idea that was originally cut per se, but we took the idea of the Wutai “Happy Turtle” Newsletter from the original Final Fantasy VII and incorporated that into Episode Intermission with some updates to make it a bit more elaborate.

Not limited to this, though — we took great care with the various episodes and ideas from the source material and remade (reinterpreted, reimagined) them to be on par with modern standards of technology and characteristics of game design so that they’re fun to play and watch. I think that’s what makes Final Fantasy VII Remake so appealing.

Also, Wutai was placed in a more important position in Final Fantasy VII Remake and Episode Intermission, as the opposing force against Shinra. By having groups that oppose Shinra — not just Avalanche — take a more prominent role, I believe we can create an even more suspenseful story.

Are there any plans to make games like Crisis Core and Dirge of Cerberus available on current-gen consoles for those who missed them the first time around?

Kitase: There are various tidbits of lore and background information from other Compilation of Final Fantasy VII titles in Remake and Episode Intermission. Additionally, we have two titles slated to be released on the mobile platform – The First Soldier and Ever Crisis — that reference not only the lore of the Compilation titles in an even more expanded Final Fantasy VII world, so I do hope you look forward to these.

In your view, why has Final Fantasy VII continued to be so meaningful to people all over the world? What do you personally love most about it?

Kitase: One of the major themes of this title is the “life of the planet.” The threats on our real-life planet shifted over the course of time—from pollution, to fear of atomic weapons, to the current global warming issues.

Final Fantasy VII used fantasy to depict the “life of the planet” as a more abstract concept, and so it can be replaced at any time with issues in the real world. Because it’s a universal theme, I think that’s why it continues to live on as a meaningful title in any generation.