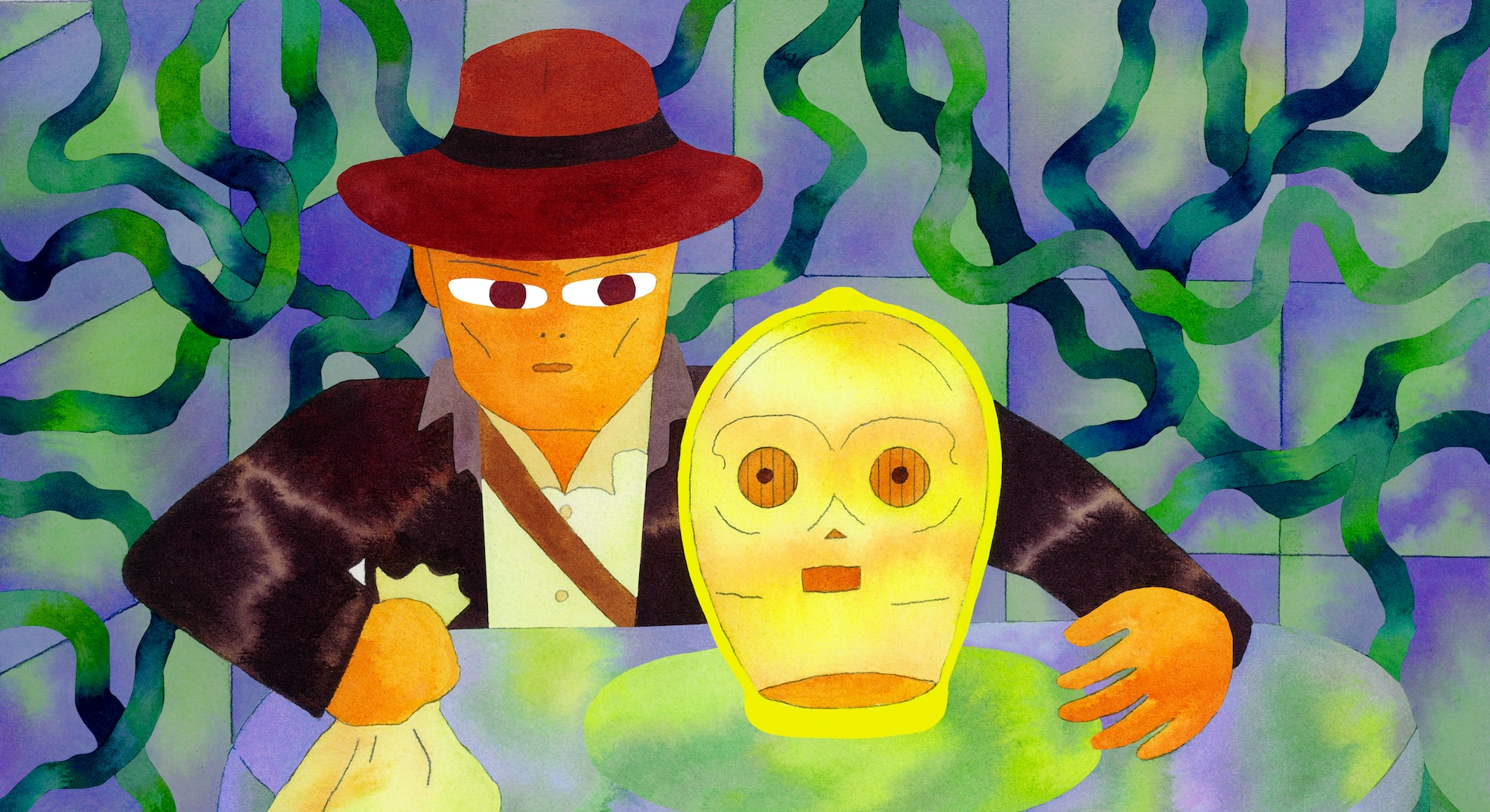 “For a genius, George Lucas sure has a lot of bad ideas.”

Three years before The Phantom Menace revealed Lucas’ shortcomings as a director, Computer Gaming World fired the opening laser blast, calling his 1996 video game, Indiana Jones and his Desktop Adventures, one of the worst releases of the year. While some critics defended the game, most referred to it as repetitive and “unambitious”.

Today, the game has been all but completely forgotten, but it does boast some notable trivia about everyone’s favorite whip-wielding archaeologist. Most notably, it features a bizarre crossover between Indy and a certain golden droid from another Lucasfilm property.

This is the story of how Indiana Jones met C-3PO, and how he may have discovered an entirely new genre of video game along the way.

Designer Hal Barwood, who worked at LucasArts between 1990 and 2003 before founding Finite Arts, tells Inverse that Indiana Jones and his Desktop Adventures wasn’t trying to revolutionize the gaming industry.

“It was kind of a ‘casual’ game,” he says. “The game was meant to be easy to play and easy to finish. It wasn’t supposed to be a huge demand on your time.”

“I kind of invented casual games at LucasArts”

However, Barwood maintains the game was ahead of its time and feels its rough reception was unwarranted.

“I kind of invented casual games at LucasArts before there was such a thing,” he says. “The first one we did was Indiana Jones and his Desktop Adventures. Later on, casual gaming became huge with things like Animal Crossing, but back in 1996 it wasn’t a genre yet, so the critics were very hostile.”

LucasArts’ legacy for high-concept originals like The Secret of Monkey Island didn’t help, either.

“They looked to Lucas to do high-end adventure games,” Barwood says. “So the idea that we’d do a game with crude graphics was unacceptable. But we were trying to get into a different gameplay space, so I felt that the critics had little vision.”

If you take a look at the game — or even play it via an online emulator — you can see both sides of the argument. The graphics are crude even for 1996, resembling the first Zelda game from a decade earlier. Still, it’s easygoing and accessible, like the original Pokémon games where you might mosey around for a bit, catch a Pokémon, and then save your progress to end a short gaming session. Desktop Adventures lets you play an easy little mission as a nice distraction. You could even leave the game window open while you used other programs.

The missions in Desktop Adventures consist of several randomly generated tasks, so you never know exactly what storyline you’re getting even when they’re all kind of the same. Most begin with Indy walking into the office of archaeologist Marcus Brody to discuss some sort of artifact recovered, be it an “Aztec Sword,” an “Eagle Dagger,” or a “Coatlicue Idol”.

From there, you set out to find the object in the various temples and catacombs of 1930s Mexico while fighting snakes, spiders, and, of course, Nazis. Once you find the object, you hand it to Brody and start your next adventure.

Interestingly, one of the artifacts is called the “Toltec Crystal Skull.” When I discovered this in my research, I thought for an entire 15 minutes that the fourth Indiana Jones movie was born out of this very obscure video game. But no, crystal skulls have been appearing in Indiana Jones novels since 1993, and they’re based on actual historical artifacts — sort of. While there are real crystal skulls made of quartz that were claimed to be from pre-Colombian Mesoamerica, these archaeological hoaxes were likely from 19th century Germany and then passed off as hundreds of years older.

The crystal skull in Desktop Adventures looks rather alien, which is not true of the crystal skulls in the previous Indiana Jones comics and novels. So, perhaps the game did inform the fourth movie after all? (It may have also informed the movie in another way, which I’ll get to shortly.)

However, there’s another object in the game that’s even more notable than the crystal skull. In one mission, Brody tells Indiana Jones to go fetch a “Strange Idol” that’s been frightening some locals. When you finally reach the item, it turns out to be the head of C-3PO. Indy’s word bubble even says, “I’m not entirely sure it originated here on Earth!”

“That wasn’t my idea; that was the team’s idea,” says Barwood. “Both Star Wars and Indiana Jones were Lucasfilm, but we had to get permission from the higher-ups to use C-3PO. They were fine with it, though, and it amounted to a good little Easter egg.”

To be fair, this wasn’t exactly the first Indiana Jones/C-3PO Easter egg. Hieroglyphics in Raiders of the Lost Ark feature C-3PO and R2-D2, and lots of other references occur between Star Wars and Indiana Jones as well. But this is the closest the two franchises ever came to interacting face-to-face. (At least until 2008 when Lego Indiana Jones: The Original Adventures references the 1996 game by having Indy offer up C-3PO’s head to Belloq.

“If they didn’t like it, we’d just ask for forgiveness later.”

The strangeness of Desktop Adventures doesn't end there, either. In the same mission where you find C-3PO’s head, there’s a hidden level that appears if you’re willing to wait for it. If you wait a bit before rushing into the room, the next door will lead to a lake that you must cross with a boat. Once your boat reaches the other side, Indiana Jones is abducted by aliens. And that’s the end. Indy is taken to outer space and never seen again.

The bummer is, I could find zero images of this online, and even after playing Desktop Adventures for three hours, I never did get the “Strange Idol” mission to appear. Fortunately, Barwood confirms the alien abduction ending was real and that George Lucas himself inspired it.

“I’d known for many years before Crystal Skull that George was interested in doing a science fiction version of Indiana Jones,” Barwood says. “In fact, when I did Indiana Jones and the Infernal Machine a few years later, I wanted to do an idea with aliens, but George forbade it because they were getting ready to make Crystal Skull, which, of course, is not a very good movie.”

For one mostly hidden mission in Desktop Adventures, though, an alien abduction was fine.

“No one would really care about that so we didn’t ask permission,” Barwood says. “And if they didn’t like it, we’d just ask for forgiveness later.”

So, Indiana Jones and his Desktop Adventures not only featured C-3PO’s head, but it also had a crystal skull and an alien story, both of which, of course, would occur in the fourth film.

Somehow, that’s still not the end of this bizarre story.

The next year, Barwood created a game for Star Wars called Yoda Stories. It’s basically the Star Wars version of Desktop Adventures with a few back-end upgrades to make gameplay less predictable. Vindicating Barwood’s idea about casual gaming, Yoda Stories was more successful and is more fondly remembered, even if the reviews at the time weren’t much better than its predecessor. And, much like Indy’s game referenced Star Wars, Yoda Stories repaid the favor. In a bonus level of Yoda Stories, Luke Skywalker meets the same exact alien that Indy met in his game. They exchange pleasantries and then the alien brings Luke to the planet Xantar and introduces him to none other than Indiana Jones.

While I couldn’t locate the alien or C-3PO scenes in Indiana Jones and his Desktop Adventures, the scenes from Yoda Stories are readily available, probably owing to the latter’s relative popularity. So, here it is, Luke Skywalker and Indiana Jones meeting each other.

It’s an awkward exchange, but Luke does tell Indy he looks a lot like his friend Han Solo. Indy doesn’t answer, though. He just hops in a spaceship and presumably flies back to Earth.

Wait ... was Han Solo actually Indy all along?

The Indy cameo in Yoda Stories technically resolves the alien abduction ending of Desktop Adventures. But more than likely, the crossover is just a bizarre joke. After all, very few people liked Desktop Adventures, and it’s likely that even fewer discovered the hidden alien abduction scene. Perhaps 25 years after its release, the game deserves a little bit more notoriety.

After all, not only did it help usher in a new form of gaming, but it also connected Indy to the Star Wars universe and offered his fans a prescient warning about Indiana Jones and the Kingdom of the Crystal Skull. If only the game weren’t so damn forgettable, perhaps we all could have seen that trainwreck coming.