The Future is here 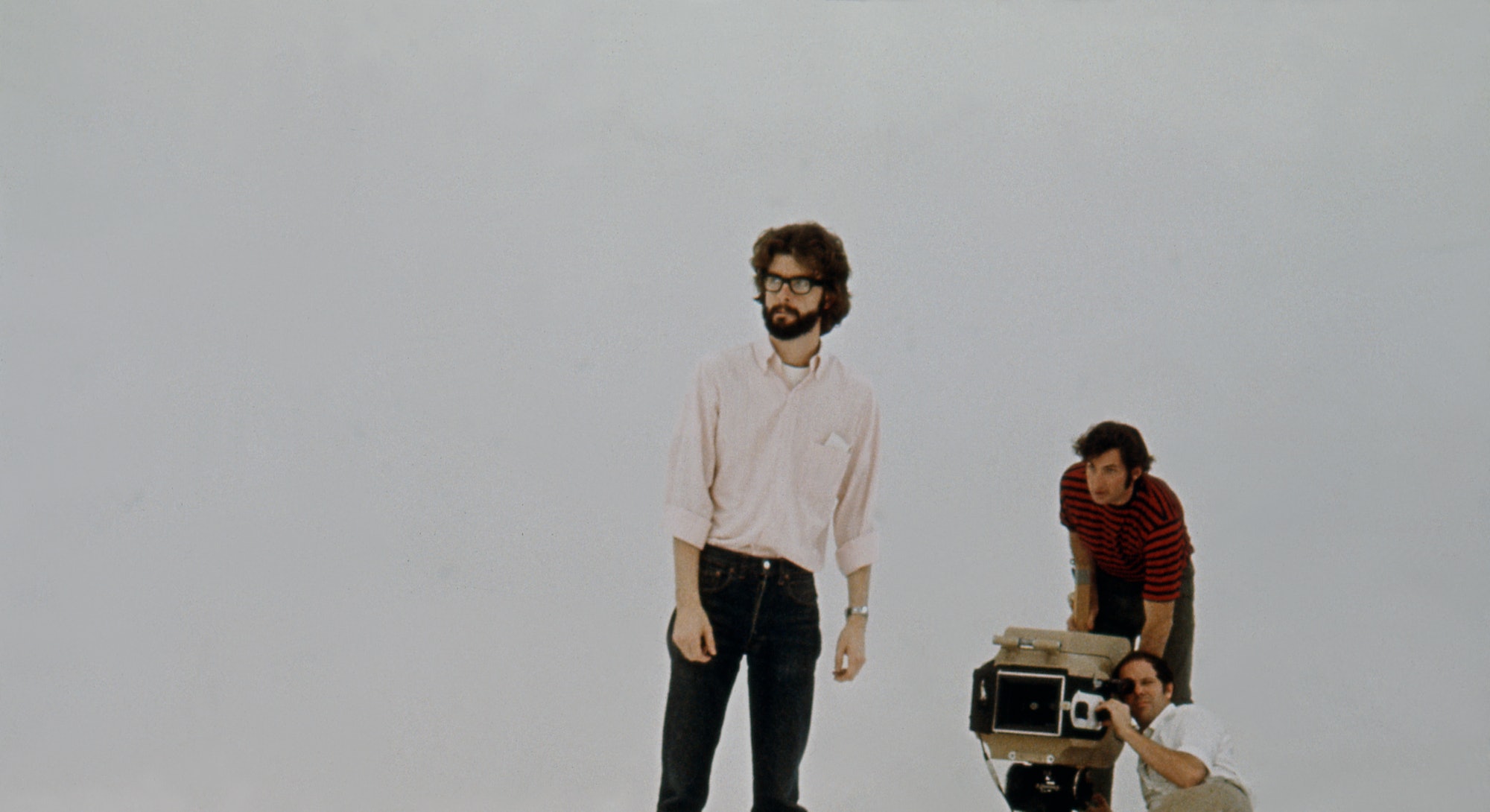 As George Lucas approached the security gates to Warner Brothers studio in Burbank, California, he was terrified.

The year was 1971, and Warner Bros. executives had openly registered their disdain for his directorial debut THX 1138. An atmospheric and impressionistic sci-fi film, THX 1138 is set in a dystopian future where humans are permanently drugged, controlled by android police, and forced to live underground. It premiered 50 years ago on March 11, 1971.

Lucas had listened to — and then immediately rejected — a number of the studio’s suggestions to improve the film. Most recently, they’d asked him to move scenes with the scary shell-dwelling characters from the end of the film to the beginning. The studio argued the move would immediately shock and excite audiences.

Lucas disagreed, and according to Matthew Robbins, his collaborator and classmate at USC School Of Cinematic Arts, Warner was starting to wear out the future Star Wars creator.

“The executives didn’t see the harm in what they were trying to force George to do,” Robbins tells Inverse. “George was going crazy. He said they didn’t have the right to do that.”

Lucas was so incensed that, going into the last test screening, he had formulated a plan to ensure that Warner didn’t completely massacre THX 1138. The first step was getting onto the studio lot in a VW bus. The vehicle wasn’t Lucas’ own. It belonged to Robbins, who happened to be hiding in the back alongside their close friends Walter Murch and Caleb Deschanel.

After all his issues with Warner, Lucas was so scared executives were going to take THX 1138 away from him and hire another editor to finish it that he told Deschanel, Murch, and Robbins they had to get the workprint out of the projection room as soon as the screening was over.

Once inside the lot, Lucas parked under the iconic Warner water tower. The quartet synchronized watches. Lucas headed to the screening room, where he expected to, once again, have THX 1138 torn to shreds by executives who just didn’t get what the film was about or who it was for.

It was only right that Robbins was at the heart of this key escapade to save THX 1138. Back when they were at USC, Lucas had asked him to write the original short film that the feature was based on.

“He came up to me when we were at a party, it was at the home of our animation teacher,” recalls Robbins, who is still extremely close with Lucas to this day. “George and I were in the kitchen. He had this underground story, this character THX, he wanted a chase scene. He just said, ‘Could you write it up?’ I said sure. I mean, it wasn't like this huge thing.”

Robbins, who would go on to have a hugely successful screenwriting career with the likes of The Sugarland Express, Mimic, and Crimson Peak, spent a weekend on his typewriter putting it together. Electronic Labyrinth: THX 1138 4EB, to give the short its full title, proved to be a revelation.

Making the film with almost no budget was a bigger challenge, but the always resourceful Lucas had a solution. He taught filmmaking to members of the U.S. Navy in order to gain access to various filming locations, which gave his film scope and ambition that immediately made it stand out.

“It was sort of like a little movie,” says Robbins. “In those days at film school, anyone who made anything that actually resembled a movie was a star.”

Electronic Labyrinth: THX 1138 4EB won first prize in the dramatic category at the National Student Film Festival in New York in January 1968. Suddenly, Lucas was being sought after by Hollywood bigwigs. He soon had a scholarship at Warner Bros., where he became close friends with another young filmmaker, Francis Ford Coppola. There was just one problem, Hollywood was in a massive decline, both creatively and financially.

“When we were coming out of film school, Hollywood wasn’t really the target. That was for old people, who didn’t allow anybody else to be in there. None of us wanted to be in Hollywood,” says Robbins. “That was very stodgy, middle class, middlebrow entertainment. It had nothing to do with what anybody in film school was about. Nothing.”

But the savvy Coppola, who by this point had directed Dementia 13, You’re A Big Boy Now, and Finian’s Rainbow all before the age of 30, saw an opportunity to make the movies he actually wanted. Lucas and Coppola created their own production company American Zoetrope, and declared, ‘We can take over the castle! We can do this!’

“Francis was the one who went into Warner Bros. because he was so high energy and full of ideas,” says Robbins. “He had vision and leadership. He got this seven picture deal for all of the new talent that was emerging.”

THX 1138 was the first film American Zoetrope made for Warner Bros. as part of this deal. Lucas would direct, with Murch as his co-writer, and they decided to shoot in the Bay Area instead of Los Angeles.

Bruce Chesse was cast alongside his brother Dion and his father Ralph, and the trio are part of the film’s key trial scene where Robert Duvall’s THX is charged with failing to take his drugs. For Chesse, the decision to shoot in San Francisco meant that Lucas could make his own “decisions freely and do things that the studios didn’t know anything about.”

Another local actor cast in the movie was Maggie McOmie. She took the role of LUH 3417, THX’s love interest, after Susan Anspach, who would go on to star in Five Easy Pieces and Play It Again, Sam, refused to shave her head.

When it came to talking to his actors, both McOmie and Chesse confirmed that Lucas was much more fascinated with the technology of filmmaking, and instead focused on what he was going to accomplish with the camera.

“George didn’t pay much attention to actors,” Chesse tells Inverse. “He was not very communicative. He didn’t even give us a chance to rehearse or even do a read through.” McOmie adds, “George didn’t say too much. He just said enough. That was good. He’d just give general direction about the feelings he wanted.”

Although both admit that filming was a little disjointed at times, there was a familial feeling throughout the production, as pretty much all of the cast, except for Duvall and Donald Pleasance, already knew each other.

Even though he wasn’t involved in the writing, Robbins still helped Lucas assemble a board of photographs that showed the “look and feel of the film,” which helped to get it greenlit. He even filmed the final shot of THX 1138 alongside Deschanel. “He made it like he was making one of his student films,” says Robbins. “We were just goofing off.”

Which brings us back to Burbank and the VW Bus. After two hours of waiting and playing cards, Murch was told to go up to the projection room, listen to hear if THX 1138 had finished, and then impersonate an editor.

“He went in and said, ‘I’m here from the THX cutting room. You guys got a workprint here for me?’ So the guy gave him the cans, picture, and sound. We got the cans, put them in the car, waited for George to get back. Then took off. We smuggled the workprint off the lot.”

Unfortunately for Lucas and everyone associated with the film, Warner was still in charge of promoting and releasing THX 1138. While the film got some impressive reviews, it was a flop at the box office.

“The studios did not like Coppola and Lucas, because they were rebels.”

According to Robbins, the saga permanently scarred Lucas and his “reaction to business minds who were going to have opinions about creative issues.” In fact, Lucas even went as far as to tell his close friends that he felt “cruelly used” by Warner Bros.

“He was really invested emotionally, as you do when you make a movie. This was his calling card. He saw THX as a showcase of his abilities with the medium itself. It was not a story in the traditional sense. It was dystopian, moody, brooding, and different.”

But while Warner Bros. didn’t understand THX 1138, everyone in San Francisco did.

“We all loved it,” says Chesse. “It was something that we all had a part of so we felt it was an extension of ourselves. It was a revolutionary moment in film history. The studios did not like Coppola and Lucas, because they were rebels. The studios didn’t have the control over them.”

McOmie even looks back at her performance with slight regret, as she wishes she’d done more with her acting career. After the film, she moved to Los Angeles and got an agent. But THX 1138 was so different, and her role so unique, that “people didn’t know where to put or cast” her. “There wasn’t anything out there like it. I’m so proud that I was cast in it,” McOmie says.

Lucas’s reaction would go on to change the shape of American cinema. After being told that THX 1138 was too bleak, experimental, and dystopian, he decided to do something popular, nostalgic, and all-American, with kids and a lot of rock and roll music. The result, American Graffiti, was set on the last day of high school in 1962 and features arguably the greatest soundtrack ever. It would become one of the most profitable movies in Hollywood history. 20th Century Fox then gave Lucas the money to make his next sci-fi adventure, which this time would be set in a galaxy far, far away, though it still shared some similarities to THX 1138.

“The stormtroopers and the whole atmosphere of the evil Empire. The dirty high tech, the unfinished high tech, the grubby high tech. That would all appear in Star Wars,” says Robbins.

When Star Wars turned into a global phenomenon upon its release in 1977, and after his trials and tribulations on THX 1138, it made complete sense to Robbins that Lucas hired Irvin Kershner and Richard Marquand to direct the immediate follow-ups to the first movie.

“He was happy to let the other directors make movies,” Robbins says. “He just wants the footage in his editing room. He just loves the sheer fun of using these tools. Therein lies the key to George’s sensibility.”