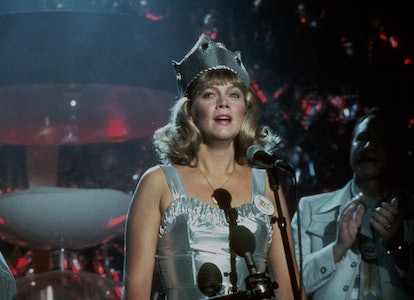 Some of the best low-key science fiction films are so subtle we might not even classify them as sci-fi. In 1986, one year after the blockbuster success of Back to the Future, legendary director Francis Ford Coppola's Peggy Sue Got Married became an accidental rebuttal to Marty and Doc. Whereas Back to the Future sends Marty McFly back to 1955 to soak up his parents' nostalgia, Peggy Sue sends Kathleen Turner back to 1960 to learn that it was... kind of terrible?

Leaving Amazon Prime at the end of February 2021, Peggy Sue Got Married is one of Coppola's best movies and a vastly underrated time travel flick. It also oddly predicted the themes and aesthetic of WandaVision. Here's why.

One of the best thematic punches of WandaVision is the idea that nostalgia for baby boomer suburbia is a trap. In WandaVision, we've learned there is some kind of literal nostalgia prison, but the show smartly critiques our desire to retreat into false narratives, too. Wanda can't be a '50s housewife and an '80s mom at the same time. Nostalgia might make people feel better, but the downside is a perversion of reality.

As a commercial TV product, WandaVision could be cynically viewed as an artsy Marvel show for people who don't like actual artsy things. Do the Easter eggs to other Marvel things matter more than the story? Maybe, maybe not. But the struggle of Wanda in the series is pretty close to the thematic struggle of Peggy Sue.

In other words, if WandaVision was a soft sci-fi movie released in the '80s, it would be Peggy Sue Got Married.

Peggy Sue Got Married opens in 1985 as Peggy heads to her 25-year high school reunion. She married her high school sweetheart Charlie (Nicolas Cage) but now she's seriously thinking about a divorce. Then, somehow, she finds herself back in her teenage body in 1960 just before high school graduation and her pivotal decision to marry Charlie.

We don't know how Peggy time-travels into her old body (kind of like Wolverine in Days of Future Past), but that hardly matters. The theory of time travel in Peggy Sue is briefly described as a burrito — time can bend back on itself, and you can fill it with whatever you want. (Skip to 1:50 in the video below for the full in-universe explanation.)

Like the unsettling sitcom vibe of WandaVision, Coppola splits the difference with how we're supposed to feel about 1960. This isn't like American Graffiti or Back to the Future, where the past is treated with a warm and fuzzy feeling. Often, you're made to feel uncomfortable not just by the blatant sexism of the era, but also because the banalities are so jarring. There's no canned laughter in Peggy Sue Got Married, but if there was, the effect would be very similar to the first two episodes of WandaVision.

Again, think Back to the Future. Yes, there are some jokes made about anachronisms (Peggy tries to write the Beatles hit "She Loves You" several years early) but the overall thrust of the movie is about a woman trying to make sense of her life from a different point of view.

Can Peggy Sue change her destiny? Should she try? To be clear, at no point does Kathleen Turner encounter a WandaVision-esque energy field at the edge of her hometown. But there's one there anyway, and during a particularly interesting sequence with her grandfather, the movie briefly suggests that some kind of time travel might be real. Like Dorothy's journey to Oz (in the movie) this might not be only a dream, and elements of the present are seemingly altered by Peggy Sue's movement to the past.

Like WandaVision, Peggy Sue Got Married also centers much of Peggy's motivations around the survival of her children. Of course, when she's back in 1960, her future children are abstract concepts to everyone she meets. In WandaVision, Wanda's twin boys seem to occupy a similarly nebulous realm of "truth." Do these kids exist? Does Wanda's future exist?

Reclaiming the future by rewriting the past is a common enough science fiction trope. And while WandaVision hasn't actually given us any literal time travel so far, the thematic impact of time travel on fiction — the idea of seeing life in a more honest way — is used on the show much the same way as Coppola uses it in Peggy Sue Got Married.

In both WandaVision and Peggy Sue, the concept of nostalgia isn't just a time travel joke. Instead, the question is much more unsettling — what if nostalgia was a weapon?

Peggy Sue Got Married is streaming on Amazon Prime until March 1, 2021.