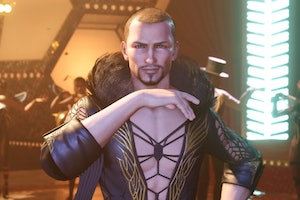 What's next for Final Fantasy VII Remake? Square Enix's highly anticipated remake of the beloved RPG was a massive success last year. It received rave reviews and sold more than 5 million copies in four months. Even though it is clearly the first part of a longer saga, Square Enix has only lightly teased the sequel.

But that could change sooner rather than later. An FF7 Remake themed concert is happening online on February 13, and fans think that a special announcement could happen when Co-Director Motomu Toriyama is scheduled to speak.

Trailers for games like FF7 Remake and Kingdom Hearts III have previously debuted during concerts like this, so fans are very excited about the possibilities with this upcoming event. On Monday, Twitter user @aitaikimochi shared a translation of a video featuring Toriyama where he says, "I’ll be taking part in a special program to discuss a few things about FF7R revealed only during the program."

Some kind of news is to be expected, but what exactly will it mean? Realistically, here are three possibilities for what might happen during the Final Fantasy VII Remake Orchestra World Tour concert on February 13.

One of the most plausible FF7 Remake-related announcements that Square Enix could make at this event is a next-generation port. FF7 Remake was released right at the end of the last console generation, so there's a lot of room and demand for next-gen enhancements that could make the RPG look and sound even better.

A massive next-gen update like this would also allow them to fix some of the game's issues or even add new story elements to the first part of the remake if they wanted to. While a PS5 remaster is the most likely, Square Enix might also take this opportunity to bring the remake to other platforms like PC, Xbox One, and Xbox Series X. Sony has exclusivity on the game for one year post-release, so it's possible that the game could come to Xbox consoles anytime after April 10, 2021.

While this one is the most farfetched of these three possibilities, Square Enix might use this concert as its first opportunity to tease the sequel to FF7 Remake. The first game was totally MIA for a long stretch of time after its initial announcement, so it's possible that Square Enix might wait until closer to its release to tease this sequel.

A sequel is inevitable, and Square Enix could grant those in attendance an early look at what's next for the FF7 Remake series.

While it's fun to speculate about what could be shown, Gematsu is warning fans to not get their hopes up. While Motomu Toriyama's message was originally perceived to say that an announcement was coming, Gematsu's translation reveals that he's just going to hold a discussion about the first game.

"There'll be a performance of course, but there's also a bonus program in which I participate and talk a little bit about Final Fantasy VII Remake, which you'll only be able to hear [in the program]," reads Gematsu's translation. It's possible that this still entails some sort of reveal, but Toriyama may just offer deeper insight into the making of one of 2020's biggest games.

Whatever it is, fans of FF7 Remake will almost certainly get excited about learning more about the remake.