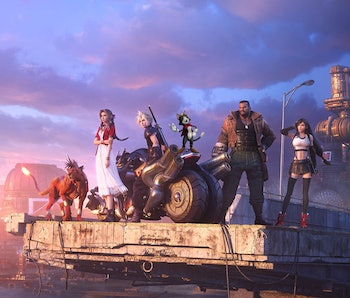 Final Fantasy VII Remake has already made plenty of interesting changes to various characters, but the upcoming Part 2 may make one of the most radical changes yet. And a major Easter egg from the first entry may have already revealed it. Is the most widely despised FF7 character getting a drastic rework?

What if Cait Sith is just the cat? Hear me out.

When I first played Final Fantasy VII in the ‘90s, and a giant white blob with a black thing on its head approached me in Gold Saucer to tell my fortune, I fully believed Cait Sith was the blob (which is a giant, robotic stuffed Moogle). Was the black thing a hat or something? Don’t judge me too much, though. I was younger than 10 years old, and the polygonal character models can be difficult to parse, especially if you don’t look at character art. It felt satisfying when the little tuxedo cat in a crown shows up in FF7 Remake, sans the fat ogre Moogle, to witness the destruction of the Sector 7 plate.

Cait Sith witnesses the destruction from afar and falls to his knees in despair. It’s a jaw-dropping cameo for fans yet a moment that must seem pretty baffling for newcomers. The game doesn’t bother to explain any of the vital context: Cait Sith is a cat robot controlled by Reeve Tuesti, the bearded head of Shinra’s Urban Development division, and the one executive at the company who seems to have a conscience. This detail is a mid-game reveal in the original, and the first FF7 Remake entry lays the groundwork for his redemption arc.

Reeve at first uses Cait Sith to spy on the party, then sacrifices himself at a vital moment (only to be replaced by another robot), and then double-crosses Shinra to help the party save the planet.The thing is, Cait Sith is perhaps the single most absurd and campy thing about the original game.And this is a game where cross-dressing plays a crucial role, an old man floats around on a magic ball, and a martial arts master gets in a slap battle with another woman. If he’s in your party when Aerith dies, Cait Sith does a strange little dance.

There are entire videos on YouTube and articles discussing his absurd role in the game, and he’s widely regarded as everyone’s least favorite party member.

How the much more realistic FF7 Remake Part 2 handles Cait Sith is going to be interesting, to say the least. What is he even going to look like?

Based on the in-game character models (like the cutscene featured above), Cait Sith appears to be thicker than Barret. In battles, Cait Sith is positively enormous, dwarfing every other character by a wide margin to the extent that it can occasionally feel immersion-breaking.

Consider that Barret is 6 feet 5 inches tall. In official materials, the cat portion of Cait Sith is listed as 3 feet 4 inches. Assuming the stuffed Moogle is Barret-sized or bigger, we’re talking about a combined height of 9 feet 9 inches (if the cat stands directly on top of the Moogle’s head). That’s larger than a standard Lady Dimitrescu from Resident Evil Village!

Just try to imagine a bipedal cat with a trumpet riding an enormous white blob with little bat wings in the hyper-realistic world of FF7 Remake clocking in at about the height of your average basketball hoop. Something about it just doesn’t compute. How could developers possibly make Cait Sith work in Part 2? It would look absurd — especially when you remember that one of his Limit Breaks can potentially absorb the other part members to make a kaiju-sized Cait Sith, Moogle and all.

The obvious solution to this conundrum is right there in Part 1: Cait Sith will just be the cat.

He may even be downgraded from full party member to a mascot or ridealong companion like Jiminy Cricket in Kingdom Hearts. He can and should still participate in battles and cutscenes, but is it really necessary to make him a full-on playable character?

Before anybody riots over this, there’s more than one precedent. Cait Sith spends most of the animated sequel film, Final Fantasy VII: Advent Children, riding on the lion-wolf Red-XIII’s back, shouting with a Scottish accent and doing little else. In both the prequel game Before Crisis and sequel Dirge of Cerberus, Cait Sith also appears without the Moogle. The little cat robot is playable in both games.

In fact, the only other time that Cait Sith’s Moogle has appeared outside of the original game is in the reworked opening sequence to Advent Children Complete in which Barret’s adoptive daughter Marlene narrates the original story. In the original version, he’s riding Red-XIII, but it was changed for the final version for reasons unknown.

Clearly, the folks over at Square Enix don’t really like the giant Moogle anymore, so does that mean Cait Sith will only ever appear as he does in Part 1? Now that Destiny itself has been destroyed, anything is possible.