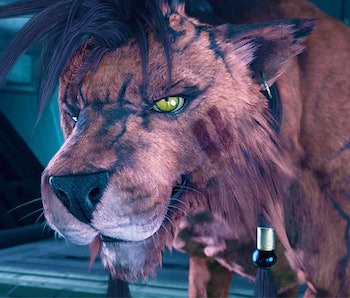 Final Fantasy VII Remake ended on a cliffhanger, potentially upending our expectations of how the iconic 1997 story will play out in subsequent chapters. Director Tetsuya Nomura said in an interview for the game's Ultimania compendium that he hopes to release the next installment "as soon as possible," but also suggested that the team hadn't quite decided how best to carve up the sprawling tale. There's a long-shot chance we could hear about the release date at Tokyo Game Show in late September, but it's safe to say we probably won't be playing the sequel anytime soon.

Even if the plot of FF7 Remake Part 2 departs significantly from that of the original game, we can assume that Cloud and his companions will explore familiar locations like Gold Saucer, Costa del Sol, and Wutai. One of the locations we're likely to see in the next installment is Cosmo Canyon. There, we're likely to finally get the answer to a question many of us have had for decades.

Spoilers ahead for the original Final Fantasy VII.

Cosmo Canyon is where Cloud learns about Red XIII's past, how the Lifestream works, and the threat Sephiroth represents to the Planet. And there's one huge, goofy mystery FF7 Remake Part 2 will absolutely, positively have to explain — what is happening with Bugenhagen's butt?

Bugenhagen is the village elder of Cosmo Canyon and adoptive grandfather of Red XIII. He's holed up in the observatory at the top of the ridge, with a large telescope and some kind of spiffy Danger Room / Holodeck setup that's just perfect for spontaneous lectures about ecology and spirituality.

I played Final Fantasy VII for the PlayStation (1) back in 1997, and several more times in the years since on other platforms. My experience with the FF7 spinoff games like Crisis Core and Dirge of Cerebus is pretty much exclusively confined to falling down internet rabbit holes for articles like this one. I have since learned that he's floating on a large green Materia, with his legs crossed in yogi fashion. Frankly, this is in no way obvious in the original FF7.

And no, I am not the only person who was confounded by Bugenhagen's lower half.

As a kid, I decided Bugenhagen was a bee, maybe the kindly, oblivious grandpappy of one of those girls hustling at the Honey Bee Inn in Wall Market. It wasn't weird to imagine Final Fantasy including non-human characters in major story roles, particularly because I was 100 percent convinced Emperor Gestahl of Final Fantasy VI was a lhasa apso. (This is a particularly foofy breed of small dog preferred by fancy older ladies.) This headcanon made Kefka a far worse villain in my eyes — not only did he destroy the world, he kicked a lap dog off a cliff!

Dog-emperor Gestahl was actually such a common misinterpretation that the FFXIV devs riffed on it in the design of one of the MMO's minions.

Final Fantasy VII Remake Part 2 is going to have to clarify what's going on with Bugenhagen's business end. There's simply no way around it. The most obvious reason is because the graphics on current- and next-gen consoles are just too damn good. I don't need to tell you how pretty and expressive the character designs are in FF7 Remake. (But I have!) But this is a detail that we're finally, finally going to get clarity on.

I predict, with no actual evidence, that the updated version of Bugenhagen is going to split the difference between classic Yoda and Baby Yoda. As you would expect from someone with the job title of "Elder," he's very old and walks gingerly in his house, perhaps with a stick. He has feet and legs, but he's 130, so they don't work so good.

In the original game, Bugey had a bunch of gadgets in his house, but we never really heard much about them. This time around, we need to get a better sense that he's a tinkerer, an inventor, a bit of a Doc Brown oddball. That would help to explain the Materia-powered hover-thing that he uses during his Lifestream chat. It's a bit like Baby Yoda's pod thing, but not something he uses all the time, just in short bursts.

Whether I'm right or completely off-base, it's going to be pretty darn interesting to see what they do with Bugenhagen in Part 2. Here's a little snippet from one of his most memorable scenes, if you want a refresher.