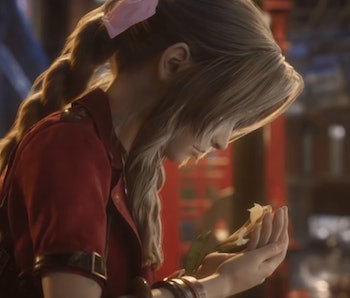 Final Fantasy VII Remake is a major 2020 Game of the Year contender, and a lot of that has to do with its bombshell ending, which casts uncertainty on everything we thought we knew about the journey of Cloud Strife and his companions. We already know the second game is in development, and there's a slim chance we might learn more about the FF7 Remake sequel during Square Enix's events at Tokyo Game Show at the end of September. In the meantime, though, a fascinating fan theory provides a remarkably plausible roadmap for where the story could go next. Let's dive in.

Spoilers for the original FF7 ahead.

Shortly after the release of FF7 Remake, redditor fkoffgimeoldred shared a lengthy post that uses the ending of the 1997 game to explain the story changes in the 2020 version. The original game begins and ends with an image of Aerith surrounded by glowing specks of Mako. This becomes the basis of a claim that all of FInal Fantasy VII was a vision shown to Aerith by the planet as she kneels by the leaky mako pipe by the Loveless theater in Sector 8.

"The plot of FF7OG, starting with the attack on the reactor, never actually happens," the redditor writes.

That means the 2020 game is essentially Aerith trying to prevent what she saw — namely, the events of the 1997 game. The original FF7 has a bittersweet ending — Sephiroth is defeated, the planet is saved, but humanity is wiped out. Some 500 years later, an older Red XIII and other members of his clan gaze down at the overgrown ruins of Midgar.

Aerith seems to be aware of things that haven't happened yet throughout FF7 Remake. There are even hints of this from Cloud's first encounter with her, though it really starts to become obvious around Chapter 12, as Cloud and his friends attempt to stop the Turks from dropping the metal plate onto the Sector 7 slums. She's strangely calm throughout the episode, confident they have more time to help residents escape, yet accepting that the party won't be able to stop it from falling. Later in the chapter, when she heads to Seventh Heaven to rescue Marlene, it's implied Aerith transfers some kind of foresight to Marlene when she embraces the crying girl. Marlene steps back from their hug with a stunned expression, and Aerith puts her finger to her lips.

Aerith knows what's coming for Cloud and the rest of their companions, and she's likely trying to change destiny by bringing about an outcome in which humanity is spared. She also shares some of her knowledge with Red in Hojo's lab. This becomes clear during the battle with the Whispers in Chapter 18, when the party sees a vision of an older Red running through a canyon — just like in the final moment of FF7's original ending. Barret asks, "what the hell did I just see?"

Red looks up at Aerith expectantly, and says this in response:

So, what does all this mean for the sequel to Final Fantasy VII Remake? Chapter 18 suggests that members of the party are starting to catch on that Aerith is aware of things she shouldn't be. In the original game, the party leaves Midgar and heads to the nearby town of Kalm for a bit, where Cloud explains his patchy memories of the past, and Tifa's unease with his version of events starts to clue players in that the former SOLDIER isn't a particularly reliable narrator.

If the party does indeed head to Kalm in the early hours of FF7 Remake Part 2, we can expect this section to play out very differently. Not only does the party have to contend with Wutai's involvement with Avalanche, the gang will likely to have some big questions for Aerith. She doesn't have the best poker face, and if Cloud and the others get wind that she's fated to die, you can bet they're going to be determined to protect her.

You can also bet Aerith is not going to allow herself to be treated like the damsel in distress. If Cloud and his friends attempt to keep her somewhere safe, she's going to rebel, likely putting herself in harm's way.

Will Aerith's selfless desire to put herself in harm's way for the good of her friends and the planet ensure her tragic fate remains the same? Or can Cloud's Remake re-do of the FF7 story result in a truly perfect ending? We'll have to wait for the sequel to find out.