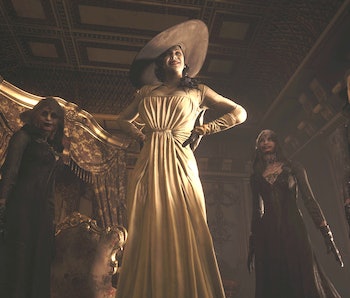 The bigger they are, the harder they fall. For many, Resident Evil Village is the latest title in a horror video game series, but for some frisky fans, it's home to gaming’s newest it girl. Lady Dimitrescu is a villain in the new game. She’s a statuesque grande dame who sports a spectacular hat and a murderous smirk.

Following Dimitrescu’s meteoric rise to stardom, we’ve discovered quite a bit about the character. She’s more than nine feet tall and has feet that are 44cm in length. How on Earth did that happen?

What does Lady Dimitrescu's name mean in Resident Evil 8?

Lady Dimitrescu's full name is Alcina Dimitrescu. Her last name has a Greek origin with a Slavic slant, roughly making her name mean "follower of Demeter." You might recognize the name from a past history or literature class: Demeter is the Greek goddess of fertility.

This is rather ironic, as Lady Dimitrescu is known to consume chaste women. The name “Demeter” is also immensely popular in Romania, the area associated with Vlad the Impaler, the historical figure associated with most Dracula legends.

The name Dimitrescu has roots in Romania, and the central region of Transylvania has long been associated with the fictional figure of Count Dracula. On his journey to England, Dracula traveled on a ship called Demeter. This could be a subtle way for the Resident Evil Village writers to deepen Lady D's associations with the notorious fictional vampire.

Lady Dimitrescu's first name Alcina is also of European origin, specifically Italy. The name was likely chosen to tie the character to an opera of the same name by George Frideric Handel. The character is a seductive sorceress, similar to Circe from The Odyssey. In the opera, Alcina lured a knight in using her magic and feminine wiles.

Lady Dimitrescu has even more in common with Dracula — her three "daughters" are analogous to Dracula's three live-in brides. Both kidnapped and consumed others to maintain their youth.

Resident Evil Village's daunting dame also invites comparisons to another towering lady: Hachishakusama. This figure from Japanese folklore is an eight-foot-tall woman who wears a white dress and a floppy white hat. Hachishakusama usually consumes children that are between 9 and 11 years old. She lures them by repeating the interjection of "Po" in a deep, masculine voice. Her process for capturing a single child takes anywhere from a few days to multiple months.

How was Lady Dimitrescu designed in Resident Evil 8?

According to Resident Evil Village art director Tomonori Takano, Lady Dimitrescu was created while chasing an air of extravagance. In an interview with IGN, Takano described the vampire’s creation.

“We reused the character model of Mia from Resident Evil 7 and made her wear a dress and hat,” said Takano.

After not being properly frightened by the character, Takano, decided to make her even larger.

“I drew a piece of concept art in which she stoops down to get through a doorway. That’s when I felt that this was going to work out,” said Takano.

How tall is Lady Dimitrescu in Resident Evil 8?

According to a tweet from the official Resident Evil account, Lady Dimitrescu is 2.9 meters tall, which is approximately 9'6". This figure includes both her heels and floppy wide-brimmed hat.

This makes Lady Dimitrescu taller than quite a few other vertically exceptional pop culture icons. Here's how she compares.

These heights mean that Lady Dimitrescu can easily step on every popular villain from pop culture history.

How old is Lady Dimitrescu in Resident Evil 8?

We don't know Lady Dimitrescu 's exact age. From the Maiden demo, we do know that she's been active as the house's mistress since at least the 1950s. Assuming Lady Dimitrescu was a fully grown adult at that time, she's likely upwards of 90 years old.

Can I see Lady Dimitrescu as a puppet?

Ahead of Resident Evil Village’s debut, the development team for the game heard a criticism that the game might be “too scary.” In response, the official Japanese YouTube channel debuted a series of videos where the villains were transformed into puppets and enjoyed hijinks.

If that isn’t your bag, here’s Lady Dimitrescu as a puppet.

How does Lady Dimitrescu fit into the Resident Evil 8 story?

Lady Dimitrescu is a mutated human that has become one of the four lords in the Romanian village where Resident Evil Village takes place. Each one rules over a section of land.

She gained her extraordinary height and abilities after having a Cadou parasite into her body. The parasite gave Lady Dimitrescu all the superhuman traits that you see in Village.

Lady Dimitrescu would go on to aid Mother Miranda in further researching the Cadou.

During the abduction of Ethan’s daughter, Rosemary, Lady Dimitrescu was entrusted with protecting the baby, making her a natural foe for Ethan. Their conflict finally came to an end once Ethan aggressively shot at Lady Dimitrescu’s mutated form, killing her.

Maybe. According to an interview between Digital Trends and the game’s director, Morimasa Sato, the lady of the house could return.

“The feedback to Lady Dimitrescu has been overwhelmingly positive, and we take the community’s feedback to heart. We never rule anything out in the world of Resident Evil,” says Sato.

That doesn’t quite suggest she’ll return for Resident Evil 9, but she could certainly make a comeback down the line.