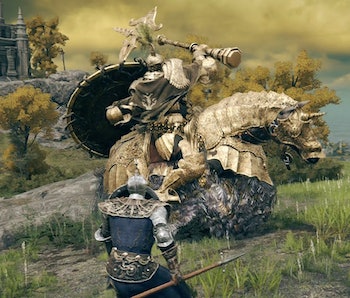 Right after you leave the starting area in Elden Ring, you’ll likely come across the game’s first optional boss known as the Tree Sentinel. This is a heavily armored warrior atop a massive horse, who can follow you around and take you out in one fell swoop. While this boss is certainly challenging, especially at first, there are several methods that can make it a cakewalk, including a cheese strategy. Here’s how to defeat the Tree Sentinel boss in Elden Ring.

How to prepare for the Tree Sentinel fight

That’s why it’s recommended to come back to this battle when you’re stronger and have more flasks available, and better weapons. Some players might opt to utilize a horse for this fight, as well, though it’s not totally necessary.

Aside from that, having spirits to summon during the fight can help out a lot, especially since they can serve as a distraction while you get in a few hits.

How to defeat the Tree Sentinel

There are a few different strategies for taking down the Tree Sentinel, but one of the most common is to stick behind him, get a few strikes in, back away, and then repeat the process. Depending on your stats and build, this method might take a while, which can be daunting if you aren’t patient. You can also use a shield to deflect an attack and follow it up with a strike of your own. This can be tricky since blocking depletes so much stamina, so your mileage may vary.

Another strategy you can use is to hit the Tree Sentinel from behind a few times while he isn’t alert, then run away to get him to stop chasing you. Then sneak up and get in a few more attacks and repeat the process.

If you’re really skilled, you can pull off a parry on the Tree Sentinel, which is effective, but hard to execute. Ultimately, you’ll likely find some combination of the aforementioned strategies that will eventually work for you.

However, there’s another method that makes this battle easy.

How to beat the Tree Sentinel with a cheat

The easiest (and cheesiest) way to take down this boss is to stay on top of a structure where he can’t get to you while you hit him with projectiles. Magic projectiles work best, but bows and other throwables can get the job done.

Right next to the Tree Sentinel’s starting position is a large dilapidated structure you can get on top of. You need to use your horse to jump up on the corner, but once you’re up there, you’re relatively safe. From here, simply fire away with whatever projectiles you have to continuously deal damage. Keep in mind, you can still get hit by the boss, so make sure you use your shield when you get close so you don’t take damage. Then back away after your attack connects so you avoid his sweeps.

In addition, watch out for the Tree Sentinel’s magic counter, wherein he’ll absorb any incantations thrown at him and fire them back. This is telegraphed by a gold, glowing shield that appears just before you strike.

The other point is that this boss can actually get up onto the structure sometimes, but if you stay away from the corner you used to get on top, he’ll have a much harder time getting to you. If he does manage to scale the structure, just run away, and he’ll follow you off. Then hop back up and continue the process.