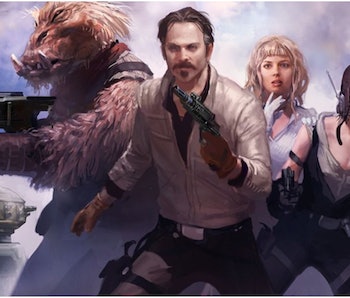 EA's canceled Star Wars game, known by its unofficial moniker Project Ragtag, has become something of a white whale for industry watchers and Jedi-lovers alike. It seemed like a sure-fire winner: a single-player adventure set in a galaxy far, far away, helmed by Amy Hennig, the creative mastermind behind Sony's smash-hit Uncharted and Jak and Daxter franchises. Though the game went into development in 2013, EA canceled the project in 2017 and shuttered the studio developing it, citing dwindling interest in single-player games (nobody tell Jedi: Fallen Order). Clone Wars and Rebels producer Kevin Kiner tells Inverse about his experience working on the years-long project, which he described as some of the best Star Wars work he'd ever done.

Kiner says he worked on Ragtag for EA and Visceral games for "a couple of years," and wrote a substantial amount of music for the game that he cannot use for future Star Wars projects.

"They spent a tremendous amount of money on that," Kiner says. "I got to work with Amy Hennig, who did Uncharted. I was really honored she hired me. We went to Nashville and recorded with a great orchestra there, about an hour's worth of music. Then they shut the game down. Not because of the music!"

Elsewhere in our recent conversation about the series finale of The Clone Wars, Kiner explained that orchestral composition takes a whole lot of time, with even a successful day's work yielding only a couple of minutes of music. His comments corroborate contemporary reports and interviews suggesting Project Ragtag was quite far down the road of development when EA decided to spike it and close Visceral.

There were a couple of themes that I really consider some of the best things we've ever written for Star Wars. Now they are literally stuck in a vault someplace and will never ever be used. I told a friend, it’s like if John and Paul and George and Ringo just finished mixing “Yesterday” and somebody takes the tape and says, “right boys, that's all there is” and sticks it down in the basement forever.

The cancellation was tough on Kiner as both as a composer and a die-hard Star Wars fan.

"It’s a heartbreaker because there's some really good scenes that are never going to see the light of day," he explained. "I was really, really depressed for six months or so after that."

The "Project Ragtag" cancellation is among the most notorious examples of EA's uncanny knack for provoking a backlash among the gaming community. In an October 2017 blog post announcing the cancellation, EA executive vice president Patrick Söderlund said, "In its current form, [Project Ragtag] was shaping up to be a story-based, linear adventure game [...] It has become clear that to deliver an experience that players will want to come back to and enjoy for a long time to come, we needed to pivot the design."

The incident caused quite a kerfuffle among fans and the games press at the time, and EA couldn't have gotten it more wrong. Many of the biggest console games of 2017 and 2018 were narrative-driven stories with robust single-player experiences, including God of War, Spider-Man, Red Dead 2, Breath of the Wild, and Persona 5.

In April 2019, Hennig told Eurogamer, " I don't know why the change of heart happened, because that was very clearly not an acceptable plan when we were working on Ragtag! I'm glad for Respawn's sake, because I'm excited about their game, and I've heard great things about it."

While EA and Hennig have long since moved on, Kiner's comments are a bittersweet reminder of what could have come from this promising collaboration in the Star Wars universe.