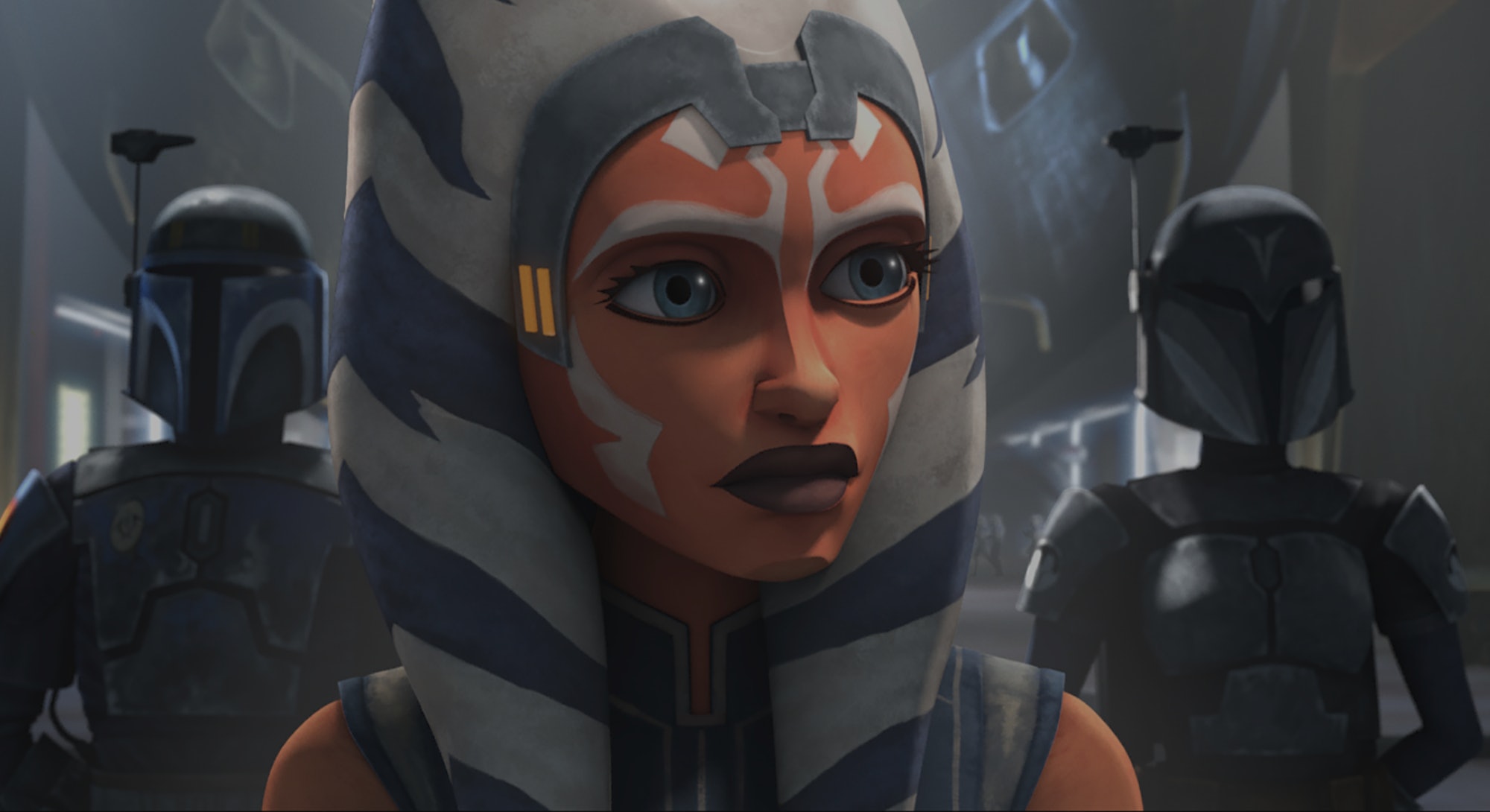 That’s more than John Williams, and quite possibly a record that will never be equalled. So it’s fair to say Kiner understands Star Wars in a way only a rare few can match. In addition to scoring the entirety of Clone Wars and Rebels, the Southern California native has crafted music for dozens of movies and shows, including Narcos: Mexico, Making a Murderer, Doom Patrol, CSI: Miami, and Star Trek: Enterprise.

But his greatest challenge may have been convincing George Lucas to keep rap music out of the 2008 Clone Wars feature film.

“He would throw me a CD and say, “my son's listening to this, see if you can use something like this” and it was like a rap tune or hip-hop thing,” Kiner tells Inverse. “That was really challenging and sometimes it didn't work. George was the kind of guy who would push and push to make it different.”

Clearly, Kiner won that debate, and we’re probably better off for it.

With Clone Wars winding down it’s unclear when Kiner might return to this galaxy far, far away. He says he’d love to do more Star Wars in the future, but if he has any firm plans he’s not sharing them just yet.

Ahead of the finale of The Clone Wars Season 7, Inverse spoke with Kiner about his odd path to becoming a composer, his decade-spanning work with Dave Filoni, and George Lucas’s quest to bring hip-hop to Jabba’s Palace.

Clone Wars Season 7 started off by introducing us to the Bad Batch, a group of irregular clones used for special ops missions. What was your approach to composing their theme?

That was co-written with my son, Sean. He had quite a lot to do with that melody. Dave Filoni’s direction for that was kind of a Dirty Dozen caper. It has a bit of a militaristic feel, and there’s a heroic element to it, yet they’re dark heroes, definitely a band of misfits.

Ahsoka is one of the most beloved characters in Star Wars and a creation of The Clone Wars. What story were you trying to tell with her theme?

When we first see her, she's sitting on her bunk and it's kind of a dark place. I wanted a little bit of softness to it. She was young at the time, just a girl. Yet I also wanted there to be a strength there. There are aspects of music I wrote for Ashoka that are playful, and there are aspects that are very strong and grand.

There's a track from the 2008 feature film called “General Loathsom – Ashoka.” There are two of her themes – one’s at 12 seconds in, another’s at 1:16. When we did Season 7 of Clone Wars, I ended up going back and seeing that those were kind of underutilized, so I use them more here [in Season 7] than in other seasons. The main theme I probably overused a little bit during Clone Wars.

Clone Wars Season 6 aired in early 2014. How did that long gap shape your creative choices heading in to Season 7?

I had to go back and study my own scores because I’d sort of forgotten them. I spent a couple days listening to my old stuff and capturing some snippets to refer back to. It was like an old friend that I had hung out with for quite some time.

It was very cool to be able to go back to the “Clones Theme.” It’s one of my favorite things I've ever done. It’s not quite as melodic as Ahsoka’s or Satine’s theme. Without being too technical, it's a fairly sophisticated piece of music and it moves in a counterintuitive way. It was a pleasant surprise to remember, hey, I wrote that!

I've written over 100 hours of Star Wars music. So it's more than anyone, and very possibly more than any one ever will. There's a great Simpsons episode where whenever Homer learned something new, his brain pushes something else out. I'm pretty close to that with Star Wars.

Can you tell us about the last thing we will hear in Clone Wars?

The very last thing you will hear is not the main theme. I don't know if I can say that, but I just did. I think that's fine…?

In Season 7, we don't always use the theme to open or close the show, depending on the drama. If something happens at the end of an episode that's dark or desolate, we might not come back in with a big fanfare. Dave Filoni had a lot to do with choosing when we do that.

You were pre-med at UCLA before becoming a composer. What attracted you to medicine in the first place, and what prompted your career shift?

The only thing that drew me to medicine was my mom told me I couldn't be a musician. I had a pretty high GPA, but I dropped out after fall quarter of senior year. I got a Vegas gig for a Supremes-style group the summer before that. Then their music director and conductor got a better gig, so the manager asked me if I'd ever conducted. I lied and said, “Oh, yeah, all the time.”

Then he said, “We're going to Indonesia for a New Year's Eve thing and you can conduct the group.” I have no idea why he didn't audition me or anything. Maybe I played good guitar and he thought I was a solid dude. But he had an eye-opening experience when we got to Indonesia, because he could see I couldn't conduct at all. So I just kind of learned on the job.

Can you take us through the process of beginning a new project?

The best showrunners – and I put Dave Filoni in this classification – don't try to talk musically too much. They talk more about what's happening in the story, what they're looking for emotionally, or tempo-wise. Sometimes the showrunner has chosen a soundtrack – temp tracks are a great starting-off point. When we started Rebels, Dave Filoni wanted to go back to the New Hope kind of template. It allows the showrunner a way of talking about music because it's really hard for somebody who's not musical to talk about music. It's hard for me to talk about music!

What is it about Star Wars that keeps inspiring you?

I was a big, big fan of the movies and of John Williams. I have a [New Hope] score from the early 80s that’s all dog-eared and marked up from me studying it. I've written all kinds of little things in there that give me an idea of what he was trying to accomplish, or how he was making a certain sound. When I heard John Williams's first scores for things like E.T. and Star Wars and Superman and Indiana Jones, I knew that's what I wanted to do. He's definitely the most brilliant guy on the planet and has been for the last 50 years.

Dave Filoni and George Lucas have spoken at length about the influence of Japanese film on Star Wars. Did you pull from any of that in your compositions?

That comes up quite a lot. George and Dave are both huge fans of Kurosawa and Miyazaki, particularly Princess Mononoke. It's really nice to listen to those guys and incorporate a bit of that flavor.

Was there anything that surprised you about working with George Lucas on Star Wars?

The most surprising element of working with George Lucas was his need to expand the drama into something that nobody's ever seen before. He was always pushing me to do something that was innovative and not what you would normally hear. I remember we were doing Jabba’s Palace for the Clone Wars feature, and he said, “that should be Japanese,” and I’m like “that's a cool idea.”

There were other times when he would throw me a CD and say, “my son's listening to this, see if you can use something like it” and it was a rap tune, or hip-hop thing. That was really challenging and sometimes it didn't work. George was the kind of guy who would push and push to make it different.

Try to use hip-hop – I mean, I had to do that, but I was pretty sure it wasn't gonna work. He made us try it but he was smart enough to know that it really wasn't working. When he asked me what I thought, I had to finally say, “Well, I think it kind of makes us like Power Rangers. I don't think we want to do that.” He just nodded and that was that.

What was cool about it was he was always pushing, not wanting to do what's already been done. That's why he made Star Wars: to do something that had never been done before. He succeeded mightily. It’s the greatest, most widespread and widely-known myth in the history of humanity.

The Clone Wars series finale airs May 4 on on Disney+.