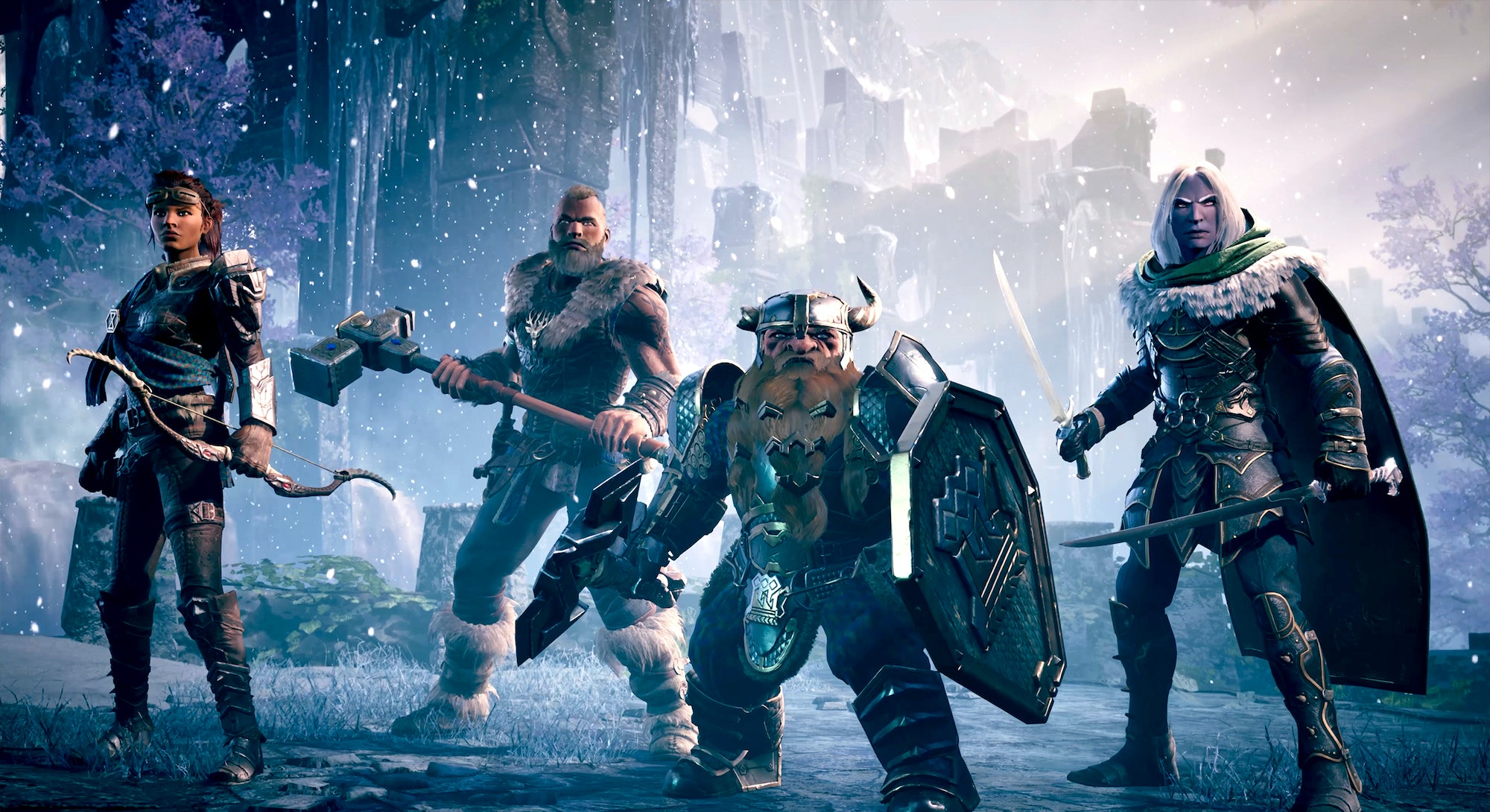 I gasped when a giant Verbeeg chef hacked a dwarf’s body into pieces while singing a song, and then tossed the bits into an enormous pot.

“Now you got yourself a stew going,” I said nervously to break the tension. A polite chuckle drifted through the team chat from DrLupo, the popular streaming personality who was in my party for a preview of Dark Alliance. (I don’t think he, the developer, or the other journalist in our group caught the Arrested Development reference, but I have no regrets.)

Even if the brutality was lacking in actual gore, the tone of the sequence is pretty gnarly for the often tame Dungeons & Dragons. There was little to no blood, but still.

Playing as popular D&D heroes Drizzt Do'Urden, Bruenor Battlehammer, Catti-brie, and Wulfgar, we pummeled the chef with all our best attacks. We’d all saved up our ultimate abilities for the boss fight. And we burned through his sizable HP bar ludicrously fast. The fast-paced Drizzt wields two swords in battle. Catti-brie is the team’s archer. Wulfgar is the hulking barbarian with a massive warhammer. And the dwarf Bruenor is a compact and defense-focused unit. Together, their attacks easily overwhelmed the trollish chef.

“I have never seen any group kill him that quickly ... ever,” one of the developers said, sounding almost nervous. Granted, it’s the equivalent of a band’s frontman saying the current concert is the best of the entire tour. A certain kind of showmanship is expected. Yet, the experience still felt like an awesome power trip that left me excited to play Dark Alliance with my D&D buddies when it launches later this month.

As an online — and eventually couch co-op — multiplayer experience, Dark Alliance taps into something primal and kinetic that clicks, like if Outriders had gone cheeky high fantasy rather than edgelord sci-fi. There’s a reason why the powers that be put Outriders on Xbox Game Pass on Day One — once players are given a free taste, it can quickly become an obsession. Like Outriders, there’s no doubt that Dark Alliance might’ve struggled more with a traditional release, even at the $39.99 price tag, but it is the perfect game to find an audience on the Xbox Game Pass platform.

Subscribers have absolutely nothing to lose by trying it out, and what they’ll find is a breezy dungeon-crawler with a satisfying loot grind that’s a blast to play with friends.

Here’s DrLupo having a blast with new friends that include yours truly.

The combat seems simple at first, but there’s a deceptive amount of nuance. You can get by mashing the light and heavy attack button, triggering abilities once the cooldowns finish. But much of the complexity lies in unlocking the dozens of moves for each character and memorizing the button-press sequences to execute their awesome powers. While it doesn’t feel quite as polished as something from Sony’s Santa Monica Studios, Dark Alliance definitely evokes God of War in this respect.

That’s married with the loot grinder gameplay loop that feels more like Destiny or Outriders than it does Diablo or Torchlight. Storytelling and production value are a touch more compelling than you might expect, with sharp adult humor that matches the occasionally grisly tone. Light spoilers here, but when you knock the Verbeeg chef into the lava below to a fiery death, he spends his last moments bitterly giving you the middle finger. That kind of irreverence is all over Dark Alliance, for better or worse.

Loot drops randomly from enemies and treasure chests of varying rarity, and it isn’t until you return to base camp and exchange them at a magical treasure chest that you see what you’ve gotten. The approach feels like if you only got Engrams in Destiny. But while it’s tempting to want new weapons and armor in the middle of a mission, the pace when you’re on the field is often relentless. With the exception of short platforming or puzzle-solving sections, most missions are heavy on the combat.

At times you might feel like you’re drowning in enemies, but screaming for help and standing back-to-back with your buddies as you mow down hordes is undeniably awesome.

By making players wait to collect loot until after you’ve slain all your enemies, you’ll never have party members absentmindedly messing around in their inventory while their comrades launch into the next fight Leeroy Jenkins-style. But it also means full squads might have to spend a good chunk of time in between missions sorting through inventory and re-specing their loadouts.

But that’s the whole point of a game like this, isn’t it? Some of the most fun to be had in Destiny is in goofing around with your fellow Guardians at the Tower comparing gear or in dancing around in between Raid encounters while somebody takes a bathroom break. Dark Alliance has those sorts of experiences in spades. Though the story and role-playing have felt a touch thin in previews, they’re rooted in the D&D books written by R.A. Salvatore, so it’s likely that the final product will offer more depth. Even if it doesn’t, the combat and co-op are the focus here. And both are pretty solid with plenty of room to grow.

All things considered, Dark Alliance will be a must-try when it hits Xbox Game Pass on June 22, 2021, especially when Smart Delivery means a free upgrade for Xbox Series X|S players. An ongoing post-launch roadmap also includes a new magic-based character and the ambitious couch co-op feature that will allow up to four players to do splitscreen locally.

For any other game, that would feel like a blast from the past. But for Dark Alliance, it’s perfect.