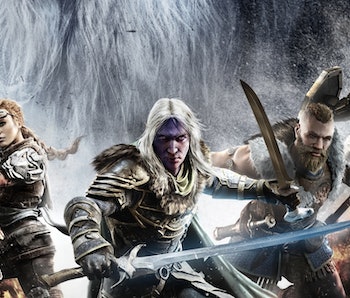 Dungeons & Dragons has inspired an array video games from the Diablo series to Baldur’s Gate and Divinity: Original Sin, but D&D publisher Wizards of the Coast is making its own official game called Dark Alliance. Announced at the 2019 Game Awards with a visceral teaser trailer, Dark Alliance won’t feel anything like a casual game of Dungeons and Dragons. It’s a visceral, cinematic experience equal parts frenzied, bloody, and intimate.

“Our game is a real-time action game,” lead game designer Derek Elliot tells Inverse, “whereas a tabletop RPG is turn-based.”

It feels a bit like The Witcher meets Left 4 Dead, blending high-fantasy elements with violent horror. Think God of War, Shadow of Mordor, or maybe even Dark Souls.

We know what you’re thinking, but before you throw a handful of cash at Wizards, here’s everything you need to know about Dark Alliance, from plot and gameplay details and when the release date might actually arrive.

What is Dark Alliance?

Billed as a “spiritual successor” to the hack-and-slash Baldur’s Gate: Dark Alliance games from the early 2000s that featured characters created by famed fantasy author R.A. Salvatore, the new Dark Alliance seems to aim more for action than it does the strategic elements of D&D. Nathan Stewart, Head of Franchise for Dungeons & Dragons, describes it as a “visceral experience” in an official press release. Unlike the ubiquitous top-down perspective common to other fantasy games like Diablo, Baldur’s Gate, or Divinity: Original Sin, it’ll be a “third-person action RPG.”

We learned back in March 2019 that Tuque Games was developing a new AAA title based on Dungeons & Dragons lore in March 2019, but it became an unprecedented project when Wizards acquired Tuque in October, making this the first-ever D&D game developed directly under Wizards’ umbrella.

Wizards of the Coast first teased the reveal in December 2019 in a tweet directed at Tuque Games from the official Dungeons & Dragons account. “Hey, @TuqueGames,” it reads, “See you @thegameawards.”

What’s the plot and setting of Dark Alliance?

Dark Alliance takes place in the popular Forgotten Realms campaign setting for Dungeons & Dragons, the same world where players can adventure in famous cities like Baldur’s Gate, Neverwinter, and Waterdeep in various D&D campaigns. However, this story is set in Icewind Dale like 2020's Rime of the Frostmaiden sourcebook.

“We’re taking players on an epic journey through the harsh and violent Icewind Dale,” Jeff Hattem, VP Digital Development for Tuque Games, said in an official press release. “They’re going to need to use their wits, their weapons, and their party members to help them survive the iconic monsters we’re going to send their way.”

Drizzt Do’Urden, the famed drow Ranger created by R.A. Salvatore, is the party leader for this adventure. He’s joined by companions Catti-Brie, Bruenor Battlehammer, or Wulfgar. Each represents a different action-oriented archetype: Drizzt dual-wields swords, Cattie-Brie uses a bow, Bruenor has a battleaxe, and Wulfgar a warhammer.

“We’re greatly inspired by the classes from the game,” Elliot tells Inverse. “The four playable characters are true to the way they were written by R.A. Salvatore.”

“From a timeline perspective, we’re set quite far in the past as opposed to where the current timeline is in D&D,” Elliot says. “The overarching narrative drives the game’s premise: the four Companions of the Hall need to rise up to the challenge.”

Elliot also promises that the icy tundra of Icewind Dale will feature “frost giants, knolls, goblins, and a lot more.”

When is the Dark Alliance release date?

There’s no specific release date on the books just yet, but a credible source has confirmed to Inverse that the game will be released at some point in 2021. This information was also confirmed in a December 2020 press release from Koch Media that the company would handle the sole "physical publishing activities."

So the wait shouldn't be too much longer.

What platforms and consoles will Dark Alliance release on?

The official word is that Dark Alliance will be released on “PC and consoles,” which probably just means PlayStation 4 and Xbox One, at least initially. But it'll obviously be playable on next-gen consoles as well.

Games like Divinity: Original Sin II utilize a slower turn-based system that allows the player to make strategic selections in the midst of combat.

According to a press release, Dark Alliance “combines the pulse-pounding action of a hack-and-slash dungeon crawler with the progression and loot systems of a role-playing game, all from a third-person perspective. In theory, it should feel much faster than a Dragon Age game.”

Dark Alliance will also support local and online co-operative play for up to four players.

“The game is structured with a non-linear story,” Elliot says. “You can unlock different quests at different times and choose your own pace.”

Beyond that, specifics are sparse so far, but Dark Alliance should feel more nuanced than a direct hack-and-slash series of procedural levels.

“One thing we’re doing that’s a bit different is that each quest has a hero character or showcases a particular monster,” Elliot says. “We try to really shine a light on that in each mission.”

Dark Alliance will launch worldwide on PC and consoles sometime in 2021.