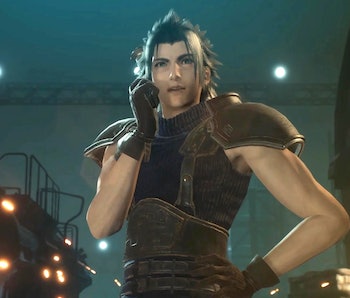 When is the Crisis Core: FF7 Reunion release window?

At the moment Crisis Core Reunion is scheduled for a winter 2022 release, although we don’t have a firm date.

That will most likely mean December, but there’s always a possibility the game could be delayed, especially if Square Enix foresees the need to delay Final Fantasy 7 Rebirth. Crisis Core is clearly meant to be a stopgap between Remake and Rebirth, so Square Enix won’t want too much time in between the two.

What are the Crisis Core: FF7 Reunion platforms?

Crisis Core Reunion is actually coming to nearly every modern platform, with a release planned for PS5, PS5, Xbox One, Xbox Series X|S, PC, and even Nintendo Switch.

Is there a Crisis Core: FF7 Reunion trailer?

Yes, Square Enix has currently released one trailer for Crisis Core Reunion, which gives a lengthy look at the graphical upgrades. Anyone that’s played Crisis Core will know that there are essentially two different time periods in the game, and this first trailer shows off that first period, and Zack’s first look, almost entirely.

The most obvious change for Crisis Core Reunion is the massive graphical overhaul, which practically makes it look like a new game. Crisis Core was first released on the PSP in 2007, and while it’s not a bad-looking game it was certainly restricted by the platform.

There are also a handful of other changes being made to the game, updating it for modern audiences and putting it more in line with Final Fantasy 7 Remake. The entire game is now voiced, and voice lines have been re-recorded using the actors featured in Remake. According to Square Enix, much of the BGM has also been given new arrangements by the original composer, Takeharu Ishimoto.

According to a press release from Square Enix there will be a variety of gameplay tweaks, although the core combat will remain largely the same. The biggest update is that “camera and character movements have been vastly improved,” but it also seems like the UI will be updated and skip options added.

Past all those changes it doesn’t appear that Crisis Core Reunion has any “new” content, although at this time Square Enix hasn’t flat out denied there will be new content.

Crisis Core takes place seven years before the events of FF7 when Sephiroth was still a member of SOLDIER. The main character of the game is Zack Fair, a headstrong young SOLDIER candidate who’s dispatched to the frontlines of the Shinra-Wutai war. Crisis Core gives more insight into the events that lead up to FF7, along with the past of Sephiroth, Cloud, Tifa, and Aerith.

There are a handful of new characters introduced as well, like Sephiroth’s closest friends and other first-class SOLDIERs, Genesis and Angeal. Since the game’s release, Zack has become a massive fan-favorite character and has even been featured in other games like World of Final Fantasy and Kingdom Hearts: Birth By Sleep.