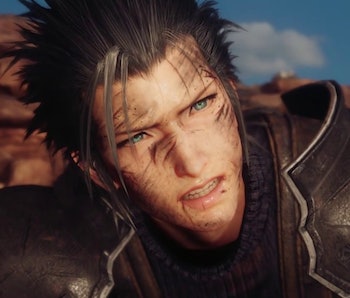 Ever since the trailers for Final Fantasy VII Remake showed off new Dementor-like creatures, we all knew the game would depart from the original in some surprising ways. But one of the most controversial aspects of the game's ending involves Cloud's old SOLDIER pal, Zack Fair.

What's going on with Zack? The game's developers just confirmed your wildest suspicions.

The presence of the Whispers makes it seem like FF7 Remake takes place in an alternate timeline or reality from the start, with the entities Red XIII describes as the "Arbiters of Fate" influencing events to make sure things stay on course. After the players destroy the Whisper Harbinger in FF7 Remake's final battles, the Remake series no longer has to comply with the rigid plot beats established by the original game.

This climactic battle sends a shockwave across space-time that alters a major event five years in the past: when Zack is killed by a legion of Shinra troops. Now, the game's developers have confirmed that Zack definitely lives. This change will have a huge impact on Final Fantasy VII Remake Part 2 and future installments.

"We wanted to have the last boss fight take place at the highway in Midgar, which arises questions that I cannot answer," Game Director Tetsuya Nomura said in an interview featured in Final Fantasy VII Remake Ultimania. "There is a character who’s alive, which leads to a great mystery." This particular quote makes it seem like that battle had to happen on the outskirts of Midgar for some reason, and that reason is linked to "a character who's alive." Other tidbits from Ultimania claim he went missing five years ago, and he's referred to in both the past and present tense, further implying that he's MIA instead of KIA.

As Cloud and company begin their final confrontation against the Arbiters of Fate late in FF7 Remake, we also see Zack in the past — with Whispers swirling around Midgar — begin battling a legion of Shinra cadets. In the timeline of the original and the spin-off Crisis Core, this leads to Zack's death on the city's outskirts. Cloud, suffering from a psychic break, picks up the Buster Sword and takes on Zack's memories as his own.

After the FF7 Remake party destroys the Whisper Harbinger, it sends a literal shockwave through various points in time, centered around Midgar. We see the shockwave knock Zack off his feet in the game's final moments, and he then walks by carrying this alternate version of Cloud. In the present, Cloud and Aerith walk by to continue their FF7 Remake journey. Aerith clearly senses the other pair, Zack gives her a look that borders on recognition, while our Cloud strides boldly forward. The other version of Cloud, weakly leaning on Zack, seems not to notice.

It's not totally clear yet how Cloud, Aerith, Barret, and Tifa's actions shaped the past, but there are some hints in the Zack scenes that this may not be the past, but an alternate present.

"In the Remake, Zack defeats the Shinra cadets and lives on, which leads to an unforeseen development," one fan translation of an unknown Square Enix developer from Ultimania reads. "In order to make sure that the two Clouds do not recognize each other's existence, it is assumed that they should not exist in the same time and space."

"When Zack is victorious against Shinra in this scene, a picture of the dog Stamp also flies into view," that same translation reads, "but this version of Stamp contradicts the previous designs seen in the game. What could this possibly mean...?"

Stamp is a dog cartoon used by Shinra for propaganda purposes. Barret talks about Stamp on several occasions in FF7 Remake. He can be seen in advertisements and graffiti in the train tunnels of Midgar. But the breed of dog is totally different on an empty bag of snacks that blows by the camera in Zack's scene. It's possible that Shinra rebranded the pooch in the five years between these events, but the developers' comments in Ultimania seem to suggest otherwise.

Stamp never appeared in the original FF7, or the Zack-centered spinoff, Crisis Core. (However, Zack's nickname in that game is "Puppy." When Barret calls Cloud Stamp as an insult early on in FF7 Remake, Cloud is triggered and winces, perhaps to suggest his fake memories are being challenged.

So what timeline are we looking at here?

Let's call the original game FF7A, and FF7 Remake is FF7B. This Zack might exist in a third FF7C reality that's not associated with any titles in the FF7 Compilation. A more interesting explanation would be that these events are happening in FF7A, the original timeline. FF7 Remake is all about breaking free from the constraints of the first game's legacy, so what better way to dramatize that than by changing one of its most important historical events?

If Zack were to live in the original game, this version of Cloud may never absorb Zack's memories. It's possible he'd never show up in Midgar or join Avalanche at all. Would Cloud ever reconnect with Tifa in Sector 7? Could Zack then become the protagonist of FF7A? Do they both share the spotlight? The prospect of having two superpowered sword bois in your party does sound pretty enticing, and it could have a profound impact on the already overcomplicated love triangles, especially after Crisis Core makes clear that Aerith and Zack are basically soul mates.

What does the world of Final Fantasy VII look like with Zack still in it? That's the biggest cliffhanger of FF7 Remake's ending.

Answering that question will be a focus of later installments of the remake, while the rest of the group pursues Sephiroth across the continent, no longer bound by the events of the original game. We could see Part 2 shift back and forth between these two realities each chapter, and maybe some kind of sci-fi shenanigans will allow these timelines to merge or for Zack to migrate over. The possibilities are endless.