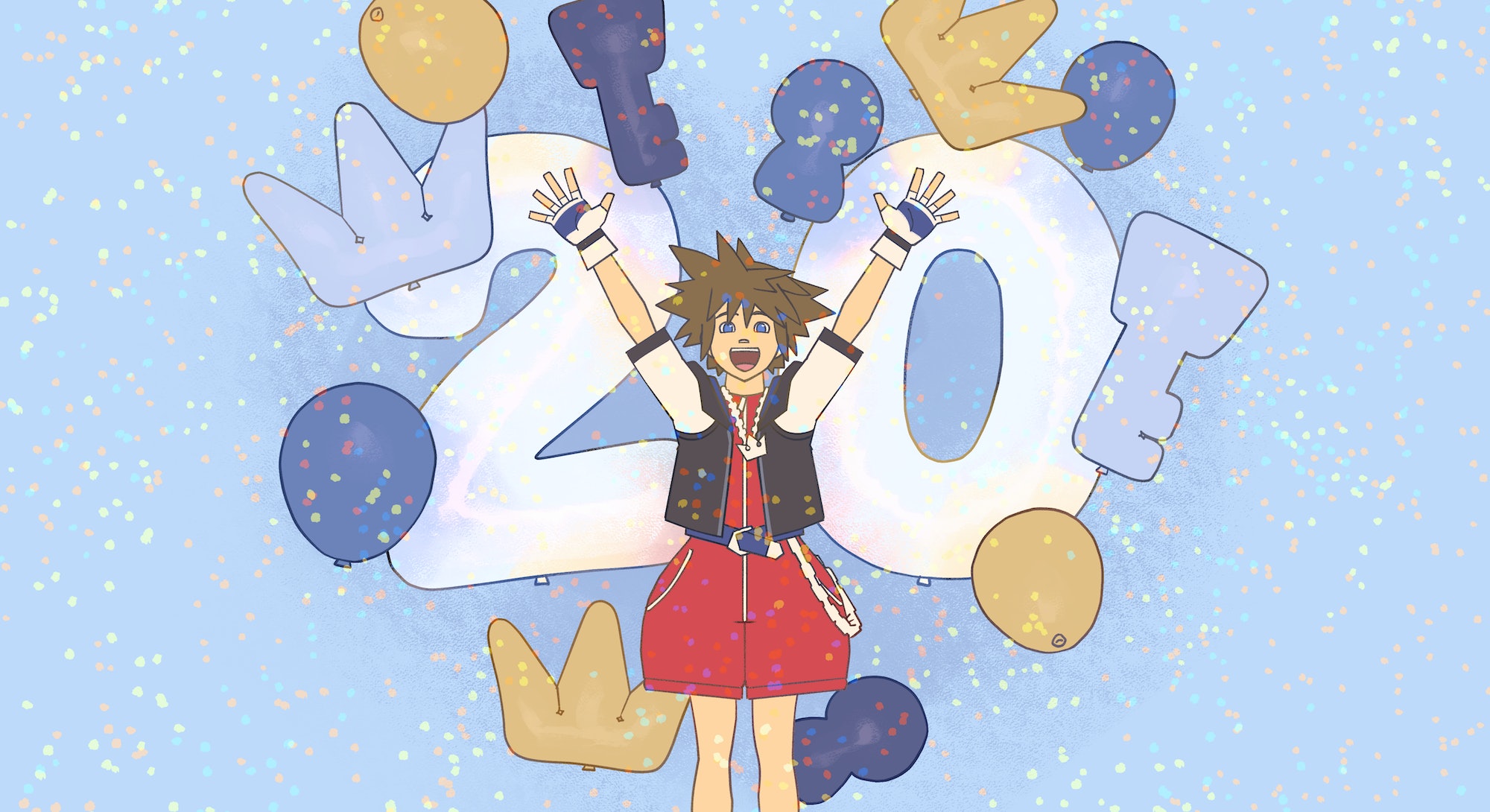 Twenty years ago, one of the strangest crossovers in history changed video games forever.

Kingdom Hearts is a fever-dream fusion of Disney and Final Fantasy that not only shaped the games industry, but the lives, hearts, and minds of its dedicated fanbase. First released for PlayStation 2 in March 2002, the fantasy role-playing game sees players take on the role of a boy named Sora, who is “chosen” by a weapon called the Keyblade. With the help of Disney icons Donald and Goofy, Sora travels to various worlds inspired by modern animated classics like Aladdin and The Nightmare Before Christmas. With their help, he challenges the Heartless, dark beings intent on stealing the hearts of every living person.

To mark the game’s 20th anniversary, Inverse spoke to some of these fans about what the series has meant to them over the years.

The power of friendship

Kingdom Hearts' main story has a reputation for being ever-so-slightly convoluted, but underneath all that exposition are universal themes anyone can relate to — the importance of love, friendship, and acceptance. The people we spoke to say the series has been the foundation for long-lasting friendships and even opened up doors to new ones.

A Reddit user named MrKnight36 tells Inverse, “I joined a Kingdom Hearts forum and joined a group writing a fanfic roleplay based on incredibly incorrect guesses as to what was coming next. A decade-plus later, I’m still writing and friends with that group from all over the country, albeit we've moved on from Kingdom Hearts fanfics. Definitely some of my closest friends!”

Mary Stowe, who works as a Social Media Manager for Destructoid, also says the series was a jumping off point for meaningful friendships. “The series is one I still revisit frequently, have made many friends through (we share SO MANY memes with each other), I even named my cat Kairi. Although she looks more like a Heartless since she’s all black with yellow eyes.”

Fanfiction has been a huge part of the Kingdom Hearts community all along, in part because the series predated the widespread adoption of social media platforms. Browsing the archives on FanFiction.net shows over 57,000 entries for Kingdom Hearts. That fanfiction served as practice for a lot of budding writers, including a Reddit user named Yamureska, who’s also an amateur screenwriter.

“From about 2007 to 2012, I was really into Kingdom Hearts. Not just the games, but the fan culture. I would read fanfiction about it every now and then, and I was inspired to make my own. That served as practice for when I started screenwriting in 2018,” says Yamureska. “KH's female protagonists and characters inspired me to write scripts with women as the leads.”

Rising to the challenge

Bonding with people over a mutual love of a game is one thing, but Kingdom Hearts has also served as a comforting escape for people facing challenging circumstances and difficult life transitions.

“I was 13 years old, had just transferred to a new high school, and knew nobody. I was a bit of an outcast. However, I was a huge gamer and Disney fan and found a lot of my loneliness gone when playing online with friends from other parts of the world,” says Jason Onorad, a video producer for Platformsh. “This came at a time where I was lonely, depressed, had some suicidal thoughts, and had started an acne medication that drastically fluctuated my moods. It wasn't a good time. Finding Kingdom Hearts literally saved my life. I fell in love with Sora, Kairi, and Riku and they quickly became my solace when I had no real friends.”

Characters like Sora and Riku have become so beloved because a generation of players have literally grown up alongside them. Since the original game’s debut in 2002, all the way up to the 2019 launch of Kingdom Hearts III, Sora transformed from a happy-go-lucky young boy to a man confident in his bonds with his friends. Like the Disney fare that inspired them, a relatable coming-of-age story lends a relatable timelessness to these games.

“Dozens of playthroughs later, booting it up still feels like a late-night in my best friend’s living room huddled around the TV. It still feels like magic,” says Jeff Zoldy, a critic and writer at JumpCut Online and NME.

Kingdom Hearts has always put the relationships of its characters at the forefront of its story, and there’s an emotional connection that fans have built over the years. It’s surprisingly similar to Toy Story, in how fans have grown and changed along with the characters over decades.

YouTuber and Twitch Streamer ChronoKatie says Kingdom Hearts has affected nearly every aspect of her life. “Kingdom Hearts was actually the first time a video game made me cry and the first time I realized that games can be just as powerful a medium as any other,” she says. “It bleeds into my everyday life. I will experience things in real life and be like — ‘this feels like a Kingdom Hearts moment.’”

Kingdom Hearts also served as an introduction to more gaming experiences for many fans, many of whom naturally gravitated toward the Final Fantasy series that partially inspired it. Even though they seldom play huge roles in the story, iconic characters like Cloud from FF7 and Squall from FF8 cameo as allies who help Sora along on his journey. Kingdom Hearts 2 even featured Auron from FF10 as a full-fledged party member.

“When FF7 Remake released I found myself nostalgic for the party despite never playing the original, but because I met them as Sora.” says Christian Buckley, an editor at the Unprepared Casters podcast.

Perhaps what’s most remarkable about the legacy of Kingdom Hearts, however, is the way it has pushed people to learn new things or try to forge their own way in gaming. Despite not knowing English, Kingdom Hearts was hugely influential for freelance writer Paolo Kawanishi.

“What amazes me nowadays is that back in that time, I knew almost no English. I had no idea what the characters were saying and why I was in the Lion King world. In Brazil, we have English in our public schools, but it's quite precarious,” says Kawanishi. “Even though language was a barrier, I think Kingdom Hearts was able to communicate some basic ideas to me.”

Since the first game’s 2003 debut, fan communities have sprung up around the world. Sites like Kingdom Hearts Insider have forums filled to the brim with fan art, cosplay, and more. Forums and sites like Reddit show a vibrant fan following from around the world.

Countless people in the gaming industry and adjacent fields say Kingdom Hearts was their primary motivation. George Foster, an editor at The Gamer, says his obsession with video games sprung from a Kingdom Hearts 2 ad that featured an anime boy running around with Chicken Little.

“From then on, I dreamed of the day when Kingdom Hearts 3 would get announced, and when it finally did, I found myself trawling through trailers as slowly as YouTube would allow and trying to find every little detail possible,” he says. “That’s when it occurred to me that I wanted to write about games full-time. It was something that I started pursuing from that moment.”

We talk about anniversaries a lot in the video game industry, but seldom do we really dig into the effect games truly have on shaping the way we think, the way we grow up, and the people we become. Kingdom Hearts has been a formative piece of entertainment for so many people, and this is only a small glimpse at what will surely be a lasting legacy.