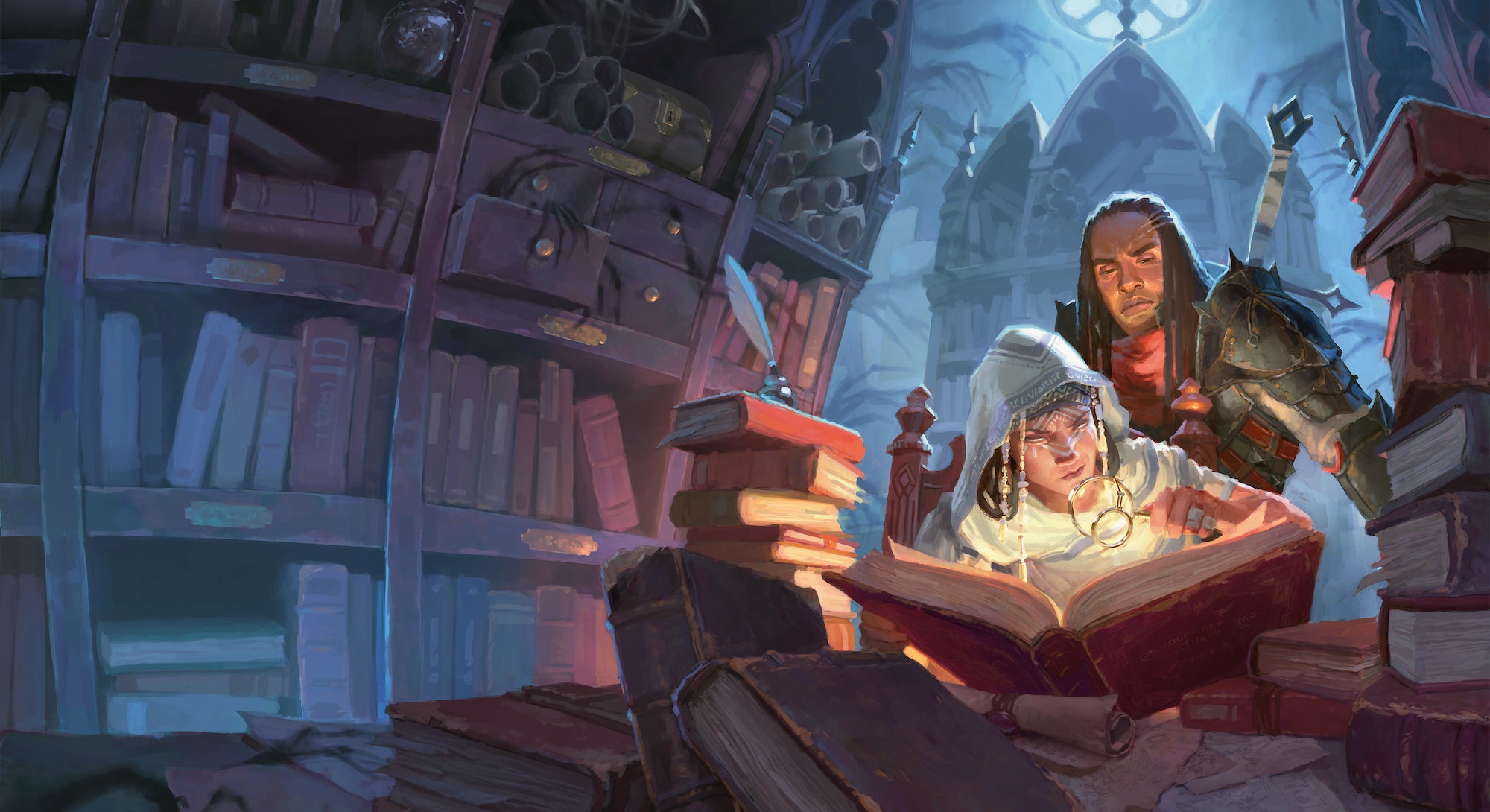 All the best fantasy adventures eventually include some kind of ancient library.

Sagas like The Lord of the Rings, Harry Potter, Game of Thrones, and Avatar: The Last Airbender each feature mystical repositories where characters gain vital knowledge. With Wizards of the Coast's first major Dungeons & Dragons release of 2021, players of the world's greatest tabletop role-playing game will soon have maps, mechanics, characters, and mini-adventures all focused on Candlekeep, a magical library in the city of Baldur's Gate that featured lightly in 2019's Descent Into Avernus.

Wizards of the Coast announced Candlekeep Mysteries on January 12 — pre-orders are available now for release on March 16, 2021 — and while it won't alter any core rules like Tasha's Cauldron of Everything did, this new book already feels like one of the more accessible and interesting additions to the game in recent memory. Rather than a full campaign, Candlekeep Mysteries offers a variety of shorter missions full of intrigue ... and plenty of books. Individual stories can easily be ported into any longer campaign for nerdy DMs and players who want to mess around in a magical library.

Official materials describe Candlekeep Mysteries as "an anthology of 17 mystery-themed adventures each centered around a single book found in the iconic library fortress."

They're suited for adventurers from level 1 through 16, so some of these could be very intense. Each is intended to be played as a one-shot (a short adventure that can typically be completed in a single session of about three hours), which also means they can easily be incorporated into a pre-existing campaign as single missions.

"Candlekeep Mysteries is perfect for Dungeon Masters who are looking to inject new characters, story hooks, magic items, and monsters into their game without tons of prep," an official press release reads. Each adventure incorporates a tome within the library itself that sets players off on a mission. Some adventures take place entirely within Candlekeep. Others will see players tasked with traveling to foreign lands to complete some quest. The only way for anyone to access Candlekeep is to submit a work of literature that the library doesn't already have. Rules are enforced by the cloistered scholar-monks, called the Avowed, that reside there.

Players won't find any new subclasses within Candlekeep Mysteries, but most stories include at least one new stat block of an NPC or monster that can be lifted into any campaign. When asked during a press preview, Senior Story Designer Chris Perkins admitted to mysteries in the style of Scooby-Doo, but a wide variety of authors means that no two stories will be too similar.

"There’s a lot of great magic to find to find in Candlekeep — and a lot of mystery in its stones,” Perkins said.

Who are the Candlekeep Mysteries authors?

Wizards of the Coast spotlighted three of these authors during a press preview: Jennifer Kretchmer, Taymoor Rehman, and Amy Vorpahl.

"The Canopic Being" by Jennifer Kretchmer

"The Canopic Being" takes players to Tashluta, the capital city of Tashalar built into the side of a flooded caldera. The tale incorporates a demi-plane into the mix. The environments also incorporate ramps and magical elevators, offering a reference through which any DM can make accessibility a focus. "I play with prophecy in mine," Kretchmer teased of the story.

A djinni trapped in a book offers a wish spell to adventurers who find a way to release him.

“I have a soft spot for djinni,” Taymoor Rehman admitted during a press preview for Candlekeep Mysteries. His story involves a djinni (or genie) that's been trapped inside a book by its former master, Zikran. And it offers players a Wish if they go through the trouble of freeing it. Within the game, a Wish is "the mightiest" of spells that can "alter the foundations of reality." By the end, players may even have the option of befriending the genie and making it a party companion.

A stolen book leads adventurers to a tower in Candlekeep that is more than what it seems.

In this adventure, players uncover some kind of mystery that leads to a "potential threat to the library itself," Vorpahl promises. She created a novel construct called the Skitterwidget, mechanical constructs about the size of a dog that skitter around. Specifics remain scant, but "Kandlekeep Dekonstruktion" sounds like it may be one of the wackier tales in the collection.