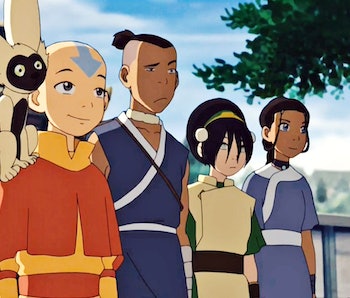 Water and Earth working together. It's no secret that Katara and Toph were two of the most powerful characters in Avatar: The Last Airbender. Over three seasons, Katara mastered her waterbending abilities and even learned the dangerous art of bloodbending. Toph, on the other hand, was a crafty earthbender who was the first to be able to bend metal. However, a bold new theory reveals why Katara and Toph are more powerful than other benders on the show.

We know that Kyoshi, the first avatar to have descendents, went on to have a daughter named Koko, who took over as leader of Kyoshi Island following her mother’s death. Considering that Kyoshi was an avatar who mastered the four elements of water, earth, air, and fire, it’s possible that her descendants are able to pick up the bending skills much faster and better than other benders.

Destiny and family are central themes throughout The Last Airbender. Zuko was seemingly destined to befriend Avatar Aang and train him to master firebending. As potential descendants of Kyoshi, the theorist believes that Katara and Toph were also destined to meet Aang and train him in water and earthbending.

The Inverse Analysis — There’s a lot of merit to this theory. After all, avatars do have descendants and it’s possible that Katara and Toph’s family lineage boosts their abilities as benders over others. Of course, it’s still unclear whether Kyoshi’s daughter had any children at all, so it’s hard to say for sure if Katara and Toph are the avatar’s descendants.

All that said, giving Katara and Toph a backstory for why they’re such powerful benders undermines their accomplishments over the course of the show, instead crediting a past avatar for their abilities. Katara really struggled at the beginning of the show to master her waterbending skills. She grew frustrated that Aang was able to learn how to waterbend so quickly when she’d had the ability to do so for years.

Toph also had to train for some time to properly master her skills and control her earthbending. As one Reddit commenter pointed out, Katara and Toph being "born special" takes away from the message of Avatar: The Last Airbender, which is that anyone can do amazing things no matter the life and family they were born into.

Avatar: The Last Airbender is now streaming on Netflix.