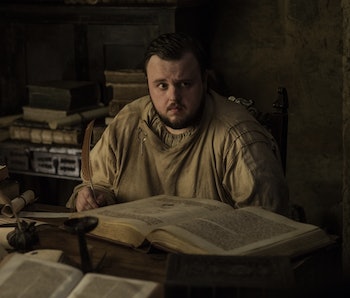 The big discovery that Sam and Gilly made at the Citadel confirmed Stannis Baratheon’s claim that Dragonstone was full of priceless Dragonglass, but Sam also happened upon the image of a familiar-looking weapon in that same ancient tome.

Spoilers for Game of Thrones, the Long Night to come, and the decorative customs of House Targaryen follow.

Sam sneaks into a restricted section of the Citadel’s library after robbing an elderly man of his keys, and he retrieves several books of ancient history in search of resources that might help Jon Snow combat the White Walkers and the army of undead soldiers.

Gilly reads from Legends of the Long Night, which is presumably a historical account of the previous time the White Walkers rose against mankind. Sam, meanwhile, thumbs through a book with information about Dragonglass. “Targaryens used Dragonglass to decorate their weapons without even knowing what the First Men used it for,” he reads aloud. Since the first Targaryen stronghold in Westeros was on Dragonstone, it makes sense that they’d find uses for it.

The book also features a detailed illustration of what’s been popularly referred to as the “Catspaw Dagger,” though the text doesn’t directly identify or address it.

The blade of the Catspaw Dagger is Valyrian steel — the famed metal that can also be used to kill White Walkers — and it also has a dragonbone hilt. Based on its inclusion in Sam’s book, we can also assume it’s adorned with Dragonglass. It might be small, but this weapon is about as anti-White Walker as it gets.

Way back in Season 1, the dagger ended up in the hands of an assassin tasked with killing an injured Bran Stark. How that assassin got it is unknown — the Lannisters were framed, but there’s reason to believe that Joffrey may have been involved. In any case, the assassination failed after Catelyn Stark intervened, and Bran’s direwolf, Summer, made short work of the would-be killer. The dagger eventually moved hands from Catelyn to, presumably, Littlefinger.

Much more recently, the dagger seemingly popped up in the May 30 Entertainment Weekly cover photo in which Arya holds the dagger. Though it’s a bit obscured there, the dagger appeared again in some HBO Nordic promotional materials, and the dagger in Sam’s book is unmistakably the same dagger that will wind up in Arya’s possession sometime soon.

It’s unclear exactly how the dagger might resurface on Game of Thrones, but if winter truly is here, Team Stark is going to need all the Valyrian steel and Dragonglass it can find.

More like this
Entertainment
11 hours ago
Last of Us Just Stole a Trick That Game of Thrones Perfected
By Jake Kleinman
Entertainment
Jan. 30, 2023
New House of the Dragon “making-of” book plunges into the fantasy hit’s creation
By Jeff Spry
Entertainment
Feb. 3, 2023
Knock at the Cabin's Ending is Shyamalan's Most Surprising Twist Yet
By Eric Francisco
LEARN SOMETHING NEW EVERY DAY.
Share: