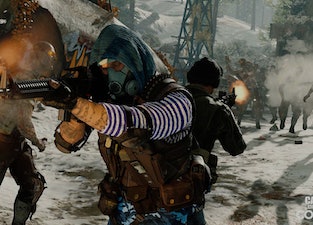 While there's no version of Warzone infested with zombies, Call of Duty: Black Ops Cold War's Zombies mode is free to try for the next week. While it's just one part of a larger package, the mode lets players fight endless hordes of the undead. During the Zombies Free Access Week, trying it out is totally free in the Die Maschine, Cranked, and Onslaught modes.

If you're a fan of Call of Duty's Zombies mode but passed on the latest game in the series, then you should check out this underrated Call of Duty: Black Ops Cold War mode while it's free.

Call of Duty: Black Ops Cold War's Zombies mode is essentially one-third of the whole game, but players can download the Zombie Free Access Week trial by itself on the PlayStation Store or Microsoft Store. It will be live from January 14 to January 21. After that date, you'll have to buy the Call of Duty: Black Ops Cold War, but at least you can carry over your progress.

A Zombies mode has been in every one of Treyarch's Call of Duty games since World at War. While they were telling a somewhat connected and linear story before, Black Ops Cold War's Zombies mode reboots the story and makes some bold gameplay changes.

It follows a CIA Officer Grigori Weaver as he assembles a response team called Requiem (the players) to stop the Russians and zombies after the Soviet Union uncovers a bunker where the Nazis created zombies through experimentation. It connects to the interdimensional plotline the Zombies stories have previously established, but it also takes it in an intriguing new direction that is still unfolding.

When it comes to gameplay, Zombies has also seen some major changes before we even go over the modes. While zombies used to trickle out upgrades and better weapons to players over time, progression and loadouts from Modern Warfare, Warzone, and Black Ops Cold War's multiplayer carry over into Zombies. That means you can use your favorite loadout in any Zombies match.

It also means that Modern Warfare and Warzone players can hop into this free trial and use their preferred loadouts even if they don't own Black Ops Cold War. This definitely changes the pace of Zombies and might feel a bit different than what Zombies fans are used to, but it is still very enjoyable with friends.

Currently, there are three modes: Die Maschine, Cranked, and Onslaught. Die Maschine is your standard wave-based mode where players try to survive for as long as possible. Cranked puts players on a timer, requiring them to kill zombies within a time limit or risk dying. It's a shorter, more frantic take on zombies that's quite fun if you can actually talk with your squadmates.

Finally, PS4 and PS5 players will have access to the exclusive Onslaught mode during Zombies Free Access Week. This mode brings zombies to normal multiplayer maps, and players must stay inside a bubble created by a Dark Aether Orb and kill waves of normal and elite zombies or risk dying. This mode is a bit too slow for my tastes, but it's a nice bonus for those trying the game for free on PS4 or PS5.

Zombies only going to improve over time as well, as Treyarch is consistently updating the mode and even adding a new zombies map in Season 2. Fans of zombies will also find that Black Ops Cold War freshens up the experience, especially if they thought it was getting stale in its latest incarnations. It's free, so you might as well give it a shot if you've ever had fun with zombies.