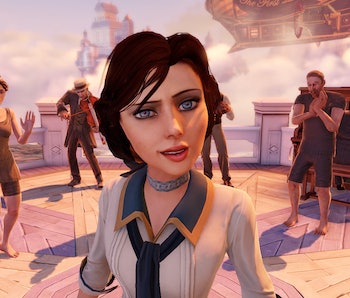 For any Nintendo diehards out there curious about the BioShock games, the May 29 release of BioShock: The Collection on Nintendo Switch is the perfect opportunity to try out some of the most mind-bending and legitimately terrifying games from the late 2000s. If you're a newcomer to the series, consider starting with 2013's BioShock: Infinite instead. It was only outclassed by Grand Theft Auto V and the first Last of Us that year in terms of sheer quality.

Maybe it's because I saw Return of the Jedi before any other Star Wars movie, or maybe it's because I read Harry Potter and the Chamber of Secrets before Sorcerer's Stone. Either way, I'm conditioned to accept "The Wrong Order." Without giving away any spoilers, there are aspects to the overall Bioshock story that make a backward playing order plausible, mainly because Infinite's overall plot hook has nothing to do with the first two isntallments.

BioShock: Infinite is also just plain stunning, and playing its DLC Burial at Sea right after makes for a pretty solid transition into the other two main games.

Set in the year 1912 within an alternate timeline, BioShock: Infinite takes place in Columbia, a city drifting through the sky thanks to a mysterious technology called "quantum levitation" mixed with traditional steampunk stuff like blimps. Columbia was built by the United States government in 1893 to much fanfare, but these days it's caught in the midst of violent upheaval. The city's leader, Zachary Comstock, took the city off the grid and its location was lost to the rest of the world.

You play as Booker DeWitt, a disgraced detective reeking of noir tropes and whiskey, who is sent to Columbia to rescue a young woman named Elizabeth from Comstock's clutches.

Columbia is spacious and brightly lit, a technological marvel and testament to American ingenuity. That means vestiges of rabid patriotism abound, even though the city has descended into a full-on dystopian nightmare. (That's the BioShock house style: sci-fi wonders gone horribly wrong.) Robots and techno-magical dangers threaten Booker at every turn, including a giant Songbird construct tasked with protecting Elizabeth.

You've probably seen the iconic "Big Daddy" from the first two BioShock games, who looks like an oversized diver with creepy glowing eyes and a huge drill for an arm. Songbird is a lot like that, except it can fly. What's scarier than that?

Like previous entries in the series, Infinite also mixes adequate first-person gunplay with various magical abilities, called Vigors here (they're called "Plasmids" in BioShock and BioShock 2). These allow you to electrocute enemies or block bullets, along with some seriously weird stuff, like summon a murder of crows to attack enemies or whip at them with a watery tentacle. These add just enough complexity to combat to make up for the otherwise mediocre gunplay.

Unlike the mostly solo adventures of the first two games , BioShock: Infinite goes to great lengths to establish a sense of camaraderie between Booker and Elizabeth. The way she uses her powers to interact with the environment adds an interesting new mechanic into the mix. Columbia is full of random "Tears" in space-time that overlap with alternate realities. Elizabeth has some measure of control over these Tears, and the game's story explores interdimensional science in mind-boggling ways that the first two games don't even touch.

To say much more about BioShock: Infinite would inevitably veer into spoiler territory, but for anyone who's been curious from afar and perhaps frightening by the sinister vibes of the first games should definitely pick up the collection and play Infinite first on Nintendo Switch.

BioShock: The Collection is now available on Nintendo Switch.