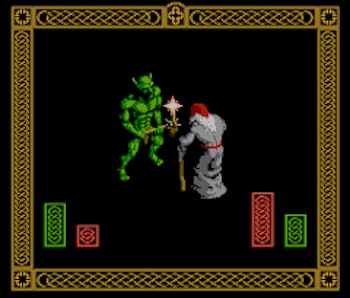 When he was 16 years old in 1983, Will Harvey sold Electronic Arts a program called Music Construction Set. The first sheet music editor for personal computers, Harvey had built the program to integrate music into the video games he was making. The program was a hit and Harvey moved on to college, where he continued to make video games. He wanted to revolutionize gaming with a relatively new medium—the internet, which he saw as a natural place for multiplayer gaming.

That didn’t happen, but what he ended up creating was a fascinating, infuriating, and addictive game. It’s unfair, and made more so by the limitations of the Nintendo Switch. The Immortal is one of the most merciless games on the NES. Even so, I kept coming back for more.

If you’re a paid Nintendo Switch online subscriber, you can play The Immortal right now by downloading the Nintendo Entertainment System app.

The Immortal starts the player off in a small room in a dungeon, lit by a lone candle. Next to the candle is a skull. Approaching the candle reveals to the players a lovely text box in old-world font:

An image of the old wizard Mordamir leaps from the candle and begins to speak: “Dunric, you have come to save me. I am in the dungeons far below. I know I can count on you.” This explains your old teacher's mysterious disappearance, but there is one thing strange about the message... YOUR NAME IS NOT DUNRIC.

Vivid descriptions, hints of mystery, and a wonderful twist at the end. Your wizard looks cool too, a vivid sprite of grey robes and black shadow, topped off by a red hat and holding a sick golden staff.

There are a few sunken tiles in the dungeon. Approach one of them and the game suddenly drops the mystic tone. A new text screen appears: “It might be a good idea to move.” And indeed it is, because if you don’t move away instantly giant, Dune-like worms will emerge from the dungeon and swallow you whole. Game over.

The game did offer a warning, to be fair, but it’s the first and last time that happens. What will happen, again and again, is dying through one of The Immortal’s seemingly endless traps.

Oh, the things that can kill you in The Immortal. There are fireballs coming out of the walls, fireballs coming from the floor, various arrows, impaling pikes, bad-smelling spores (if you plant them, they grow into a deadly fungus that make you explode), trap doors, bats, goblins, trolls, reading runes, invisible enemies, and bait, which will call forth the aforementioned Dune-like worms.

The goblins and trolls offer special one-on-one fighting in a new screen with gorgeous 8-bit characters. These are duck-and-stab fights with a couple options for attack. At time the controls felt a little it feels particularly ridiculous to have them while fighting invisible characters, but that’s what happens.

They will all kill you, over and over, to the extent that it’s easy to become curious about how you are going to die next on your quest to figure out who Dunric is. An old review of The Immortal in Computer Gaming World mentions that the game’s original manual actually included a guide for taking the player step-by-step through the first level, and it’s a shame Nintendo was not able to upload a version of that guide. The Immortal is hard enough, but having to figure out the gameplay from scratch made for an added hurdle. Looking up a walkthrough (like this one) is highly recommended.

While The Immortal was built with a small team, there are signs of this tension all the game, weak spots that could have been filled out with more eyes. While the terrain is hectic, the levels are relatively simple, moving from one door to another. At the time, Computer Gaming World described The Immortal as an “intensely graphic action-adventure masquerading as a CRPG,” noting how the game didn’t allow players any room for error when it came to solving their problems. There’s also a frustrating lack of save points, a problem somewhat mitigated by the Switch’s ability to create Suspend Points.

Harvey eventually nixed the idea for an online Immortal in favor of the game’s plot, which is filled with ancient lore, betrayal, Goblin Kings, dragons, and more. It’s very well-written and compelling on its own terms, something that could stand alongside classic retro game plots like A Link To The Past and Super Metroid.

While it’s a game that could use some polish before being ported, The Immortal is a classic example of how cruel those old games could be while being fun at the same time.