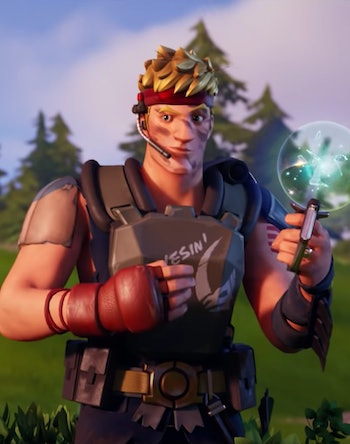 At least once in 2020, a group of 81 musicians converged on Vienna, Austria to contemplate the end of the world.

Galactus — a world-devouring villain ripped right out of Marvel Comics — would soon invade the Fortnite metaverse. While Tony Stark was planning upgrades for the Battle Bus to help in the upcoming showdown, composer Phill Boucher was tasked with writing music for the Nexus War event. Developer and publisher Epic Games has a small team of musicians working on tracks for the hit battle royale game, but Boucher has been the go-to composer for most events and new season trailers since February 2019’s pirate-themed Chapter 1 Season 8.

“We're fortunate that other places in the world have handled the pandemic better than this country has, at least last year,” Boucher tells Inverse of one occasion where he remotely conducted a group of musicians in Vienna. “Their restrictions are a little different than here in the states, and we were able to accommodate an 81 piece orchestra while still adhering to all safety protocols. I listened in and communicated with the orchestra from my studio in Los Angeles and it almost felt like being there.”

Boucher won’t confirm outright if these recording sessions were specifically for the Nexus War event. (“I probably shouldn't,” he says. “I'll leave it to your imagination!”) That said, the Galactus showdown was the most epic stunt Fortnite pulled off in 2020, so it seems pretty likely. Since a cataclysmic in-game event wiped out the Fortnite universe in 2019, its narrative trajectory and scope have increased dramatically.

Boucher spoke with Inverse about making music during the pandemic, Fortnite’s grander Chapter 2 story, and crafting a sound for the villain-turned-hero known only as “The Foundation.”

Chapter 2 Season 6’s “Zero Crisis Story” trailer is Fortnite at its most epic.

What has the trajectory of composing for Fortnite been like over the last couple years?

Typically it’s the big launches with new seasons and new themes — a futuristic season, a Marvel season. We’d establish the tone of what that’s going to be and run with it. I’m a freelancer, so sometimes I feel like I’m kept at arm’s length. There’s a whole team of musicians over there, and I wouldn’t begin to know how many people are working on this massive thing.

I don't think there was any in-game music when I got involved, aside from maybe a couple of stingers. So the music has expanded a lot, with bosses and different areas you can explore. Over time, we’ve built up trust and an understanding of what music can bring to this franchise.

We understand that hearing the players' footsteps nearby and hearing the environment is very important, but where can we use music to drive the narrative or enhance the gameplay?

What was it like scoring parts of the Marvel-themed season?

We’d be remiss if we weren't aware of what Marvel means to people. Even though we're not part of the cinematic universe, when you watch our event, you're talking about multiple realities, you're talking about the largest villain that's ever existed. You don't go small. Every question becomes, “How do we make this even bigger?”

What’s the most challenging composition you’ve done for Fortnite?

I always say, “The next one.” They’re always raising the bar. They've built something massive and it's only because of the hard work and great ideas of a lot of people that are saying, “How do we want to one-up the thing that we did last time?”

How has your creative process evolved during the pandemic?

The difference comes down to not being able to get in a room with someone to have a meeting. When it comes to recording, it's really fun to go down the street to Fox or Warner Brothers and record with a big orchestra — you can get a lot more out of it.

We have a lot of very talented people who have had to learn how to record themselves. But even before the pandemic, when there's no time to go to a studio or there's no budget for an orchestra, you send your tracks over to that one guy you know that's an amazing woodwind player. A day later, you get all these files back, and then you just build it that way.

Tell me about writing the new character theme for The Foundation.

That's a prime example of me not really having any more information than anybody else. We have to tell this whole story in 10 minutes [in the Zero Crisis trailer] and get you to understand who this person is, so by the end of the event you care about what he does and the impact that it has on the larger world.

Knowing that we were introducing a new character and trying to find some kind of sonic identity for him became a lot more about finding interesting instruments.

“It’s got 1,000 voices and I'm just barely learning how to scratch the surface of what it can do.”

What instruments did you use for him?

One of the main ones has sort of become a secret weapon, except a lot of people these days are getting their hands on one: It’s an instrument called a GuitarViol. It's somewhere in between a cello and a guitar. It has six strings like a guitar, but you bow it like a cello. And it's acoustic, but you can also plug it in.

I got it when I was doing Orcs Must Die! because it's based on an instrument from the 19th century called the arpeggione. It has this sort of not-quite-medieval but still primitive history to it. If you plug it in and put some distortion on it, you get this heavy metal guitar sound.

Any time I don’t know what instrument to use on a project, that’s the first thing I try. Because it’s got 1,000 voices and I'm just barely learning how to scratch the surface of what it can do. It's created by this one sort of mad scientist guy called Jonathan Wilson, who makes them all himself, which is why it's usually a ludicrously long wait time to get your hands on one. But let me tell you, it's worth it once you get it.

What are some of the other strange instruments that you own?

It's sort of just become a tradition at this point, every time I start a new project — what's the new instrument that I have an excuse to get this time? I've bought a couple of different guitars for different Fortnite things.

We did some surf music in Chapter 2 Season 3. I wanted a particular Fender guitar to do that.

You can really hear the groovy beachside guitar riffs.

I was looking at what all the old surf guys did and bought the thickest possible strings you could buy. The bridge on the guitar was warping, and the whole neck almost broke from the tension of putting these massive strings on it. But that's what they used to do — and it was cool. When it was done, I had to take those strings off and pay someone to fix what I did to it.

I've also collected different bowed psalteries, which I haven't had a chance to use yet. A lap dulcimer. I've got a small bowed instrument from India that was a gift from a friend. I don't even know what it's called, or how to play it. Anything that sort of looks like a guitar, I convince myself I can play it. I’ll fumble around and get some kind of sounds out of it.

What’s a piece of advice you’ve received that’s stuck with you?

There's a composer friend of mine who said something when I was doing some additional music for him. He said, “Don't be beige.”

Or if I'm doing heavy metal guitars and orchestra, then I'm going to remember what it was like to be 17 and in a metal band when I thought that was the coolest thing in the world. How do I bring that into it? Don't be afraid to have an idea and to put it out in the world.